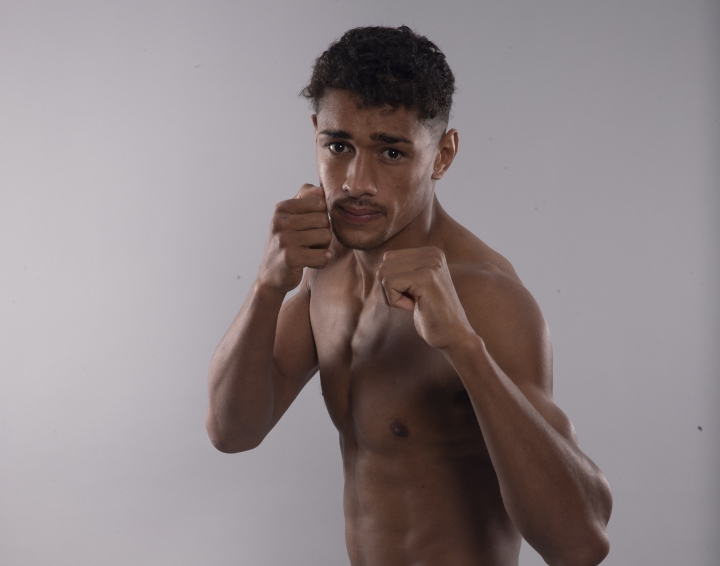 Given its population, it’s perhaps something of mystery, that Coventry – England’s eleventh largest city – has struggled to deliver it’s share of boxing champions, all-action Exhall middleweight ace River Wilson-Bent promises to promptly put paid to that.

‘I want to put this brilliant city on the boxing map,’ says the 27 year old Midland Area Champion who is undefeated in nine, with five brutal stoppages.

‘We’ve twice won the City of Culture, we’ve a brilliant football club…! Coventry City (FC) are getting right behind me. I always go to the matches when my training schedule permits.’

Thus far, it has been a tale of the nearly men for the West Midlands’ second city. Welterweight Bobby Arthur sat briefly sat on the British throne in 1972 but his victory was courtesy of a disqualification over future world champion John H. Stracey who savagely avenged him in an immediate rematch. Amateur sensation Errol Christie, an eight-time national junior champion, promised so much in the 80s only for a suspect chin to be exposed in the more brutal paid fold. In the late 90s, colourful Richie ‘The Tiger’ Evatt was leading up until the 11th round of an IBO featherweight tilt at New York’s Junior Jones before running out of petrol.

The noughties proved a purple patch for Cov boxing. Super-feather Dean ‘Pitbull’ Pithie and light-heavy Neil Simpson briefly conquered the Commonwealth only to capitulate in British title challenges. Another amateur ace Steve Bendall contested British, Commonwealth and European middleweight fights but never quite crossed the line and featherweight Roy Rutherford won a British crown in 2003 only to succumb in his maiden defence. Two years after, middleweight Andy Halder muscled his way to a British title shot but was wiped out in a round by Plymouth southpaw Scott Dann.

‘It’s my ambition to bring big boxing titles to Cov, deliver something none of the others managed. A Lonsdale Belt outright would be a mad achievement.’ states huge ticket seller River.

The Nuneaton-born 6ft 2in roofer concedes that, growing up, he was protected from the city’s rougher edges.

‘Cov’s a lively old town but Dad pushed us into sports. I was always active in after school clubs,’ claims the youngest of three.

‘Though there’s no boxing in the family, my brother was a superstar junior rugby player, on all the elite squads and I was always in his shadow. People told me I wasn’t aggressive enough… !

‘At my school, loads of kids around my age boxed but my mum wasn’t going to allow anyone to punch her little baby in the face so I started off without her knowing in Year 10. From the off, I was absolutely glued to the training. My progress was all about dedication and hard work. I really didn’t have much natural ability. For a start I wasn’t very fit. I became a human punchbag.

‘At school, I was a cheeky lad, liked to push the boundaries, test the water. I got pushed around a bit but six months after starting training, I got into a fight, beat the other kid up and, seriously, everything changed that day. Everyone started being nice to me.’

Though he never advanced beyond the regional titles in a 57 bout amateur innings, the River really started to flow once he began his pro career against Hyde’s Mike Castell in November 2018.

‘I actually wanted a few rounds but it was ‘Here I am! I stormed to the ring as fast as I could, wanted to prove I was serious. Three hundred of my fans bought tickets to see me for just 90 seconds,’ he recalls.

Coached by Brendon Norman, managed by Jon Pegg and promoted by Mick Hennessy, the pride of Cov has certainly sparkled since being unleashed at 10 round Area title level last December.

‘I’ve always been able to use my nerves to rise to the occasion against better opposition,’ says the Midland man who trounced Burntwood’s 6-0 Troy Coleman with a raking right to claim the crown (TKO3), then retained by routing another unbeaten man, Derby’s George Farrell in seven rounds six months later.

‘I’d heard good things about Troy; he was strong gave people lots of problems but I’d always rather box better kids who open up.

‘Against George Farrell, I sold 220 tickets. I was told he was a baaaad guy, a big strong lad, a banger but I work way too hard to worry about others. He was a fit durable kid who shook off some seriously heavy shots. But it was lovely to hear the crowd back.’

With his huge army of Sky Blues boys bringing the noise to every appearance, big things are predicted for the Exhall Express.

‘I’m mandatory for the English and hopefully will fight Tyler Denny in November or December,’ says Wilson-Bent who recently completed a marathon in just three hours, 20 minutes.

‘I’ve developed a winning style that adapts to whatever’s in front of me. I can box long, short or mid-range, I can dance and move or get stuck in. I usually keep them on the end of my long levers but when I smell blood, I go for the jugular.’

He will certainly be the best supported man on the bill when he stars on promoter Hennessy’s Channel 5 screened spectacular at The Skydome in his home city on Friday 10th September when he takes on Bosnian Hardman Sladjan Janjanin in what is expected to be a fiery showdown.

‘Get down to the Skydome!’ concludes River.

‘I’m fighting a 10 rounder against a tough Bosnian Sladjan Janjanin who’s got 29 wins, and 23 stoppages. It’s a good opponent, hopefully for an International title.

‘I’m just a young local lad trying to make something of himself. My support is ridiculous and their noise is crazy. They’ll bring the atmosphere, I’ll deliver the entertainment. Guaranteed!’