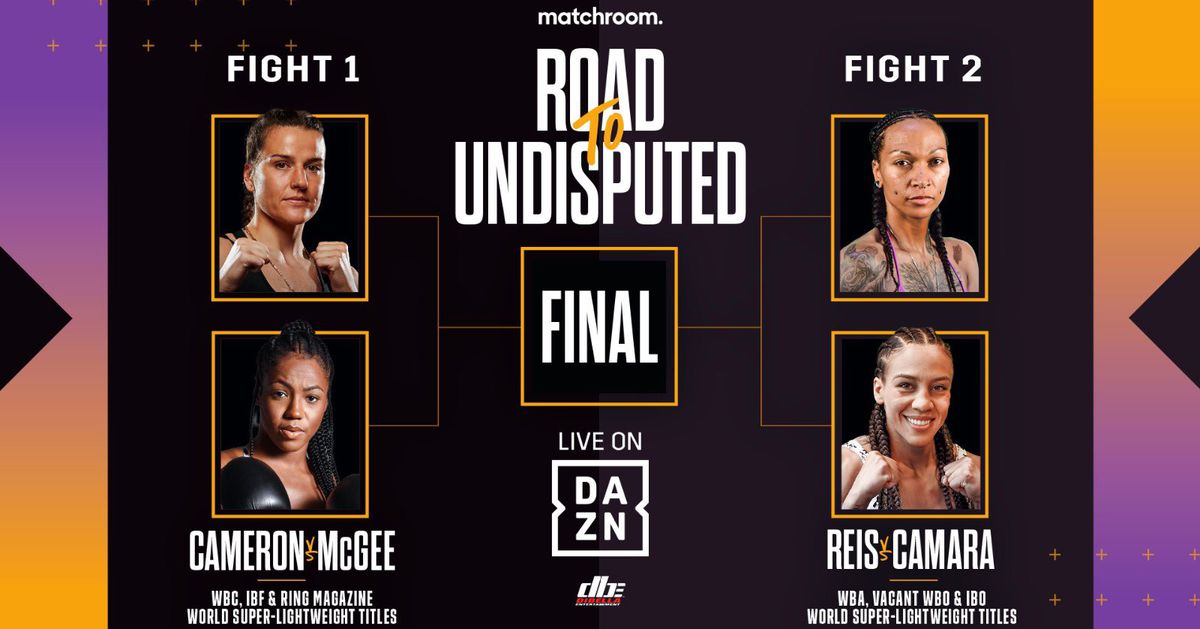 Eddie Hearn and Lou DiBella have unveiled the plan to establish an undisputed womens’ super lightweight champion. On October 30th on DAZN, Chantelle Cameron (14-0, 8 KO) will take on Mary McGee (27-3, 15 KO) in a title unification, while Kali Reis (18-7-1, 5 KO) will defend her belt and seek to add an additional vacant title against Jessica Camara (8-2).

This four-person tournament provides an excellent showcase for the womens’ super lightweight division, with the winner stamping her place in history and opening the door for even more high profile fights in the near future, especially if Katie Taylor is interested in becoming undisputed champion in a second weight class.

Cameron vs McGee is a competitively matched unification bout, as both women make the second defense of their respective WBC and IBF titles. Chantelle Cameron is ranked #1 in the division and Mary McGee is ranked #2, so the Ring Magazine belt will also be there for the taking.

Kali Reis, the #4 ranked fighter at super lightweight, will also be making a second defense of her WBA title after a somewhat underwhelming performance by her standards against Diana Prazak last month. For her part, Jessica Camara earned this title opportunity by upsetting Heather Hardy by way of unanimous decision in May. The vacant WBO belt will also be on the line, meaning that the winner of each matchup will enter the final with two of the four sanctioning bodies’ titles to their name.

𝑩𝑨𝑪𝑲 𝑻𝑶 𝑻𝑯𝑬 𝑬𝑵𝑫𝑺 🏠 Yarde in his own backyard | Artur Beterbiev v Anthony Yarde | BT Sport Boxing
Editor’s Letter: It’s likely to be a long road back for Chris Eubank Jnr
Hungry rabbit… 🤣 Usyk is a different breed 🍔
Benavidez vs Plant Is ON for March 25 on SHOWTIME PPV in Las Vegas
De La Hoya Eager To Sign Edgar Berlanga To Golden Boy: ‘Come Talk To Us, Or We’ll Fly To You’