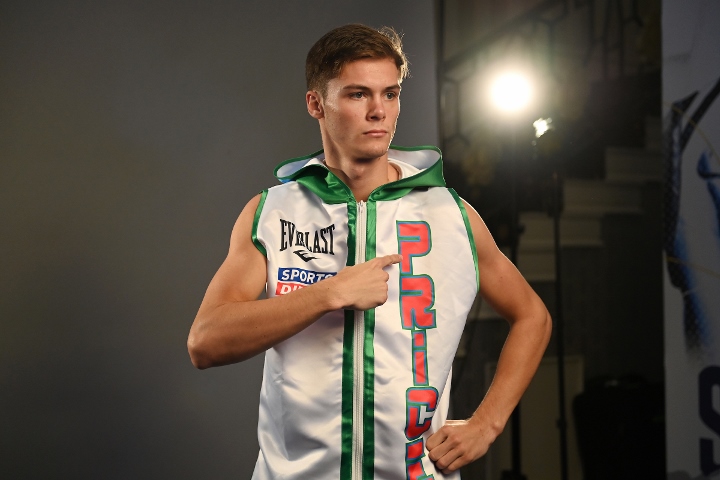 Hopey Price turned in the performance of his short career to date as he battered Zahid Hussain to defeat in the second round of their scheduled ten-rounder on the Warrington-Lara undercard at Headingley.

The all-Leeds encounter looked a serious test for the young Price, but Hussain never really recovered from a wonderful short right hook at the end of the first round that dropped him for the first of two knockdowns.

This had been a big chance to impress for Hussain, a former Central Area featherweight champion (who is now 16-2), but Price, 21, looks some talent and is freakishly tall for a super-bantamweight.

Price boxed well at distance for the first round, but just before the bell he landed a stunning right hook that dropped Hussain almost in slow motion as his legs just gave way.

Hussain’s corner were slow to get out of the ring at the start of the second as they tried to buy him some extra second to recover, but if Price had any thoughts of getting some rounds in, a clash of heads that left them both badly cut over the left eye meant he got a move on.

A straight left had Hussain clinging on and while he walked Price into a big right, two lefts sent Hussain down again midway through the round. There was to be no escape this time, as he looked on unsteady legs after getting caught by two more long lefts, referee Howard Foster stepping in at 2:33 of the second round. Price is now unbeaten in six, two by stoppage. The IBO international belt was on the line.

One-time top class Great Britain international Jack Bateson is now unbeaten in 14 fights as a professional as he outpointed Felix Garcia in a super-bantamweight six-rounder, although he had to climb off the floor before having his arm raised.

Bateson has hopes of a British title shot, but it was his ability as a ticket-seller that ensured him a place on the Headingley undercard. Garcia, from Nicaragua via Spain, looked dangerous at times, but was ultimately outboxed.

Bateson was on the floor at the end of the second round, referee Mark Lyson scoring it as a knockdown, much to Bateson’s annoyance as a punch landed to the body as he seemed to trip himself up. But that seemed to encourage Garcia, who landed with a big swinging left and right early in the third round.

For the last three rounds, though, southpaw Bateson controlled the action behind his jab and a frustrated Garcia was warned after throwing Bateson to the floor in the fifth. Lyson scored it 58-56.

Welterweight Brandon Stansfield won his second professional fight more than two years after he won his debut as he boxed his way to a four-round decision over MJ Hall. Stansfield started well and landed cleanly throughout, especially with the right uppercut, but after Hall did not crumble in the first round, Stansfield looked content to get the rounds in. Referee Steve Gray scored it 40-36.

Mali Wright made a successful debut as Antony Woolery was pulled out after the second of their light-heavyweight four-rounder.

Wright, from Leeds, boxed tall and was accurate with his shots, hammering home some good rights in the first round. Early in the second, it seemed Wright was on the verge of stopping Woolery as he trapped him on the ropes, but Woolery rode the storm and came back firing. He was never able to force Wright backwards, however, and his corner retired him at the end of the round. The referee was Mark Lyson.

Panel: How much interest do you have in seeing a rematch between Liam Smith and Chris Eubank Jnr?
Eubank will “let the dust settle” before deciding on Smith rematch
Nery vs Hovhannisyan eliminator targeted for Feb. 18 in California
The BN Preview: Joseph Parker and Jack Massey are The Odd Couple at heavyweight
Artur Beterbiev Ready For Weekend Throwdown With Anthony Yarde