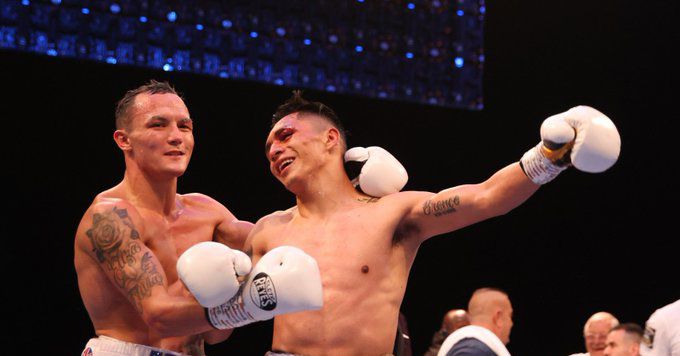 Josh Warrington didn’t want to wait or go for a tune-up after his shocking upset loss to Mauricio Lara back in February. He wanted to run it back immediately, and 20,000 screaming fans in Leeds wanted to see him settle the score.

Unfortunately, a clash of heads in the second round brought a very early end to the action. Lara (23-2-1, 16 KO) walked away with a gruesome cut over his eye, the doctor called it off before the start of the third, and everyone went home early with a frustrating but appropriate Technical Draw.

After the fight, Warrington (30-1-1, 7 KO) repeated that he still wants to get “the slate clean”. The fight was promoted under the slogan “Repeat or Revenge”, but it looks like we’re going to get a Rewind and a third showdown between these two.

No complaints here, as the stoppage was the right decision, and the action was lively for as long as things lasted. I’ll definitely tune in for the next chapter.

Not a lot of highlights given that the fight ended after 6 minutes of action. Perhaps you might enjoy seeing Warrington’s 5 minute ring walk instead?

The story of this fight was the story of pretty much every Katie Taylor fight. No disrespect to Jennifer Han (18-4-1, 1 KO), who didn’t run and didn’t surrender, but Taylor (19-0, 6 KO) demonstrated yet again that she’s a clear level above yet another opponent.

Han gave a solid effort. I credited her with the fourth round, and she came out aggressively in the ninth after getting charged with a knockdown in round eight.

But, all three judges awarded Taylor a clean sweep, and they were certainly valid scores.

At this point, it looks like age is the foe likeliest to get the best of Katie Taylor. She remains undefeated, she remains undisputed, and she’ll remain at the top of the BLH Women’s P4P rankings.

Connor Benn came out throwing hot and heavy in the first two rounds, but wasn’t actually able to land much. Adrian Granados slipped and countered crisply, making his trademark crop circles along the way. Meanwhile, Benn (19-0, 12 KO) threw haymakers at a spot a few inches away from wherever Granados (21-9-3, 15 KO) happened to be at the time.

Benn finally started catching Granados with power shots in the third, and the activity took a clear turn. Granados shifted his focus to making Wassily Kandinsky paintings with his feet, much to Benn’s frustration.

Benn chased, and occasionally tried to taunt and shame Granados into some head-on activity. Granados threw on the move and occasionally settled in for a flurry of punches, but never really seemed to challenge for rounds in a serious way.

The judges saw it widely in favor of Benn, and BLH had it 98-92 the same way.

This one had the potential to steal the show, and we saw a fun, well matched and active start. First three rounds were all borderline swing rounds on my card, which was more generous than most of our live coverage followers were willing to be towards Jovanni Straffon.

Straffon spent the rest of the round in reverse, but absolutely refused to fall down. Hughes pressed and chased and landed hard, but Straffon somehow kept himself vertical. I credited Hughes with the 10-8 anyway, and two of the official judges did the same.

Hughes stayed disciplined and worked from distance, which effectively took away Straffon’s only path to victory. Every round in the second half of the fight followed the same pattern: Hughes used that movement and defense to frustrate Straffon, and then landed enough clean shots of his own to win the round clearly. One judge gave Straffon one round, and Hughes took the night on wide scores.

A somewhat questionable result in the opener, where Ebanie Bridges came in as a heavy favorite, and looked the part early. Bridges (7-1, 3 KO) spent the first few rounds advancing and throwing at her pleasure, and Mailys Gangloff (5-3, 2 KO) didn’t have the size or power to hold her off or make Bridges regret any aggression.

Gangloff showed some impressive technical ability in the middle stage, using a nice variety of combinations and angles to pick up rounds. That precision helped her when Bridges started showing an injured hand issue in the sixth round, favoring her left and worrying her right hand after any landed punches with it. Gangloff appeared to take control, and a one-handed Bridges didn’t have the resources to fight her off.

That’s not how the official judging saw it, though, and Bridges takes home a points victory. Credit to Bridges for gritting her teeth, fighting for each round, and sticking around to the final bell. But, BLH had it 77-75 for Gangloff.

Chris Eubank Jr “YOU CHEAT ON YOUR WIFE!!” vs. Liam Smith | #shorts
‘AFTER CONOR BENN, AM I STILL THE BAD GUY?’ – Eubank Jr readies for GGG & Dismisses Smith
BN Verdict: “Basic” Liam Smith does to Chris Eubank Jnr what nobody else has managed to do
When it comes to Artur Beterbiev, sparring partner Callum Simpson says: “Believe the hype”
Artur Beterbiev on Dmitry Bivol: ‘Of Course, I Want This Fight’