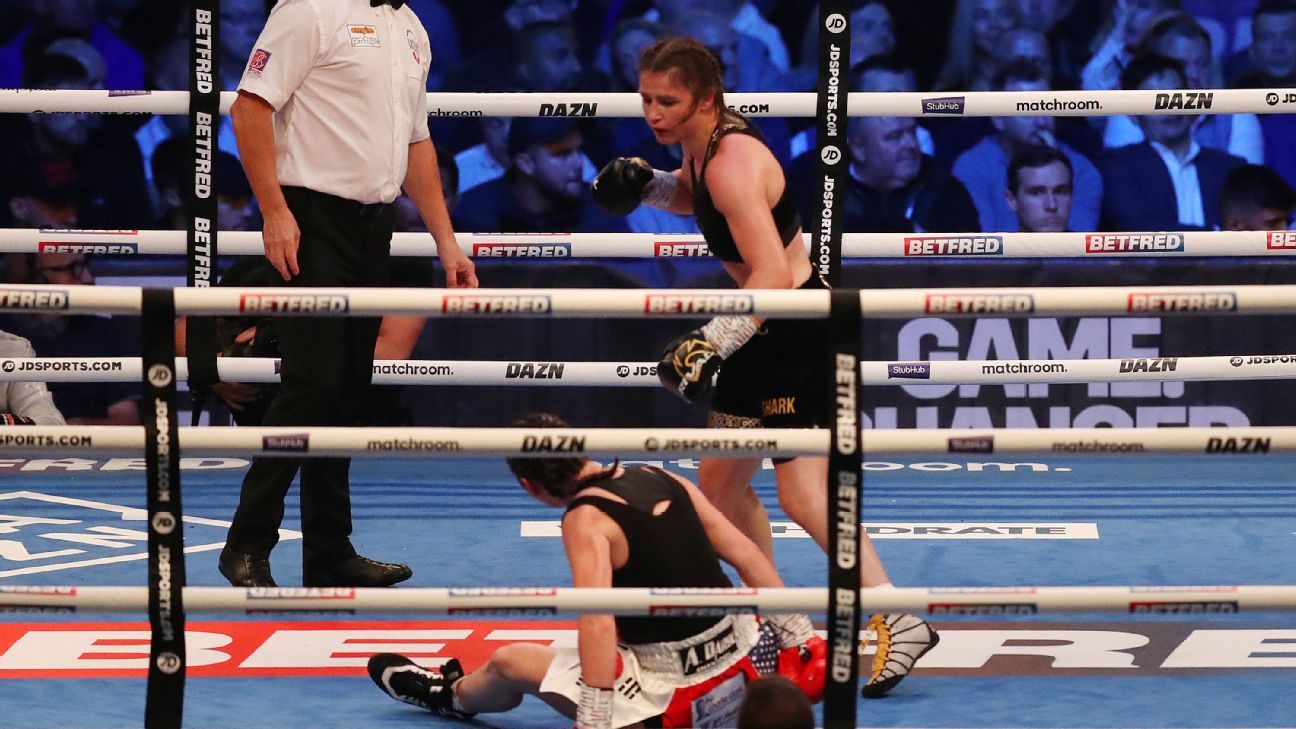 Katie Taylor’s reign as the queen of the lightweight division — and women’s professional boxing — might not have been in doubt Saturday, but she had to settle for a steady rather than stunning win over Jennifer Han.

Taylor (19-0, 6 KOs) defended all four world lightweight titles against American Han (18-4-1) by unanimous decision in front of a crowd of 20,000 at the Headingley Rugby League Stadium in Leeds, England.

Taylor, from Ireland but based in the United States, is one of the biggest stars in women’s boxing and currently No. 1 in ESPN women’s pound-for-pound rankings, decisively had quicker hands and slicker skills as she punched her way to scores of 100-89 on all three scorecards, after flooring Han with a short right hook in the eighth round. The scores were perhaps a bit harsh on Han, but Taylor was an impressive winner, as usual.

Han, 38, from El Paso, Texas, stepped up two weight classes after making four defenses of the IBF featherweight title between 2015 and 2018. Taylor, also a world champion at super lightweight, has been pushed close in points win over Natasha Jonas and Delfine Persoon in the last year but this was more comfortable for the women’s pound-for-pound No 1.

Victory moves Taylor closer to a potential pay-per-view event with Amanda Serrano, No. 3 in ESPN’s women’s pound-for-pound rankings and in good form after last weekend’s dominant points win over Yamileth Mercado in defense of her WBC and WBO world featherweight titles.

Puerto Rico-born, Brooklyn-based Serrano (41-1-1, 30 KOs), 32, has won world titles in a staggering seven weight divisions and was twice lined up to face Taylor last year, but it failed to happen due to the COVID-19 pandemic and the boxers’ teams failing to agree terms.

“I want the megafights and to be involved in the biggest fights out there,” Taylor said. “I’m confident I will end my career as unbeaten and undisputed world champion.”

Taylor, the 2012 Olympic gold medalist, who trains and lives in Vernon, Connecticut, took her time to land regularly as Han adeptly moved away from trouble.

Han was not daunted by the occasion and had plenty of energy and movement, which tested Taylor. The Irish boxer landed a stiff right hand in the fourth round as she became increasingly dominant in the later rounds.

Han, who gave birth to a second son earlier this year, impressively disrupted Taylor and complained that she slipped in the eighth round when Taylor was awarded a knockdown.

But Taylor was just too quick for Han, who never looked like threatening the Irishwoman.

“I knew there was no level for complacency, I knew she was a threat,” Taylor said. “She was good for survival, she was very slippery, but I got a shut out [decision] and you can’t get better than that. I’m willing to fight anyone, at any weight.”

Granados (21-9-3, 15 KOs), 32, from California, suffered defeats to Danny Garcia (by KO) and Robert Easter in 2019 and his experience thwarted Benn the stoppage he craved.

“It was very frustrating… he was on his bike the whole fight, I had to hunt him down,” Benn said.

Benn, who grew up in Australia and Spain but is now based in England, looked good from early on, landing heavy right hooks on the front foot.

Benn continued to be the aggressor in the second, landing a looping right hand in the last minute, then landed a sweet left hook late in third flush on the chin.

Granados was caught with hooks coming forward in the fourth round, but got his jab going at the halfway mark to make Benn work for his openings.

Benn, who turned professional with limited amateur experience in April 2016, was not as successful with his attacks later on until he landed two good right hands at the end of the eighth.