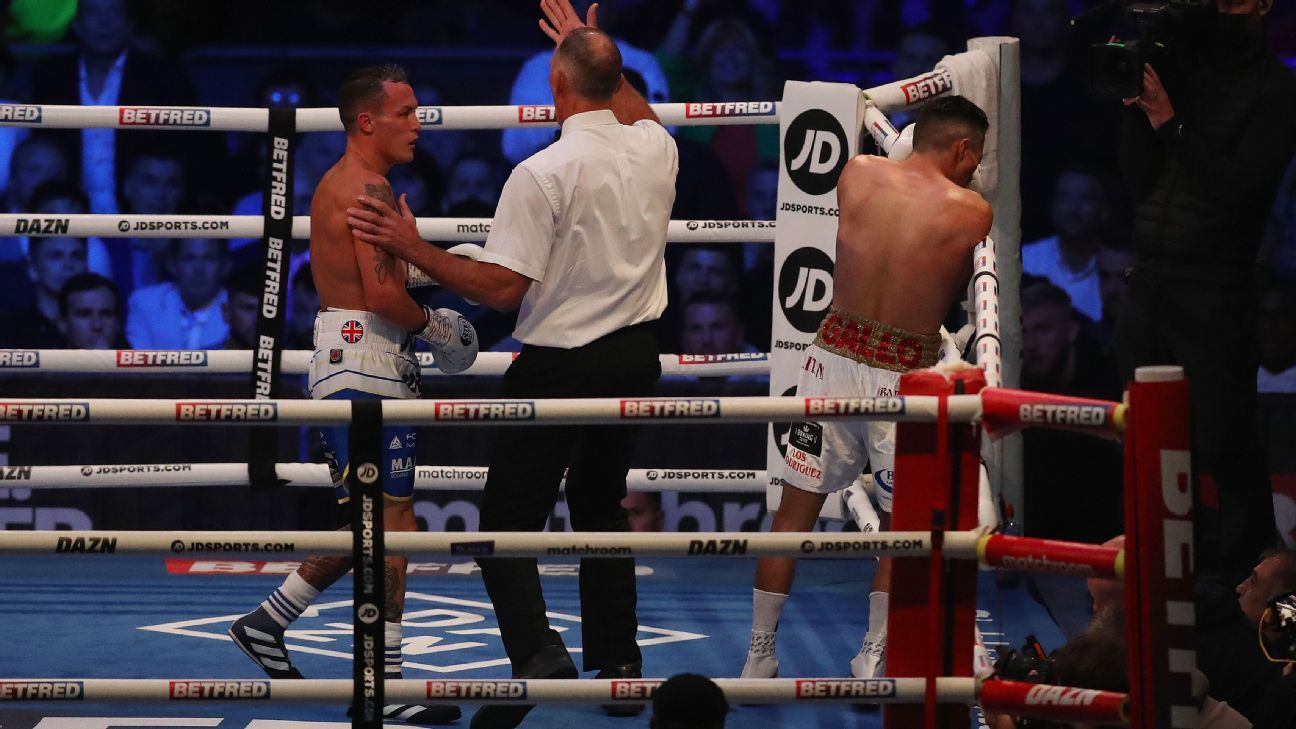 Josh Warrington was left frustrated after his bid for revenge against Mauricio Lara ended in a technical draw Saturday.

The fight was just getting going when Lara sustained a nasty cut above his left eye in the second round, caused by a clash of heads. The cut was so severe that referee Steve Gray decided to stop the fight after the second round.

Warrington, the former IBF world featherweight champion who began the year as ESPN’s No 1 at 126 pounds, was looking to avenge a shock ninth round stoppage loss to Mexican Lara in February.

“All these people have paid money to see me get redemption. I thought I had opened him up with a punch in first round. After first round I thought how did I get knocked out by him. I feel that with this crowd here I was eager to get into a scrap and that was always going to come. I need to get the slate cleaned.”

Matchroom promoter Eddie Hearn described the cut as “horrific”, which prematurely ended a fight after a lively two rounds in front of a crowd of 20,000 at the Headingley Rugby League Stadium in Warrington’s home city of Leeds, England. Hearn, like Warrington, wants a third fight with Mexican Lara.

“I would still love to do that fight again,” Hearn said.

“I would like to see Josh Warrington fight as soon as possible.

“But that cut will take months to heal. We will look to do that fight again early next year… but there’s not reason why we should wait until then (for Warrington to box again). Originally (IBF world featherweight champion) Kid Galahad was a fight Josh did not want to entertain. Does Josh want to have another go, I don’t know.”

Warrington (30-1-1, 7 KOs), 30, voluntarily chose to give up the IBF world title in January so he could pick his fights this year but defeat to Lara, who had never competed at elite level before, changed those plans.

Warrington wants to fight in the United States against American Gary Russell Jr, the WBC featherweight champion, rather than a rematch with English and Yorkshire rival Galahad, who he defended the IBF belt against by split points decision two years ago.

But after this outcome, a third fight with Lara might come before a world title fight for Warrington.

“Especially after the first round I thought I would have an early night but not in this situation,” Warrington said.

“I can only apologise but we will have our redemption eventually. I felt like I could cry when it got waved off. I hope we can get it.”

In the little action there was, Warrington’s defense was a lot tighter second time around against Lara and he landed good single shots in the first round. However, Lara (23-2-1, 16 KOs), 23, from Mexico City, showed enough to suggest his power will make it a difficult fight for Warrington.

“Yarde is the special one, not Beterbiev,” says Tunde Ajayi
Beterbiev Stops Yarde In Eight
AWKWARD! Artur Beterbiev BITES BACK at question ‘YOU WANT TO BE ANGRY WITH US?!’ | #shorts
Sweet D Files: Is pay-per-view driving fans away from the sport?
Bohachuk vs Gallimore: Live updates and results NOW!