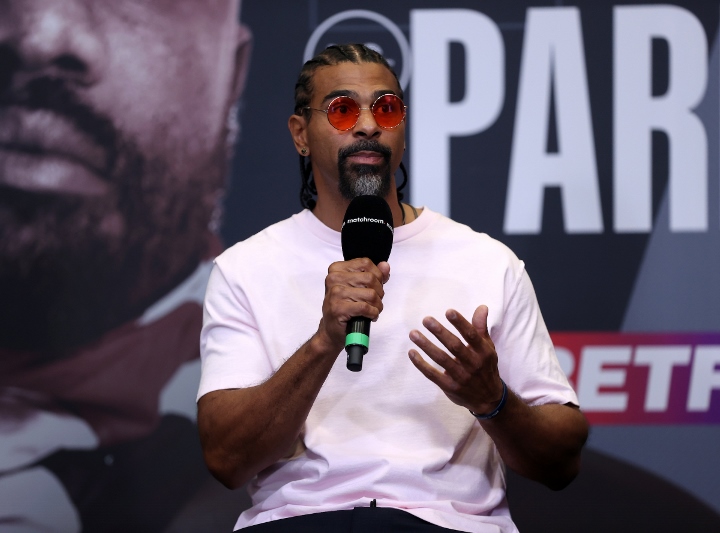 David Haye isn’t trying to convince himself—or anyone else—that anymore will come of his boxing career beyond his next ring appearance.

The former lineal cruiserweight champion and heavyweight titlist returns to the ring presumably for one night only as he faces unbeaten light heavyweight and full-time entrepreneur Joe Fournier. The two will meet in a heavyweight matchup scheduled to take place September 11 as part of Triller Fight Club Pay-Per-View event live from Seminole Hard Rock Hotel & Casino in Hollywood, Florida.

“I’m preparing Joe Fournier the best I can. But for the moment, I’m not making future plans,” Haye admitted during a recent virtual press conference to discuss the matchup. “I’m not looking past September 11.”

Haye (28-4, 26KOs) retired from the sport in May 2018, following a second-straight stoppage loss to Tony Bellew. The former two-division titlist—who turns 41 in October—decided the time was right to climb back through the ropes one more time. The decision came after he was approached to share the ring with Fournier (9-0, 9KOs; 1NC), a longtime friend and former sparring partner of Haye who appears on his second straight Triller PPV after stopping reggaeton star Reykon in a sanctioned pro bout this past April 17 at Mercedes-Benz Stadium in Atlanta, Georgia.

Fournier, 38, agreed to face Haye at heavyweight but remains an aspiring light heavyweight prospect who aspires to further his own career after returning earlier this year. A far different set of goals are in mind for his upcoming foe.

“To be brutally honest, this whole thing was a one-off,” Haye noted. “This whole thing was five weeks of training. I go chips all-in for training. I canceled [time] with my family, put our plans for holiday on hold. That wouldn’t allow me to best prepare for this bout. Every session I’ve done, it’s been an improvement on the prior session. I can feel myself improving in a way I haven’t felt in a long time.”

Haye scratched out a terrific career for himself, only to be hampered by injuries. He would eventually get to a heavyweight championship clash with Wladimir Klitschko in July 2011, more than two years after having to bail from an originally scheduled June 2009 clash due to suffering a back injury. By the time they fought, Haye alleged a broken toe in dropping a lopsided unanimous decision to Klitschko in the final world title fight of his career.

Just five more pro fights would follow over the next seven years, including a stoppage win over Derek Chisora in July 2012 before losing out on a fight with Mahmoud (Manuel) Charr due to a hand injury in 2013. The fight would never come back around, nor would two separate shots at facing then-unbeaten rising contender Tyson Fury, with both instances ending with Haye bowing out due to separate injuries to the point of medical experts advising him to retire.

Haye never quite declared himself as done with the game, though going more than three years between fights before returning in 2016. The final two wins of his career would before enduring back-to-back stoppage defeats to Bellew.

The first meeting in March 2017 saw Haye fight through a torn Achilles tendon from round six through the bitter end in the eleventh round. The rematch was delayed by several months to allow Haye to recover from an injured arm, though only prolonging the inevitable as he was stopped inside of five rounds in May 2018 which prompted an official retirement one month later.

Officially, Haye is eligible for voting consideration into the International Boxing Hall of Fame, which requires a three-year retirement/inactive period. That stretch remains in effect, at least for now as his upcoming clash with Fournier was not approved by the California State Athletic Commission when the show was taking place at Staples Center in Los Angeles. Nor has it yet received sanction as a pro bout under the authority of the Florida State Boxing Commission.

Whether a real fight or an exhibition, the main concern of Haye is proving to the world—most importantly, to himself—that he is capable of finishing what he started regarding preparation for this event.

“When you see me in the ring, when you see me move around, there will be people asking, ‘Why can’t you continue,’” promises Haye. “Depending on how—I can’t go by the training camp because prior to the two fights with Tony Bellew, I felt good and very confident that I was going to win the fight and move on to a world title fight. It didn’t happen.

“I’m not going to make any unnecessary predictions that yes, I’m going to make a comeback. I feel better than I have been. But when that first bell rings, I’m aware that anything can happen.”