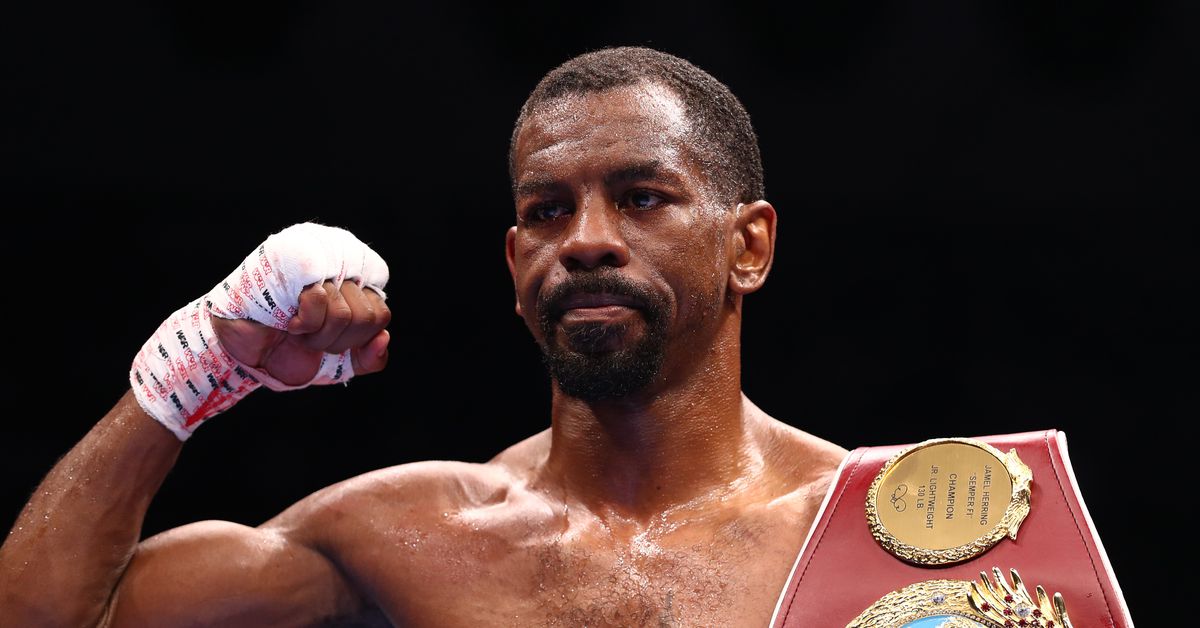 There will be a press conference held in Atlanta on Thursday, Sept. 9, to hype the Oct. 23 clash between Shakur Stevenson and Jamel Herring, the WBO featherweight belt-holder. Yes, Herring has the strap, but Stevenson will be regarded as the favorite by a heavy majority of fans and pundits.

Herring (23-2, 11 KO) doesn’t seem like he’s crushed by that possibility. The Marine, who was born in Long Island and captained the 2012 US Olympic squad, told Bad Left Hook that he is aware of the dynamic, that people see Shakur as a big-time favorite.

“I honestly believe it could be one to remember, and also another situation where I’m possibly being looked over again,” Herring said. “But at this point I’m used to that role and position, so it doesn’t bother me.”

As a fan, I like the sound of “one to remember.” But why does Herring think that? He’s a smart boxer, not a brawler/trader, and Shakur is a defensive wiz.

“Because due to this being another big fight on my resume, it’s a chance for me to put on another big performance,” he continued. “I was counted out coming into 2021, and I’m sure I’m being counted out here to end the year, but as we have seen with the Carl Frampton fight, I silenced critics.”

The part of me that appreciates when top fighters get tested wondered aloud, could we see Herring taking it to Shakur, forcing him to fight more than other foes have? Of course, that is easier said than done.

Stevenson — a 2016 Olympian who looked to be improving and building his buzz-worthiness before turning in a couple workmanlike but dispassionate victories — is very, very skilled. Defensively, I asked Herring, is he one of the very best active boxers?

“He’s one of the best today hands down,” Herring said. “I never take anything from him regardless of what’s been said in recent memory from his side. I just have to be smart and more importantly believe in me. I can’t worry about where others fell short, plus I have a great group of men behind me.”

I begged, a tiny bit, for a hint of how Herring might look to interrupt Shakur, disrupt that rhythm he gets into.

Herring didn’t give up much. “My team and I are working on several game plans because we know if you’re facing a good individual they’ll know how to make adjustments throughout the fight. All I can say is that I have to fight every minute of each round of the fight, which will be a key factor down the stretch.”

I turned attention to the forthcoming press conference, and asked if Herring is planning on being the “humble warrior” during this promotion, or would he maybe consider using his maturity and seasoning “edge” in a bid to unsettle Shakur? Stevenson is young, and is still learning hard lessons that Herring grappled with more than a decade ago.

“I just plan on being me,” Herring said. “Shakur can say whatever he wants to say to build this fight up or whatever. My main focus is me, overall I do hope after everything’s said and done, he can mature a bit more. Because if we’re all being honest, this path he’s been on isn’t winning anyone over, and it’s sad because Shakur is really not a bad individual.”

Showtime Merges With Paramount+. Will It Stop Broadcasting Boxing?
STILL LIONS IN THE CAMP 🦁 Inspirational Anthony Yarde Post-Fight Interview | #BeterbievYarde
AWKWARD! Artur Beterbiev BITES BACK at question ‘YOU WANT TO BE ANGRY WITH US?!’ | #shorts
What’s next for Navarrete if he wins the 130-pound title? Is interest waning for Spence-Crawford?
Logan & Mike ROAST Each Other! | #Shorts