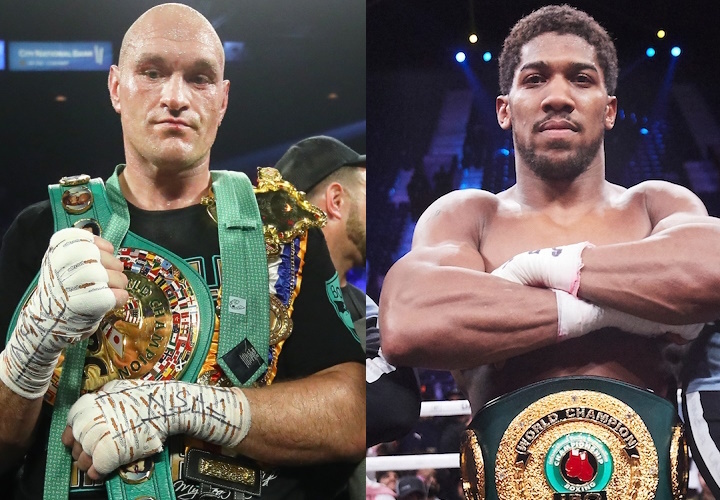 WBC heavyweight champion Tyson Fury has admitted that he was not optimistic when a deal was in place to face Anthony Joshua in an undisputed title clash.

There had been a deal in position to fight Joshua – who holds the IBF, IBO, WBA, WBO titles – on a date in August in Saudi Arabia.

Before the deal could get finalized, an arbitrator ordered Fury to honor a rematch clause due to Deontay Wilder.

Fury will face Wilder in a trilogy fight on October 9th at the T-Mobile Arena in Las Vegas.

Joshua will make a mandatory defense against Oleksandr Usyk on September 25 at Tottenham Hotspur Stadium.

While Fury always had doubts about the contest coming off, he does expect to face Joshua at some point down the line.

“I have never been optimistic about this fight happening, even when the fight was agreed initially and we were set to go at it in Saudi Arabia,” Fury told The Overlap.

“But I still wasn’t optimistic about it, and guess what it never happened, but I do feel this fight will happen eventually. I do think sooner or later it will happen, even if we have to go completely AWOL and bin all the belts to make the fight happen between us for whatever reason. I’m willing to do that, I’m not sure about him.”

In a prior interview, Joshua explained that he would be on board with dropping world titles in order to secure a showdown with Fury.

“Without the belts? I rate that. That’s what I’m talking about. We’ll fight, 100 percent, let’s do it,” Joshua said to Sky Sports. I’ll smoke that guy, I will, it’s annoying.

“He’s been doing it for years, however, I just know on my end, and my management team and my promoter – we done everything we can to make this happen and as long as I’m champion, I’ll compete with anyone. I’ve got a tough challenger coming up now; a great fighter.”

De La Hoya Optimistic that Tank-Garcia Will Lead to More Collaboration With PBC
Eight to Remember: A brief history of top light-heavyweight fights in the UK
Tyson Fury: Tommy has to take Jake Paul “really seriously”
‘CONOR BENN IS THE BAD GUY! Cancellation benefited CHRIS EUBANK JR’ – Roy Jones
Panel: How much interest do you have in seeing a rematch between Liam Smith and Chris Eubank Jnr?