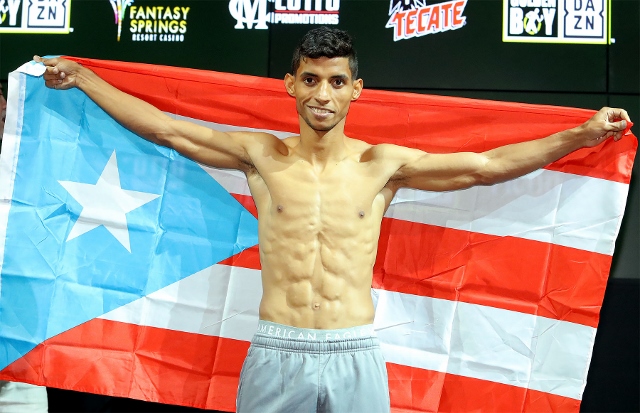 Angel ‘Tito’ Acosta didn’t imagine it would take this long to land his next title fight, though understands that everything happens for a reason.

Quite a lot has happened in the two-plus year period since the rangy knockout artist from San Juan, Puerto Rico last held the WBO junior flyweight title. Acosta has since moved up to flyweight, where he has won his last two fights. The next adventure for the 30-year-old will come this Friday, when he challenges Japan’s Junto Nakatani (21-0, 16KOs) for the WBO flyweight title live on ESPN+ from AVA Amphitheater at Casino del Sol in Tucson, Arizona.

“I’ve been waiting for a year for this fight with Junto Nakatani. I’m just ready, the time is now,” Acosta told BoxingScene.com. “Nakatani is a tough fighter, his record speaks for itself. He’s a big puncher and is hungry to retain his title. I’m a big puncher who is hungry to become a two-division world champion.”

Acosta (22-2, 21KOs) was afforded a homecoming fight for his most recent start, even if it came without fans in attendance. It didn’t deter his performance, earning an eight-round win versus Gilberto Mendoza this past March at Albergue Olimpico in Salinas, Puerto Rico. The fight was his first since the pandemic along with means to shake off the rust while waiting out his due title fight versus Nakatani.

Original plans called for a May 29 clash in Nakatani’s native Japan, only for Covid restrictions prompting a shutdown and canceling the event. Both boxers were put on ice until their respective promoters—Teiken Promotions for Nakatani, and Promociones Miguel Cotto and Golden Boy Promotions for Acosta—were able to arrange for the fight to land on this weekend’s show presented by Top Rank.

Nakatani-Acosta was always tabbed by most experts to ultimately steal the show—and for the right reasons. Acosta is aware of those expectations, though he has loftier goals of his own in the end.

“It’s going to be a great fight and I’m going to bring that world title back home to Puerto Rico,” vows Acosta. “That’s my motivation.”