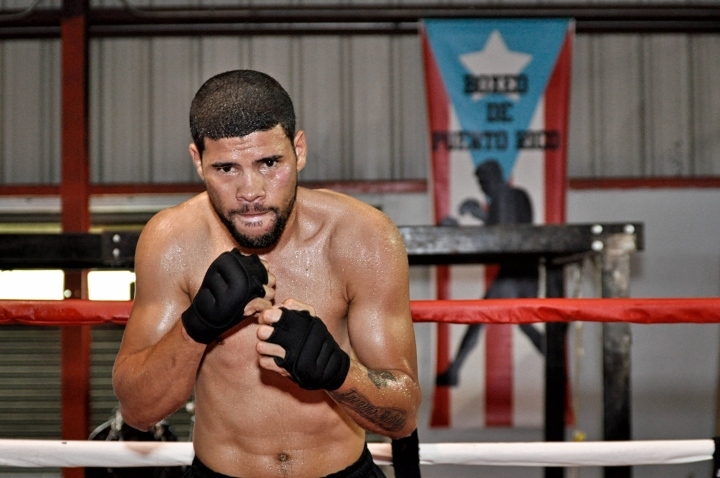 The former two-division titlist was formally charged with seven total counts of aggravated assault and physical and psychological abuse, stemming from four alleged incidents of gender violence against Andrea Ojeda Cruz, the boxer’s ex-girlfriend who recently went public with her accusations. Lopez surrendered to authorities in his Caguas, Puerto Rico hometown Tuesday evening, and was formally charged Wednesday in Caguas Court.

Lopez, 38, was charged with six counts of physical assault under the domestic violence statute, along with one separate count of psychological abuse. All seven charges were introduced during the preliminary probable cause hearing after prosecuting attorney Jaime Perea Mercado interviewed the victim, at which point the prosecutor’s office claimed the boxer was in violation of Sections 3.1 (Abuse) and 3.3 (Abuse by Threat) of Puerto Rico’s Domestic Abuse Prevention and Intervention Act, commonly known as Law 54.

Judge Isander Rivera Morales set bond at $175,000, which Lopez posted in being permitted to return home. However, the boxer is placed under house arrest and remains under electronic surveillance pending further hearings.

All of the above charges are classified as fourth-degree felonies, carrying a maximum sentence of three years each. Lopez could face up to 21 years in prison if found guilty on all charges, along with criminal restitution to compensate the victim for any losses suffered as a result of the alleged crimes.

Charges were filed exclusively via a sworn affidavit from the alleged victim. In light of the absence of questioning the victim given the circumstances, lead defense attorney Jaime Barcelo Sosa—representing Lopez—waived the right to questions and/or present evidence in their favor. Lopez remained silent, staring straight ahead during the proceedings.

The story quickly made the rounds after Ojeda took to her personal Instagram page to reveal a series of photos and videos accusing Lopez of repeated physical and emotional abuse. Ojeda alleged the acts of domestic violence were going on for years and often attributed to alcohol abuse.

Lopez was previously charged with similar actions in 2015 with then-partner Geraldine Crespo.  The charges were dropped due to Crespo ultimately refusing to cooperate with authorities who sought to proceed with the case.

However, Ojeda’s decision to come forward prompted a similar accusation from another ex-girlfriend of Lopez. Marangely Lozada cited the boxer’s battles with alcoholism and aggression in citing psychological abuse, though not revealing any incidents of being physically harmed.

Lopez has not fought since May 2019, having formally retired last March at the start of the pandemic. A member of the 2004 Puerto Rico Olympic team that competed in Athens, Lopez boxed pro on and off from 2004-2019, having won WBO titles at junior featherweight and featherweight. The well-schooled southpaw ran his record to 30-0 before running into Orlando Salido, suffering an eighth-round knockout in April 2011.

A rematch with Salido in March 2012 proved just as competitive though with a similar outcome, as Lopez was stopped in the tenth-round of their WBO featherweight title fight in San Juan. In an interview immediately after the fight, Lopez claimed the fight was prematurely stopped due to a vendetta held by Roberto Ramirez Sr. whom the boxer accused of having a gambling problem.

The comments landed Lopez in hot water, being served a one-year suspension though slightly reduced as he returned to the ring in February 2013. His prime years were long gone by that point, with Lopez going 5-4-1 in the final ten fights of his career including a fourth-round stoppage to an overweight Mikey Garcia in a failed bid to regain his WBO featherweight title in their June 2013 clash in Dallas.

Lopez launched a brief comeback in 2018, with designs on pursuing an over-marinated showdown with Miami’s Yuriorkis Gamboa. The two even appeared on the same November 2018 show with the intention of next facing each other, though—naturally—the fight never materialized.

A disappointing eight-round draw with unheralded Emiliano Martin Garcia marked the final fight of Lopez’s career, taking place in May 2019 in his Caguas hometown. The southpaw briefly entered talks with Premier Boxing Champions (PBC), though never advancing beyond preliminary discussion before calling it a career in March 2020.

Lopez is due to next appear in court on September 21 for a preliminary hearing.

Editor’s Letter: It’s likely to be a long road back for Chris Eubank Jnr
The 10 biggest punchers in world boxing
Liam Smith’s Trainer: Truly Believe Chris Underestimated Him; He’s Just A Fantastic Fighter
Nery vs Hovhannisyan eliminator targeted for Feb. 18 in California
Panel: How much interest do you have in seeing a rematch between Liam Smith and Chris Eubank Jnr?