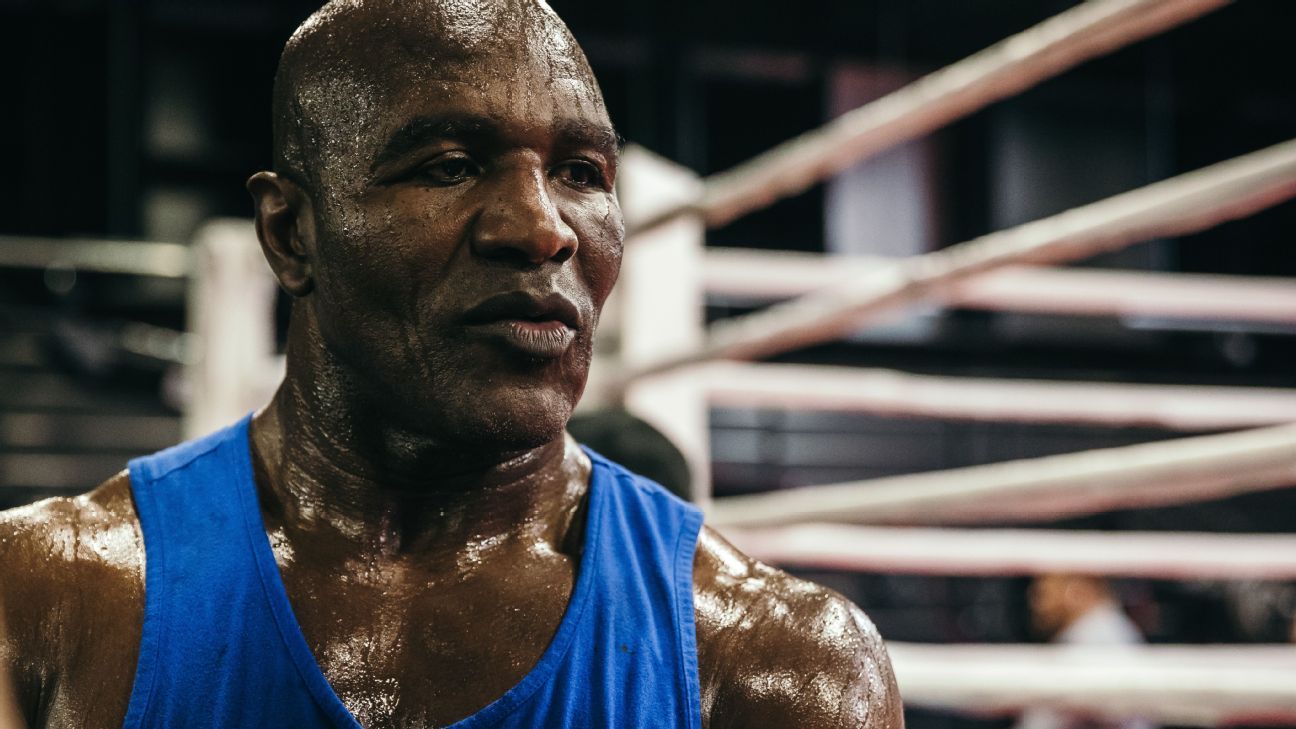 Two fighters who shouldn’t be near a boxing ring are headlining cards in Miami and Tucson, Arizona, this weekend.

Evander Holyfield, 58, returns to the ring to face former UFC champion Vitor Belfort, 44, in an eight-round heavyweight match on Friday at Hard Rock LIVE at Seminole Hard Rock Hotel and Casino in Miami. Holyfield is replacing Oscar De La Hoya, who was scheduled to face Belfort before testing positive for COVID-19 on Sept. 3.

Holyfield (44-10-2, 29 KOs) last fought professionally in 2011 and hasn’t had a competitive fight since unsuccessfully challenging for Nikolai Valuev’s WBA heavyweight belt in 2008. Sources told ESPN the California State Athletic Commission wouldn’t sanction the fight, so the event was moved to Miami. Should Holyfield be allowed to fight? Is he going to get KO’d?

In Arizona, WBC junior lightweight world titlist Oscar Valdez defends his title against Robson Conceicao on Saturday. Valdez tested positive for the banned substance phentermine ahead of this bout but has been allowed to fight by the Pascua Yaqui Tribe Athletic Commission in a ruling on Thursday, Sept. 2. The WBC did not strip Valdez of his title, even after the positive test. Is this situation bigger than just this fight?

Last Saturday, the third fight between Josh Warrington and Mauricio Lara was stopped after two rounds due to an unintentional clash of heads that opened a gruesome cut over Lara’s left eye. Should they fight again? And how about Jake Paul? Is it time for him to fight a “real” boxer, or can he continue to face other YouTubers or MMA fighters and continue to draw an audience?

Real or Not: The Valdez situation is representative of a bigger problem in boxing

Coppinger: Boxing’s system of policing performance-enhancing drugs is broken, plain and simple. The decision to allow Valdez to proceed with his fight after testing positive for a banned substance just destroyed whatever credibility remained of PED testing in boxing.

What happens when the next fighter tests positive for a banned substance? Will he be allowed to fight, too? It’s a slippery slope, and there’s been a ton of misdirection from not just the WBC, but also Top Rank, Valdez and the Pascua Yaqui Tribe Athletic Commission to allow this fight to continue. In ignoring the Voluntary Anti-Doping Association (VADA) guidelines — the very rules Valdez insisted on for his fight with Conceicao — a dangerous precedent has been set.

Why have VADA testing at all? It appears the parties involved simply want the appearance of PED policing rather than actual practice of it. Yes, VADA does not adjudicate but the rules are clear as day: All prohibited substances are banned at all times. Valdez knew this. Top Rank knew this. The WBC, who uses VADA for its Clean Boxing Program, knew this. Instead, we have the powers that be moving the goalposts and insisting Valdez didn’t violate the World Anti-Doping Agency (WADA) rules which don’t ban stimulants out of competition. And we also have another black eye for boxing. This is much bigger than just one fight.

Real or Not: Vitor Belfort will KO 58-year-old Evander Holyfield

Baby: Real. But it won’t be a full knockout. Eventually, this fight will be stopped.

If and when this “fight” actually occurs, maybe those inside the ring will realize what everybody seems to already know. Putting 58-year-old Evander Holyfield inside the ring isn’t just a joke, it’s human malpractice.

Belfort is 14 years younger than the former heavyweight champion who had his last professional bout in 2011 and declared bankruptcy one year later. Aside from the financial circumstances, there is absolutely no reason for Holyfield to take any more punishment.

Here’s a plausible scenario: Belfort realizes Holyfield is in no condition for a fight and pulls his punches. Or, the former UFC superstar decides to whack Holyfield a few times and the referee, perhaps feeling a bit of guilt for what’s happening in front of him, decides to call things off and Belfort records a TKO.

The odds this thing doesn’t go the distance should be fairly high. The bigger uncertainty is the manner of stoppage.

Of course, it should have been stopped already, before the opening bell.

Real or Not: There will be a third fight between Josh Warrington and Mauricio Lara

Parkinson: Real. Warrington still needs to set the record straight. The result of this past fight was not what Warrington hoped for, but after Saturday’s technical draw he needs (and wants) to face Lara again to restore his pride and gain revenge after losing to the Mexican by ninth-round stoppage in February.

Saturday’s rematch was just getting going when Lara was left with a nasty cut above his left eye due to an unintentional clash of heads, which prompted the stoppage at the end of two rounds. Afterward, Warrington — a big crowd-puller in his home city of Leeds — said: “I need to get the slate cleaned.”

Warrington will have to wait to face Lara until early in 2022, due to the cut, and he might take an interim fight in the meantime. But don’t expect it to be a big one.

Warrington said in the days leading up to fighting Lara for a second time, “Kid Galahad got beat by me and all of a sudden he gets to fight in another eliminator again. Why can’t I walk straight into fights with the big names like Gary Russell Jr. or Emanuel Navarrete, pick up where I left off?”

But after Saturday’s frustrating outcome, Warrington is going to have to do more — maybe two wins — to get back into world title contention after that non-event, and he might even reconsider his previous declaration that he is not interested in a rematch with Kid Galahad, his English and Yorkshire rival whom he beat by split decision in June 2019.

Warrington can’t afford any slip-ups, so promoter Eddie Hearn will provide him with a low-risk opponent before going for Lara again. Unless Warrington lands a world title shot next. But the chances of getting Gary Russell Jr. to defend his WBC world title against Warrington before the end of 2021 also seem slim. Navarrete also has a defense planned for next month.

What would be easier for Warrington (and possibly what he is persuaded to do) is face either Galahad or new WBA champion Leigh Wood, who are both from England and promoted by Matchroom. But Warrington seems driven by revenge, rather than glory, right now.

Real or Not: Jake Paul will fight a real boxer next

Rothstein: Not real, for now, anyway. And I say this with the caveat that if you consider Dillon Danis a boxer, maybe that changes.

While Paul is clearly taking boxing seriously and has progressed, he might be one fight away from a boxing-first boxer. I say this because this might be the problem with Paul. It’s tough to market Paul against a complete no-name in boxing because part of the draw and the allure is people know the guy on the other side of the Paul matchup. If he were to fight a real boxer next, the chances of that fighter being a known quantity are … not great. And if it is a fighter who is known, chances are that might be a very bad thing for Paul, who doesn’t have the requisite experience level yet.

The best thing for Paul is to continue to work his way up — find another MMA fighter who would like to step into the ring and get a sweet payday — and then transition to real fighters. It’ll have to happen sometime if Paul keeps doing this, but it just feels a little too soon for that to happen.

The big money fight would be Paul vs. Conor McGregor, but the weight differential could be an issue. And that’s the other rub — so far Paul’s fights haven’t really been against someone in his weight class. I’m interested to see how that would go. So while he probably should fight an actual boxer next, it might still be a little bit too soon in reality.

Real or Not: Anderson Silva will KO Tito Ortiz in their boxing match

Raimondi: Jake Paul beating Tyron Woodley underscores again just how impressive Anderson Silva’s win over Julio Cesar Chavez Jr., a former world champion, in June really was. Chavez Jr., while surely past his prime and dealing with various issues including weight-cutting, is a far more established, legitimate boxer than Paul. MMA fighters have not always looked good in these types of matchups against boxers, but Silva looked really solid against Chavez Jr., turning back the clock a little bit. Silva has only one win in his past nine MMA fights. Paul, meanwhile, outpointed Woodley, the former UFC welterweight champion. Silva is the legendary former UFC middleweight champion, the best ever in that weight division in mixed martial arts.

Ortiz should, on paper, be a step down in competition for Silva after Chavez Jr. Not only is Ortiz a well-past-his-prime MMA fighter just like Silva is, his base in that sport was wrestling — kind of like Woodley. Silva, meanwhile, was long one of the most crafty strikers in the UFC. That’s not to say he’s a sharp, fundamentally sound boxer. But “The Spider” is one of the most creative, talented knockout artists to ever compete in MMA. And I do think he finds the finish here against Ortiz, so I’ll say real to this statement.

I’ll say this for Ortiz, though. Yes, he is 46 years old (the same age as Silva, actually), but he has been traditionally pretty durable. He has not been an easy guy to knock out in MMA. His last time getting stopped via blows to the head came way back in 2006. Ortiz, the UFC Hall of Famer and former longtime UFC light heavyweight champion, lost a couple of times with body shots since then, but his chin has always been pretty solid. However, the difference here is that Ortiz cannot fall back on his bread and butter — wrestling — if he gets in trouble against Silva.

If Silva looks as good (and confident) as he did against Chavez Jr. three months ago, Ortiz is going to have a hard time keeping up with him. Ortiz has never been the best boxer in MMA, though he made some strides toward the end of his run working with Jason Parillo, an excellent striking coach out of Orange County, California.

Ortiz is working with Parillo again for this camp, and that will surely help him. But there’s a lot of ground to make up against Silva. My best guess is Ortiz hangs around for a bit, but Silva pours it on late for a finish. Silva vs. Ortiz is a boxing match between two middle-aged MMA legends. Surely, Silva should win. But who knows? You never can tell exactly what will happen in these fights, which is why people pay to see them.

Oleksandr Usyk To Tyson Fury: “I’m Ready To Box You Even Without Any Prize Money!”
David Stevens Drops Sean Hemphill Twice Late In Final Round, Wins ‘ShoBox’ Main Event By TKO
Easter vs Fortuna FULL FIGHT: January 20, 2018 | PBC on Showtime
Oscar De La Hoya Believes Ryan Garcia – Gervonta Davis Will Be Announced “In The Next Few Days”
‘You only fight him because you have to’: Why nobody wants to get into the ring with light heavyweight champion Artur Beterbiev