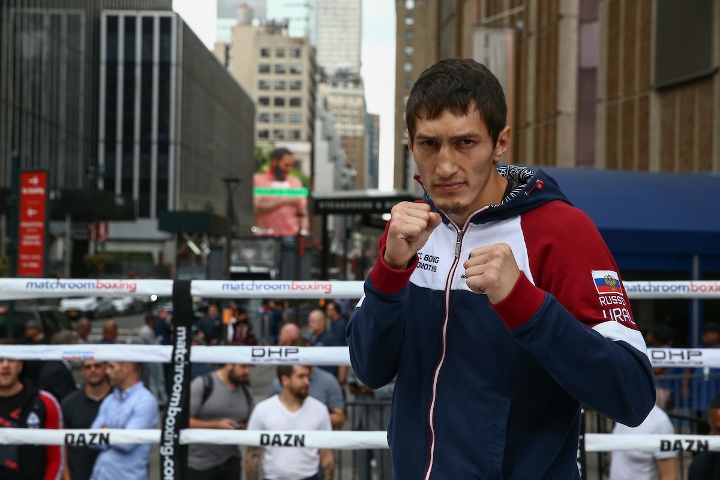 For over twenty years German Titov has been retaining his tight grip on the Russian fight scene, being one of its biggest and most consistent promoters. That grip won’t loosen anytime soon, as German Titov and the RCC Boxing Promotions prepare for their hugest event in 2021, which is set to take place this Saturday night at the RCC Boxing Academy in Ekaterinburg, Russia.

The card will constitute only ten- or twelve-rounders with no less than eight minor title fights in total. The show will feature the best of the RCC Boxing’s roster and some most talented Russian boxing operators. Sadly enough, the entire card will not land at any of the Russian common or sportive TV Channels but will be aired live in YouTube starting at 6 PM LT.

The main event will see a showdown for a vacant World Boxing Council Silver Lightweight title, the only twelve-rounder in the card.

WBC #6 and IBF #9 Zaur Abdullaev (13-1, 8 KOs), 27, will be the favorite but shall show much more grit and mastery than in his ultimate fight against Zhora Hamazaryan, one which he has barely clinched after being decked in the seventh round. The penultimate outing was considerably more successful as he crushed fellow teammate Pavel Malikov (16-1-1) in seven rounds of a horrific beatdown. Abdullaev’s only loss came against rising star Devin Haney in a bid for the WBC Interim title.

Opposing 5’9’’ orthodox Abdullaev is a former holder of the very green belt. Dejan “The Dynamite” Zlaticanin (24-2, 16 KOs), Montenegro’s only major title holder, hasn’t fought for almost two years but is pumped up for the upset. A diminutive (5’4’’) and aging (37 years) boxer will look to impose his will and start a brawl with a taller opponent.

These tactics helped the then-unknown Montenegrin to get the biggest win of his career, when he scored a road split decision against future three-division beltholder Ricky Burns. Two fights after Zlaticanin scored the third-round stoppage of Franklin Mamani to capture a full-fledged WBC lightweight belt. He lost his title the next fight being knocked out in three by comebacking Mikey Garcia. The Montenegrin also owns wins over previously undefeated 18-0 Ivan Redkach and experienced Russian veteran Petr Petrov among others.

Both Evgueny Tischenko and Dmitry Kudryashov, two of the Russia’s finest cruiserweights, both are coming off losses and both have something to prove in this career-defining cross-roader.

IBF #14 Tishchenko, 30, has had an aura of an undeserved beneficial ever since his highly controversial gold medal at the 2016 Rio Olympics, which should have been awarded to his Kazakh opponent Vassiliy Levit according to the eyes and votes of many.

The towering southpaw had been looking solid enough to silence his doubters at the opening stage of his pro career. It has all come to an end on March 27 at the very same place, when Tishchenko (now 8-1, 6 KOs) was soundly decisioned by South African Thabiso Mchunu for the WBC Silver cruiserweight belt.

While Tishchenko aims to get back on track, his 35-years old opponent will try to prove he ain’t yet a spent bullet. The order is tall for once-feared power puncher with solid offensive and very shaky defense. Kudryashov (24-4, 23 KOs) lost one-sidedly to fellow compatriot Evgueny Romanov in the WBC Bridgerweight eliminator in the only loss he hasn’t been stopped in. Kudryashov was also stopped in five by the now-reigning WBC cruiserweight champion Ilunga Makabu. Those losses were sandwiched by a very questionable split decision over unheralded Czech import Vaclav Pejsar in December 2019, which was bad enough for Andrey Ryabinskiy, a promoter of Kudryashov at the time, to cry for a robbery of his protégé’s opponent.

A vacant WBC International cruiserweight title will be up for grabs in this particular fight.

One of the RCC top super featherweight bills Mark “Canelo” Urvanov (19-2-1, 10 KOs), a holder of the WBA Gold 130lb belt, will be featured in the only non-title ten-rounder of the card.

WBA #2 and WBO #6 Urvanov, 25, was previously scheduled to fight in the WBA final eliminator but that fight has fallen through. Instead, the ginger-headed Russian will take on Nigerian import Oto Joseph (17-0, 8 KOs), 28. The latter will fight for the first time outside Africa and just for the second-time outside his native land. He doesn’t look to form a competitive pair with a hard-hitting Russian but being an unknown quantity can work in his favor.

WBO #1, WBC #3 and IBF #14 ranked Yakubov, 26, is an experienced competitor, who has built his career almost exclusively in Ekaterinburg, Russia. He holds victories over a number of imports though, including his teammate Mark Urvanov and former WBC Super flyweight beltholder Tomas Rojas.

The Chilean has last suffered a loss earlier than a kickoff of Yakubov’s career but his 11-0-1 streak was compiled at home. Palma is 0-9 while fighting abroad and that is not about to be changed.

Tatyana “The Black Pather” Zrazhevskaya (11-0, 3 KOs) relocated back to her adopted homeland (Tatyana, 29, is originally from Cholakkorgan, Kazakhstan) after several fights in Germany to capture an interim version of the WBC bantamweight title in March of 2021.

She aims to defend her belt for the very first time against Mexico’s Jessica “La Magnifica” Gonzalez (7-5-1, 1 KO).

Gonzalez is a dark horse, who hasn’t fought for almost three years and rides a counter-impressive streak of four losses and a draw in her last five fights. Yet the only time she was decisively defeated was her one-sided UD 10 loss to Britain’s Chantelle Cameron at the lightweight limit. During the streak she also dropped decisions (a technical one and a split one) to Hyun Mi Choi and Liliana Palmera in her two world title challenges. She also holds wins over 7-0-1 Irma Garcia and 28-7-1 Yazmin Rivas.

Two fighters with an Indian connection, will collide for a vacant WBO Oriental super middleweight title. Hard-hitting Russian national champion Oleg Misiura (7-0, 6 KOs), 29, started his pro career in January 2017 in Bhopal, India. He is coming off a breakthrough victory over 10-1-2 Batal Chezhia in his latest fight.

Meanwhile, Misiura’s opponent Artysh Lopsan of Kyzyl, Tyva, is coming off his biggest win too. In March 2021, Lopsan, 26, clashed against Indian national pride Vijender Singh (12-0) and stopped him in six rounds. He is now 5-1-1, 3 KOs.

Vladikavkaz own Dmitry Khasiev (11-2-2, 5 KOs) looks out to continue his improbable streak of stoppage against a very tough opponent in rugged Gaibatulla Gadzhialiev (8-2-1, 3 KOs). A vacant WBO Oriental 130lb title will be stake in a weight division, filled with the RCC-promoted fighters.

Southpaw Khasiev, 26, who was stopped in two by 2020 Tokyo Olympian Elnur Abduraimov two and a half years ago, has consecutively stopped two unbeaten boxers in Nikita Kuznetsov and Stanislav Kalitskiy and then repeated a trick versus once-defeated teammate Vladislav Krasnoshein.

Experienced journeyman Gadzhialiev, 30, is best known for his losses rather than for his winning encounters. Gaib Gadzhi was on a losing end of two narrow decisions against capable 15-1-1 Georgy Chelokhsaev and 14-1-1 Pavel Malikov and managed to get a draw against former perennial lightweight contender and three-time IBF 135lb title challenger Denis Shafikov in February 2019.

WBO #9 super featherweight Ruslan Kamilov (10-0-1, 5 KOs) has a habit of fighting his own teammates in intrinsic cross-roaders. The next of the kind will be his clash against Kazakhstan’s native Stanislav Kalitskiy (11-1, 4 KOs), who himself is an expert of fighting members of the RCC boxing team. The fight is scheduled for ten, and Kamilov’s WBO Intercontinental 130lb belt will be at risk for the second time in 2021.

Kamilov, 33, is on an impressive streak of three solid wins. He knocked out previously undefeated Russian Evgueny Smirnov in two in December 2019 to avenge a draw earlier that year, then scored a dominant decision over Nikita Kuznetsov and, finally, stopped teammate and former WBO title challenger Evgueny Chuprakov in March 2021.

Kalitskiy, 24, is coming off a firefight with tough-as-nails former fringe contender Pavel Malikov. On March 27, Kalitskiy found himself on the ground twice in the first two rounds and was trailing badly on all the judges’ scorecards, before rallying big to knock Malikov out in the fifth. He has previously lost on stoppage to another teammate Dmitry Khasiev and dealt the first career loss to the third one in Vladislav Krasnoshein.

In the opener, two undefeated southpaw fighters will be pit against each other for two WBO minor titles at the 122lbs. WBO #11 super bantam Muhammad Shekhov, 29 and originally from Bukhara, Uzbekistan, will risk his WBO European title versus presently undefeated Tajik import Asror Vokhidov (9-0, 5 KOs), 25, a holder of the WBO Oriental belt in the very same weight class.

WBO #14 Vokhidov’s biggest win was a unanimous decision over 11-1-1 Yerzhan Zalilov in March 2020. He stopped Thato Bonokoane of the South Africa in his last fight in January 2021. Shekhov’s latest win was a split decision over Evgueny Lyahkov this May. Shekhov (9-0-1, 3 KOs) suffered the only (partial) setback in his career a year ago, when he managed to get just a draw against 6-0 Magomed Kurbanov, a namesake of the world-rated light middleweight from the very same team.