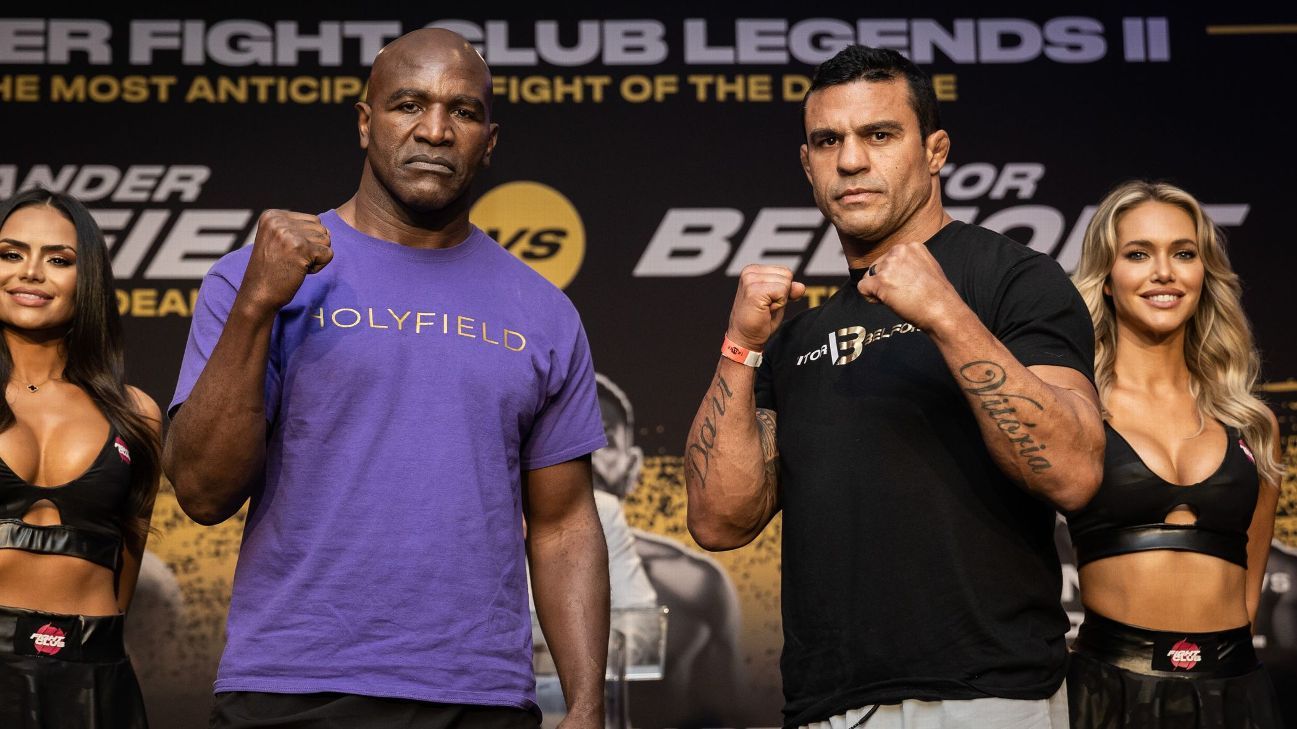 Yes, Holyfield is 58. And yes, this will be his first fight since he defeated Brian Nielsen in 2011, capping one of the greatest in-ring careers of all time. Holyfield won Olympic gold at the 1984 Games as a light heavyweight before he became the greatest cruiserweight champion in boxing history.

“Real Deal” is best remembered, of course, for his legendary run at heavyweight, a resume that includes two wins over Mike Tyson (including the infamous “Bite Fight”), a win over George Foreman and one win over Riddick Bowe in one of the most brutal title trilogies of all time.

De La Hoya-Belfort was set to take place at Staples Center in Los Angeles. However, Holyfield-Belfort will be staged at the Hard Rock in Hollywood, Florida — a Triller Fight Club pay-per-view — after the California State Athletic Commission refused to license the 58-year-old. The pay-per-view begins at 8 p.m. ET.

Will Holyfield-Belfort be a real, sanctioned fight with an official winner or an exhibition?

In this new world of novelty boxing matches that’s Wild Wild West even by boxing standards, there’s a lot of confusion when it comes to these matters. When you examine this particular event, the confusion is even greater.

A Florida Athletic Commission spokesman told ESPN the commission “stands prepared to regulate the Evander Holyfield-Vitor Belfort bout as a sanctioned fight that would appear on both fighters’ official boxing record. Ultimately in this case, the decision on whether Saturday’s fight is a sanctioned match or an exhibition match is a matter for the participants. Regardless, the Commission will be supervising the fight.”

If Triller, along with the fighters, decide the event won’t be registered as an official bout that is listed on BoxRec (boxing’s official record keeper), the promoter has until right before the bell rings to notify the commission, per the FAC.

However, it’s not a foregone conclusion this will be an official bout. Sources told ESPN Holyfield has expressed apprehension about the fight counting toward his official record.

“We have approved this as a full pro bout,” the commission said. “If Triller and the fighters elect to not have this go on BoxRec, we will honor that request, but pro boxing rules will still apply with judges, scoring and a clear winner just as if it were a pro bout.”

“If Holyfield doesn’t want this to go on his BoxRec due to his age, we’ll allow him to make the decision and still follow all the other rules,” Triller co-founder Ryan Kavanaugh told ESPN. “As of now the fighters are comfortable with how it stands and we’re going to revisit this over the next couple of days to decide.

“We’ve spoken to Holyfield and Vitor and the commission; no matter what, this will be scored as a pro flight, there will be a clear winner and it will be treated with pro rules.”

When Floyd Mayweather-Logan Paul met in an exhibition match in June, a fight supervised by the FAC, there was no official winner and no judges. Both fighters also weren’t supposed to push for a knockout. Mayweather’s weight limit was 160 pounds; Paul’s was 190.

Holyfield and Belfort will compete at heavyweight, the unlimited weight class. Belfort was slated to fight De La Hoya at a catchweight of 190 pounds, so now he doesn’t have to worry about cutting weight.

What is the process to get licensed to fight in Florida?

California, which has more stringent regulations, declined to license Holyfield to fight, whether it was in an exhibition or an official fight. Florida, on the other hand, saw no issue.

“All boxers on this card have successfully met all requirements to be licensed by the Florida Athletic Commission,” a spokesperson for the commission said.

All fighters over the age of 40 who apply for a license in Florida are subject to an eye exam, blood work, an MRI and EKG, per the commission.

Regardless of age, every fighter requires an ophthalmic exam within the last 12 months and a physical exam. It remains to be seen how safe it is for a 58-year-old to compete.

On the boxer severity index, created by former Nevada commission chief executive director Dr. Flip Homansky — and utilized by the Association of Boxing Commissions — Holyfield registers a plus-4. Plus-3 to plus-4 is considered High Risk Category “C.” Category “A” (+7-+9) and “B” (+5-+6) are for fighters who are considered to be an even greater risk.

According to the index, any fighter who falls in one of those three categories needs further clinical evaluation by the commission and their medical advisory board before licensure. Given the FAC’s decision, Holyfield has completed this evaluation.

Why is Holyfield fighting?

Earlier this year, Holyfield signed a deal with Triller to meet Kevin McBride in an exhibition bout on June 5 on the undercard of Teofimo Lopez-George Kambosos.

The event never happened, leading to a contractual dispute between Holyfield and Triller. Then De La Hoya contracted COVID just days before his fight with Belfort, opening the door for Holyfield to step in, solving two issues at once.

But why fight at all if you’re Holyfield? For one, he’s making multiple millions, sources told ESPN. More so, he’s still chasing a lucrative third fight with Tyson. “Iron” Mike’s November exhibition with Roy Jones Jr. — a Triller event — was a massive success.

“This is the first time my kids ever told me… ‘Dad, you don’t need to be getting hit,'” Holyfield said.

So what does Holyfield say to those who say he shouldn’t be fighting at 58?

“You are absolutely right,” Holyfield said. “At least I’m fighting somebody that I know I can protect myself [against]. The whole thing’s about protection. You don’t become a good fighter until you know how not to get hit…. I know all the things that’s necessary to be safe.”

“It’s kind of hard to turn down a big sum of something when you know you can do it. Plus you gotta understand, they saying fight somebody who boxing ain’t his thing.”

Indeed, Belfort is a 44-year-old who has had only one pro boxing match. And that was in 2006, a first-round KO victory in his native Brazil. Belfort hasn’t fought since May 2018, a second-round KO loss to Lyoto Machida at UFC 224. That was Belfort’s fourth loss in six Octagon appearances. He announced his retirement after the bout.

Is he the oldest boxer to partake in an official bout?

Even if this bout proceeds as an official fight, Holyfield — one month shy of his 59th birthday — won’t be the oldest boxer to partake in a professional fight.

That distinction belongs to Steve Ward, whose final fight came months before his 60th birthday. The Englishman ended his career with seven consecutive losses, his last fight coming in December 2015. His record: 15-40-3, 1 KO.

Ward never competed anywhere near the top level, but there is Jack Johnson, the all-time great who became the first Black heavyweight champion in 1908. He finished his career at 53 years old with five losses in his final seven bouts.

Who else is on the card?

UFC legends Anderson Silva and Tito Ortiz meet in a professional boxing match in the co-feature. Silva upset Julio Cesar Chavez Jr. this summer in Mexico, and now fights Ortiz, who will be making his boxing debut.

Also on the card is former heavyweight (and cruiserweight) champion David Haye who is coming out of retirement to meet Joe Fournier in a sanctioned fight. When they were set to fight in Los Angeles on the same date, the fight was an exhibition. Fournier, a part-time boxer, scored a knockout of musical artist Reykon in April on the Jake Paul-Ben Askren undercard.

The opening bout of the pay-per-view bout is the lone fight that features two world-class boxers: a 130-pound fight between fringe contenders Andy Vences and Jono Carroll.