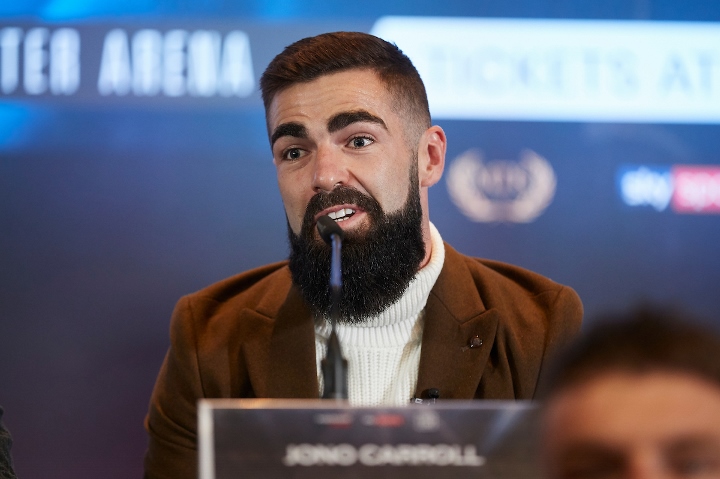 The stakes for his upcoming fight mean little to Jono Carroll, who knows he can’t afford another loss.

Ireland’s Carroll (19-2-1, 5KOs) is set to meet San Jose, California’s Andy Vences (23-2-1, 12KOs) in a junior lightweight crossroads bout this Saturday, three months after they were previously due to collide June 19. The platform remains the same, with the bout airing live on a Triller Fight Club Pay-Per-View show live from Seminole Hard Rock Hotel & Casino in Hollywood, Florida.

Recent industry developments no longer call for the contest to serve as a title eliminator, though that part is the least of Carroll’s worries.

“Every single fight now is an eliminator for me,” Carroll told BoxingScene.com. “I’ve had ups and downs. I beat Scott Quigg which left me [poised] to challenge for a world title and then was asked if I wanted to take a fight just to stay active. So, I decided to step in, fighting outside my weight.”

That fight came against Maxi Hughes, which took place above the lightweight limit last August behind closed doors at Production Park Studios in South Kirkby, England. Carroll landed on the wrong end of what was deemed a stunning upset at the time.

“I wasn’t fully focused, it was a silly decision,” admits Carroll. “After beating Scott Quigg, I was right there for a title eliminator. I stopped Scott Quigg, something Oscar Valdez couldn’t even do.

Then I went out and took that silly loss. It was a fight I never should have taken but I learned a lot from it.”

Hughes (24-5-2, 5KOs) turned the feat into the hottest stretch of his career, having won five straight including a twelve-round decision over Jovanni Straffon one week ago in a masterclass performance.

Carroll has fought just once since that night, scoring a fourth-round stoppage of unbeaten Romic Airapetean this past March in Malaga, Spain. The bout was means to return to the win column before entering his planned WBA title eliminator versus Vences, due to take place June 19 in Miami. The show was canceled once lineal lightweight champion Teofimo Lopez tested positive for Covid, killing his IBF mandatory title defense versus George Kambosos Jr. along with the entire card.

Carroll remained optimistic and focused, training in Monterrey, Mexico while awaiting a new date. It comes this Saturday, in supporting capacity to a show with a new main event and location. Original plans called for Hall of Fame former six-division titlist Oscar De La Hoya to face former UFC light heavyweight champion Vitor Belfort atop this weekend’s PPV to have aired from Staples Center in Los Angeles.

The entire show went on the move once De La Hoya tested positive for Covid and was replaced by long-retired Hall of Fame former cruiserweight and heavyweight champion Evander Holyfield, who was not cleared by the California State Athletic Commission. The event moved to South Florida, which was met with mixed reaction by many though a sigh of relief of the undercard participants.

“Last time, I put in a full camp for a fight that was canceled with four days to go,” notes Carroll. “I’m just glad to have something to show for it this time around.”

What he plans to show, is that he still belongs on the title stage. The 29-year-old Dubliner is more than two years removed from a competitive defeat to then-IBF junior lightweight titlist Tevin Farmer. The loss to Hughes was a considerable setback, though with time to still make things right.

“I’m not in the sport just to fight,” states Carroll. “If I can’t get to a world title, then farewell. I don’t love the sport to stay in it just for the sake of staying in it.

“Every fight for me now is with the intention of fighting for a world title next.”

Sources: Ortiz-Stanionis bout set for April 29
Predictions: Artur Beterbiev vs Anthony Yarde
Ramirez vs Dogboe interim title fight official for Apr. 1 in Tulsa
De La Hoya Eager To Sign Edgar Berlanga To Golden Boy: ‘Come Talk To Us, Or We’ll Fly To You’
Panel: What do you expect to happen when Artur Beterbiev and Anthony Yarde meet tonight?