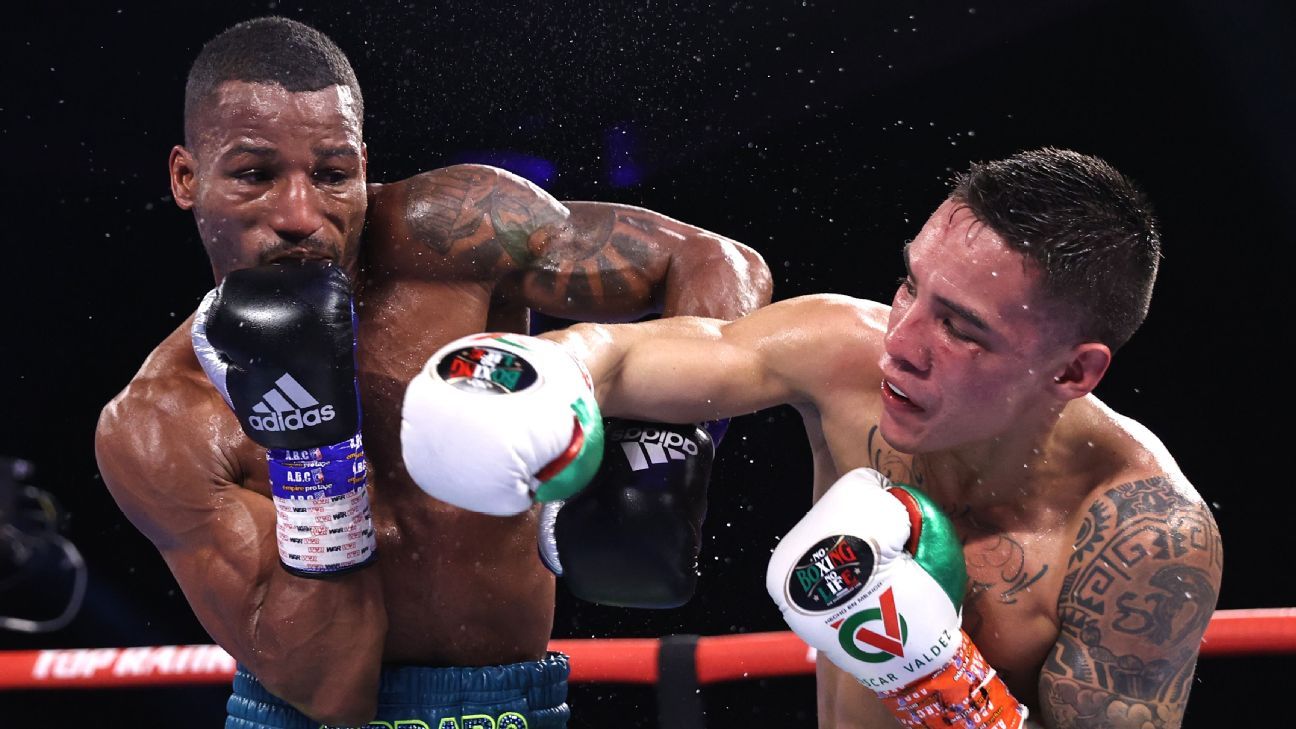 Oscar Valdez dealt with a storm of controversy after the banned substance phentermine was found in his system. He was called a cheater by his fellow fighters.

He drew the ire of fans who were angered that he was allowed to proceed with Friday night’s fight despite the Voluntary Anti-Doping Association violation. And there was also the dark cloud of the WBC, which allowed him to keep his title.

When it came time for the fight itself, Valdez rallied down the stretch after a slow start and defeated Robson Conceicao via unanimous decision to retain his 130-pound title Friday in his adopted hometown of Tucson, Arizona.

Valdez (30-0, 23 KOs) is now looking ahead to the Oct. 23 title fight in Atlanta, but he barely escaped with his belt against Conceicao. The Mexican fighter’s face was badly disfigured, with cuts, bruises and swelling covering him.

The two-time Olympian, who lost to Conceicao in the amateurs, claimed his opponent was “running,” yet the Brazilian outlanded him, both in total connects and power punches (141 to 83 and 103 to 64, respectively).

“In my mind, I won the fight,” Conceicao said through his manager, Sergio Bartelli. “The whole world witnessed my win. … I won this fight.”

Conceicao (16-1, 8 KOs) dished out a lot of punishment, particularly over the first five rounds, which he appeared to sweep. Curiously, only one judge gave him all five of those rounds; he won just two of those rounds on one scorecard and three on another.

During the first five rounds, Conceicao, 32, was in total control behind a stiff jab and straight right hand that landed from range. Valdez had no answers.

Then he turned it up in Round 6, applying more pressure and displaying the kind of aggression that once made him a fan favorite. Valdez was able to find Conceicao’s body as the challenger faded down the stretch. He was no longer able to keep Valdez at bay with his jab.

In Round 9, the referee questionably deducted one point from Conceicao for hitting behind the head; it appeared to be little more than a slight tap. Later on in the bout, Valdez connected on a stiff rabbit punch yet was simply warned.

The officiating decision (and 117-110 scorecard) highlighted the stacked deck against Conceicao on the part of not just the Pascua Yaqui Tribe Athletic Commission but the WBC and, perhaps, even his own promoter, Top Rank. Such is the life of the unheralded B-side fighter.

After all, it was Valdez who entered the fight a known quantity, fresh off a lucrative contract extension with Top Rank. A champion at 126 pounds, Valdez won a title at 130 pounds in February with a one-punch, highlight-reel KO of Miguel Berchelt.

When ESPN broke the news of Valdez’s adverse finding for a performance-enhancing drug in the VADA test on Aug. 31, Conceicao and his manager were unaware despite the return of the A-sample positive result on Aug. 28. The B-sample result — also positive for the central-nervous stimulant phentermine — was returned on Sept. 2.

The WBC and the commission argued that WADA guidelines state that phentermine is banned only in competition, a period that begins at 11:59 p.m. the day before the fight. Yet, VADA, the more stringent testing Valdez insisted on — and the agency Top Rank uses for many of its title fights — makes no distinction between in competition and out of competition. All substances on its prohibited list are banned at all times. The WBC also utilizes VADA for its Clean Boxing Program.

The fight was staged as planned, and now Conceiao’s challenge has been turned back. Valdez never accepted responsibility, blaming the appearance of phentermine on the herbal tea he consumed.

And now he moves on to the next fight, which could come against the winner of Herring-Stevenson. If and when that bout rolls around for Valdez, there’s no guarantee the PED controversy will be behind him.