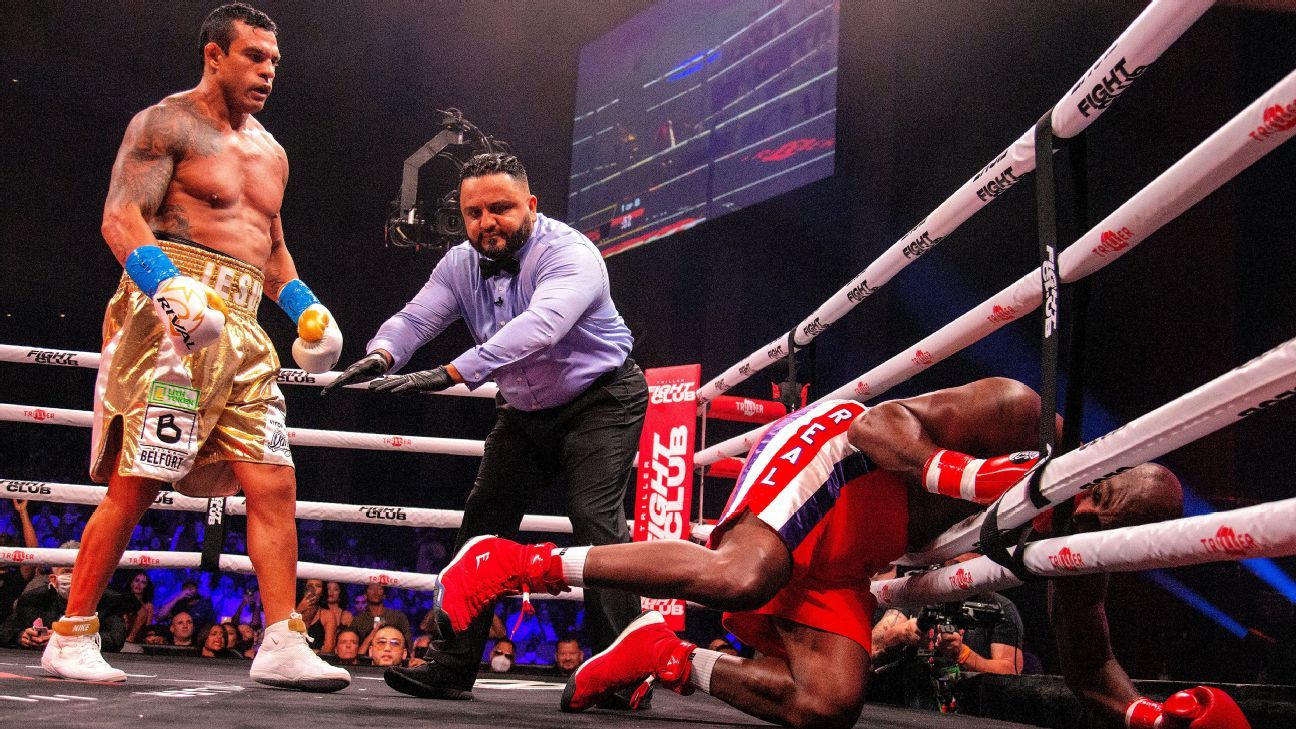 HOLLYWOOD, Fla. — Evander Holyfield, months shy of his 59th birthday, was stopped on his feet by former UFC champion Vitor Belfort in the opening round on Saturday night at the Hard Rock Hotel & Casino.

Belfort, 44, swarmed Holyfield from the opening bell and never let up in the Triller Fight Club main event, as former President Donald Trump watched on from the commentary booth. Holyfield, the former heavyweight champion and one of boxing’s all-time greats, showed no resistance in his first fight since 2011.

A flurry of punches sent Holyfield to the canvas, and after he beat the count, Belfort let his hands go until the ref wisely stopped the fight, saving Holyfield from further punishment.

Belfort, who was boxing for just the second time after an illustrious MMA career, took the opportunity to set up what he hopes is his next fight.

“Hey, Jake Paul, stop running from me,” Belfort said, referring to the YouTube-star-turned-boxer. “You can be my son. I’m going to put you in my lap. You’re going to sleep like a baby.”

Triller moved the entire event to the other coast, where it found a far more forgiving commission. Triller already had an obligation to Holyfield after signing him to a deal earlier this year in hopes it could match him with Mike Tyson in a follow-up to the massive commercial success of the Tyson-Roy Jones Jr., exhibition in November.

Tyson and Holyfield fought twice, in 1996 and 1997, in two of the biggest fights of all time. In the first bout, Ring Magazine’s 1996 fight of the year, Holyfield upset Tyson with an 11th-round TKO. The rematch, of course, was the infamous “Bite Fight.”

Holyfield was set to meet Kevin McBride in an exhibition in June, but the bout never materialized. Instead, he fought Belfort, a far more formidable foe.

“This is the first time my kids ever told me … ‘Dad, you don’t need to be getting hit,'” Holyfield told ESPN on Wednesday. “At least I’m fighting somebody that I know I can protect myself [against]. The whole thing’s about protection. You don’t become a good fighter until you know how not to get hit. … I know all the things that’s necessary to be safe.”

Holyfield couldn’t protect himself Saturday night — at all. He is 58 after all. At his best, he was one of the most ferocious fighters the sport has ever seen, a Hall of Fame boxer beloved for his never-say-die attitude and gritty action fights.

His three fights with Riddick Bowe made up one of the most memorable trilogies of all time. His victory over an aging George Foreman was one of the first major pay-per-view events. But that was a long time ago.

“It’s kind of hard to turn down a big sum of something when you know you can do it,” Holyfield said Wednesday. “Plus you gotta understand, they saying fight somebody who boxing ain’t his thing.”

Belfort had only one pro boxing match before this, and that was in 2006, a first-round knockout victory in his native Brazil. It’s hard to say if Belfort has any boxing ability, because he never really had a chance to show it on this night. He didn’t need to.

Saturday night marked Belfort’s first action since May 2018, a second-round knockout loss to Lyoto Machida at UFC 224. That was Belfort’s fourth loss in six Octagon appearances. He announced his retirement after the bout.

HIs MMA career might be over, but there’s surely more money to be made in boxing, a sport that’s embracing novelty events like these at the moment.