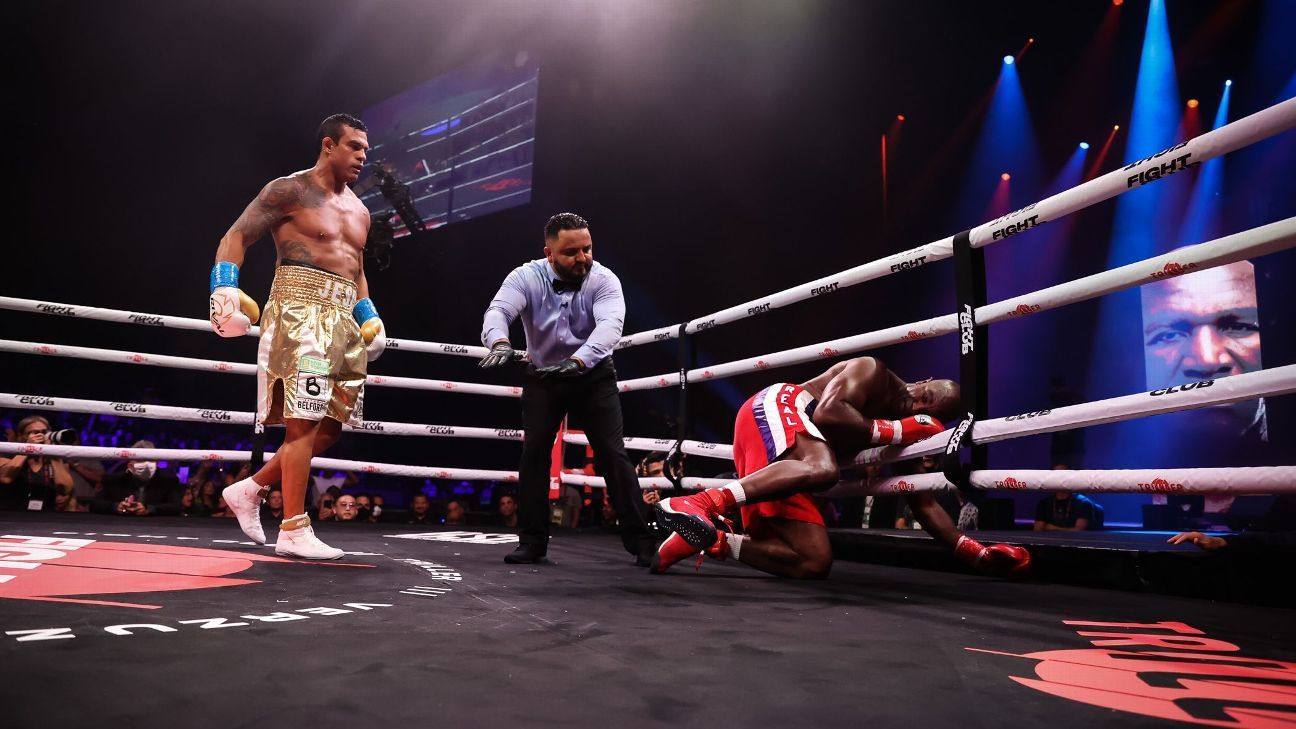 This new genre of novelty boxing matches — fights between celebrities, legends and social-media influencers — has been one of the most popular things in combat sports over the last year. Mike Tyson and Ron Jones Jr. set the stage last November, and the trend has continued to gain momentum since then. Despite some big fights between some of the best fighters in the sport, the Floyd Mayweather vs. Logan Paul exhibition is the biggest boxing pay-per-view event of 2021 so far. Jake Paul vs. Tyron Woodley last month could end up being second.

But if people are going to continue plunking down their hard-earned money to buy these shows, there needs to be an adequate payoff. That was missing Saturday night with the unfortunate bout and finish between Vitor Belfort and Evander Holyfield match under the Triller Fight Club banner in Hollywood, Florida. Belfort earned a first-round TKO victory over Holyfield in a fight where Holyfield landed only one punch.

Simply, and with all due respect to a legendary boxer, the 58-year-old Holyfield should not have been in the ring Saturday night. He came in on just a week’s notice after Belfort’s original opponent, Oscar De La Hoya, was hospitalized with COVID-19. The fight was originally scheduled to happen in Los Angeles, but the California State Athletic Commission (CSAC) would not approve Belfort vs. Holyfield, so the entire event got moved to Florida and a more amenable commission.

“I was not agreeable with the match based on a variety of regulatory factors and we did not have adequate time for [Holyfield] to go through an extensive licensing process,” CSAC executive officer Andy Foster said.

De La Hoya vs. Belfort was on the borderline of combat sports regulation. The two men were in the same age range — De La Hoya is 48 and Belfort 44 — and De La Hoya was a phenomenal boxer before his retirement in 2008. Belfort is an MMA fighter who is tied for the most knockouts in UFC history, but doesn’t have any recent experience in the squared circle. The one thing anyone who has followed Belfort’s career knows about him is that he has hand speed and pop in his punches.

But Holyfield? Sure, he looked shredded from a pure appearance perspective, especially for his age. But that’s where the positive optics ended. The buzz this week in South Florida was less about the fight and more about Holyfield struggling in interviews and looking like a shell of his former incredible self in a public workout.

Holyfield was not sandbagging in that workout, and what many people thought would happen Saturday night did indeed happen.

Early in the first round, the only boxer in the three-belt era to become an undisputed champion in two divisions slipped on a left hook attempt and fell along the apron, between the bottom two ropes. It was difficult to watch. Belfort followed with a couple of punching flurries, scoring a knockdown.

Holyfield got up, but was doing little more than eating punches (some on his gloves). Referee Samuel Burgos mercifully stepped in. Holyfield argued that it was an early stoppage when most watching probably thought it should have been over sooner.

Holyfield seemed fine after the fight during an interview with the broadcast team, but on a negative note, he said he wants to fight again, and he’s still interested in a rematch with Mike Tyson.

At some point, someone needs to step in and advise against it. No one wants to tell a grown man he cannot make a living, but boxing is not a game. There are real, lasting ramifications, and everyone involved is lucky Belfort vs. Holyfield did not end up worse. That might not be the case next time.

Belfort called out Jake Paul in his postfight interview, with Triller putting up a winner-take-all prize of $30 million. UFC all-time great Anderson Silva likely has a big payday awaiting him following his devastating knockout of fellow MMA legend Tito Ortiz on the undercard.

That’s all well and good. There is nothing wrong with fighters getting paid to compete against opponents of a similar skill level and size. As long as people are willing to pay for them, these events will continue on. But there’s just no good reason for a nearly 60-year-old man to be taking punches to the head from a younger, faster, more explosive opponent.

Everyone involved — commissions, promoters, coaches and the fighters themselves — need to exercise discretion as we move forward, because combat sports as we know it could be hanging in the balance.

All that needs to happen is for one fighter to get seriously injured — or worse — in one of these novelty matchups, and the consequences could lead to the entirety of combat sports facing a reckoning.

Oleksandr Usyk To Tyson Fury: “I’m Ready To Box You Even Without Any Prize Money!”
Frank Warren: Beterbiev Is A Monster, But Our Guy (Yarde) Is, Too; If He Catches You, You Go
Rocha Knocks Out Ahsie In Seventh
The Beltline: Just as boxers must do better, we must know not to expect perfection
Tyson Fury BLASTS fighters for DUCKING Demetrius Andrade! | #shorts