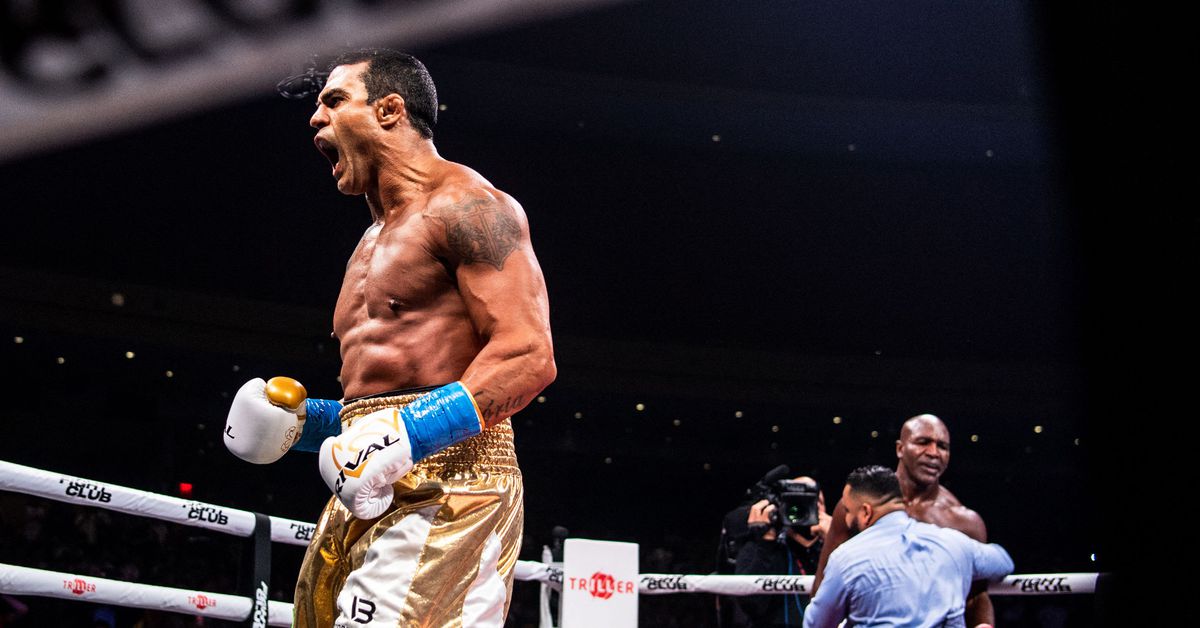 In one of the saddest, most disgraceful displays of pessimistic nonsense the sport of boxing, which is largely built on pessimistic nonsense, will ever see, Vitor Belfort stopped 58-year-old Evander Holyfield in the first round of tonight’s Triller Fight Club main event.

The fight was technically an exhibition in that it’s not going to count on official records, or so it seems. But this also wasn’t like Mike Tyson-Roy Jones Jr last year, which was clearly fought in a sparring fashion, or the same for tonight’s earlier Haye-Fournier showcase.

These two were in there fighting, and it was ugly. Holyfield, who subbed in late for Oscar De La Hoya, was unbelievably slow, had no reaction time left, and couldn’t avoid the 44-year-old Belfort’s hands. Holyfield fell down missing a punch, then shortly after was dropped on a left hand from the Brazilian.

The referee stepped in when the old man took a few more shots, which Holyfield didn’t like, but it was the right call, as Holyfield is 58 years old and nobody wants to see something tragic.

“The guy’s strong. I wasn’t hurt,” Holyfield said after the fight. “There wasn’t no shot that really hurt me real bad. He was strong and he hit me with a shot and I fell down. It’s kinda sad. It is what it is. I think it was a bad call. I think the referee shouldn’t stop the fight that quick. The guy pushed me, the guy was strong and all that.”

Holyfield was asked if Belfort has a future in boxing — which seems unlikely because Belfort is 44 years old so it’s a pretty stupid question, but then this was a very stupid broadcast where everyone made themselves pretend to be dumber than they are — and Holyfield stopped short of saying much about it.

“He might. The fact of the matter, you know, he, you know, you know — me not being able to bounce back like I used to and move around, I let him get too close,” Holyfield said.

“100 percent. I want to thank Holyfield for stepping up. But I came to knock people out,” Belfort said. “We’ve got a list of opponents. Get ready, boxers, you’ve got to come to my world.”

Then they did a publicity stunt where Belfort called out Jake Paul for a $30 million, winner-take-all fight with Triller. It’s well known that Paul has a contract with Showtime, and it’s well-known that “winner take all” challenges are bullshit because this is a business with real life people, not a movie for children.

“We’ve got $30 million, the winner takes all! Jake Paul, stop running from me, man. You’re gonna be my kid. You’re gonna meet daddy over here at Triller. Stop running! You’re a little bitch!”

Vitor was also asked about a challenge to Canelo Alvarez.

Yes, Canelo Alvarez probably won’t fight a 44-year-old MMA fighter at 185 lbs — Canelo fights at 168 — because he makes his own money and doesn’t need to do stunt novelty fights.

All in all, a banner night for boxing.