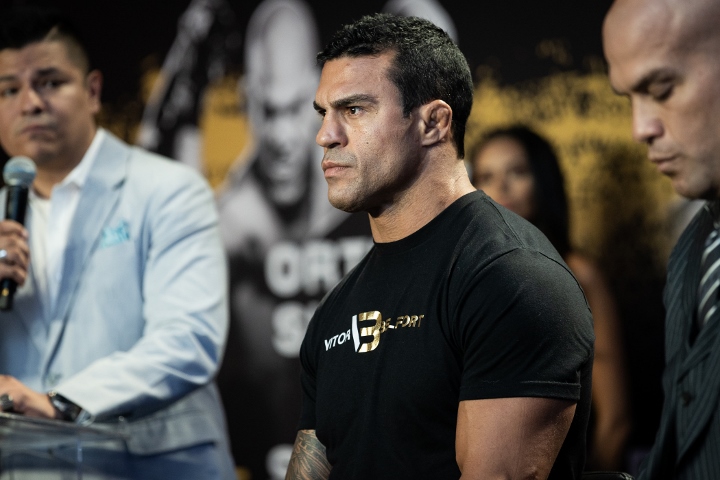 Trump was ringside as a special commenter for the pay-per-view event being staged by Triller at the Seminole Hard Rock Hotel & Casino in Hollywood, Florida.

Belfort, 44-years-old, dropped Holyfield with an uppercut and then finished the fight after unleashing a barrage of punches, as Holyfield was just covering up and not punching back – prompting the referee to step in and wave off the bout.

The bout drew an enormous amount of controversy, because Holyfield – a former undisputed cruiserweight and heavyweight champion – is 58-years-old. And besides his age, Holyfield had been inactive for over a decade.

Given Holyfield’s age and level of inactivity, the outcome was not surprising to many observers – with Belfort being 44-years-old and possessing power in both hands.

Trump, however, was in awe of Belfort’s win.

“You are some fighter. I have to tell you, you have a couple of friends between Jorge and Junior, and my son, my ‘junior,’ they said you’re going to do fantastically well…I said, ‘Well, but boxing’s not his thing.’ Junior said, ‘Yes it is, you just watch,’” Trump said.

“Vitor, your stock was very high, but it’s even higher tonight because you beat somebody who is, I don’t know, I think probably one of the greatest of all time. There’s no question about Evander and we love Evander. I know Evander, and I’ve never seen that happen to Evander. I’ve been with Evander a long time and it’s just one of those things, you were really fantastic.”

De La Hoya ‘One Hundred Percent Certain’ On Delivering Davis-Garcia
Why we might have to wait until 2024 to see Artur Beterbiev vs. Dmitry Bivol in a must-see matchup
Jake Paul Exclusive 😤 Arrogant Tommy Fury Will Be Over ‘In Three Rounds or Less’
Ring Masters Championships: The Road To The Garden 2023
Panel: Who should Artur Beterbiev and Anthony Yarde fight next?