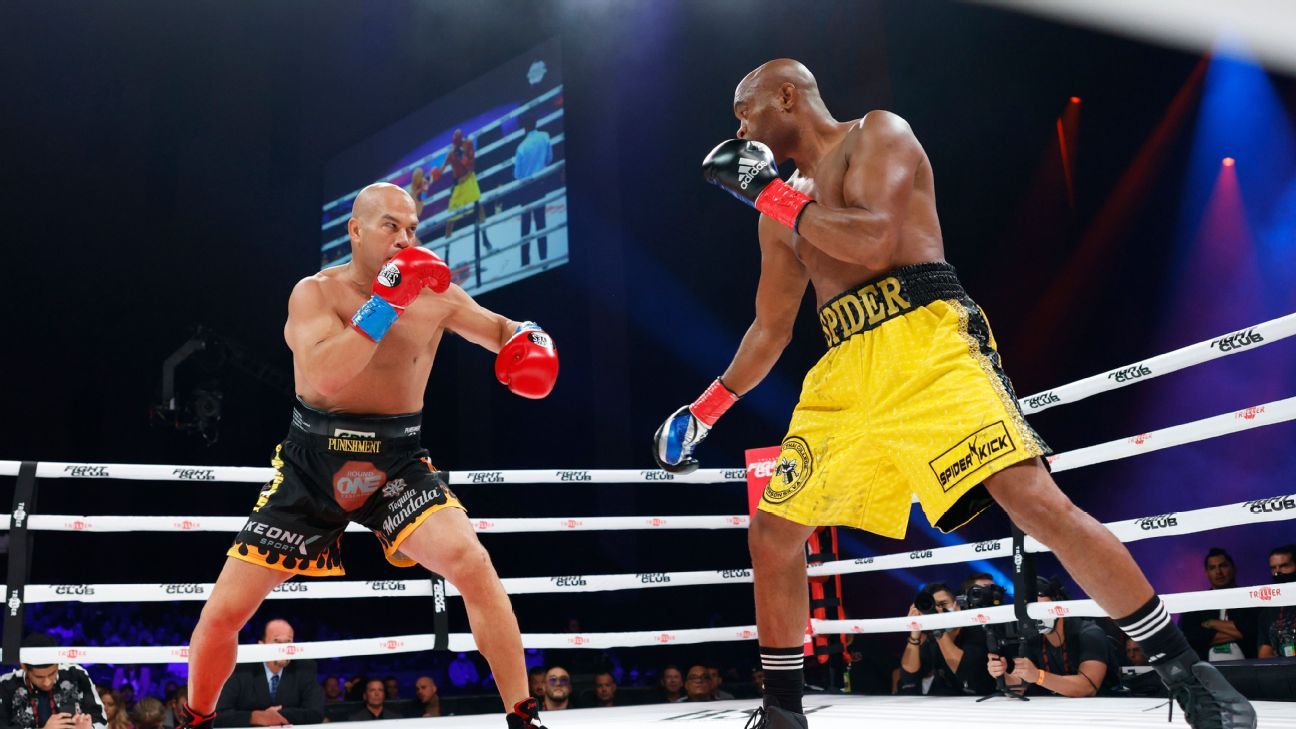 Anderson Silva is closer to 50 years old than he is 40. But the UFC great, somehow, is currently embarking on a relatively successful boxing run.

Silva stopped fellow MMA legend Tito Ortiz via knockout at 1:21 of the first round Saturday night in Hollywood, Florida. Ortiz had Silva trapped in the corner, throwing punches. But Silva ducked an Ortiz shot and landed a huge counter right hook. Silva followed up with a left as Ortiz slumped against the corner to put him down for good. Ortiz appeared to be completely unconscious.

Silva defeated former world champion Julio Cesar Chavez Jr. via split decision June 12 in Guadalajara, Mexico. It was his first pro boxing match in 16 years. This was Ortiz’s pro boxing debut. Silva vs. Ortiz took place on the undercard of the Vitor Belfort vs. Evander Holyfield boxing match under the Triller Fight Club banner at the Seminole Hard Rock.

“I trained hard to show my respect for boxing,” Silva said in his postfight interview. “I continue to work every day to prove my respect for the martial arts and for Wing Chun and for Bruce Lee.

“The grandmaster Bruce Lee said, ‘Be water, my friend.’ That’s what I do today.”

Both Silva and Ortiz are 46 years old. The bout was contracted for eight, two-minute rounds and at 195 pounds. Ortiz weighed five pounds over that catchweight limit Friday, coming in at 200 pounds.

Silva is the former longtime UFC middleweight champion and considered one of the greatest MMA fighters of all time. The Brazil native holds the longest winning streak in UFC history (16) and has the most knockouts ever in UFC title fights (7). Silva asked for and was granted his release from the UFC last November. “The Spider” had just one win in his last nine UFC fights. Silva has said he is effectively retired now from MMA.

Ortiz, meanwhile, is one of the best UFC light heavyweight champions of all time. “The Huntington Beach Bad Boy” had five successful UFC 205-pound title defenses, the second highest total in division history behind only all-time great Jon Jones. Ortiz, a California native, is also considered one of the biggest financial draws for the UFC over the years, with notable rivalries against Chuck Liddell and Ken Shamrock. He most recently fought in December 2019, an MMA bout against former WWE champion Alberto Del Rio under the Combate Americas banner. Ortiz won that via first-round submission.

Tyson Fury: If Tommy loses to Jake Paul, he can stay in Saudi Arabia
De La Hoya Eager To Sign Edgar Berlanga To Golden Boy: ‘Come Talk To Us, Or We’ll Fly To You’
Woman sues Tyson, says he raped her in 1990s
Chatterbox Exclusives: George Warren and Beterbiev join the gang | Artur Beterbiev v Anthony Yarde
Eubank will “let the dust settle” before deciding on Smith rematch