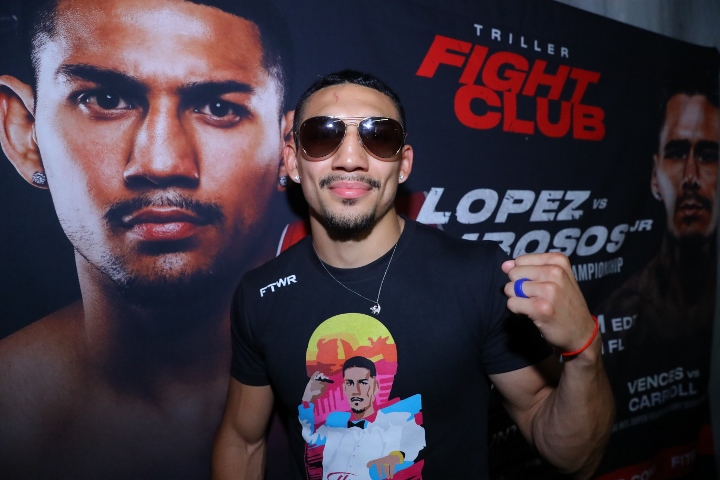 Unbeaten lightweight champion Teofimo Lopez is not very interested in a potential rematch with Vasiliy Lomachenko.

On October 4th, Lopez (16-0, 12 KOs) will make a mandatory defense against George Kambosos Jr. at the Hulu Theater in Madison Square Garden in New York City.

Lomachenko came back strong in June, when he dominated and stopped Masayoshi Nakatani in nine rounds. There is now talk that he could face former champion Richard Commey in December.

Top Rank, who promote both Lopez and Lomachenko, would like to stage a rematch.

But, Lopez sees no reason for a second fight.

“There’s no point in fighting Lomachenko,” Lopez said to ESPN. “I think that moving forward. That’s all it is, keep moving forward. Everything happened for its reasons. That’s really it. I beat the man that everybody said was the man. When the going went tough, he backed off. So now it’s all about staying forward on it.”

Beyond Kambosos, Lopez may very well move up to the junior welterweight division.

“I did everything at 135, became undisputed,” Lopez said. “Now it’s about going to 140, becoming undisputed at 140, God willing, and just continue on.”

The biggest target at 140 would be undisputed world champion Josh Taylor, who is also promoted by Top Rank. Taylor is scheduled to make a mandatory defense against unbeaten Jack Catterall in December.

There is a possibility that Taylor will make a move to welterweight in 2022 – which in turn would open up the door for Lopez to capture one or more vacant titles.