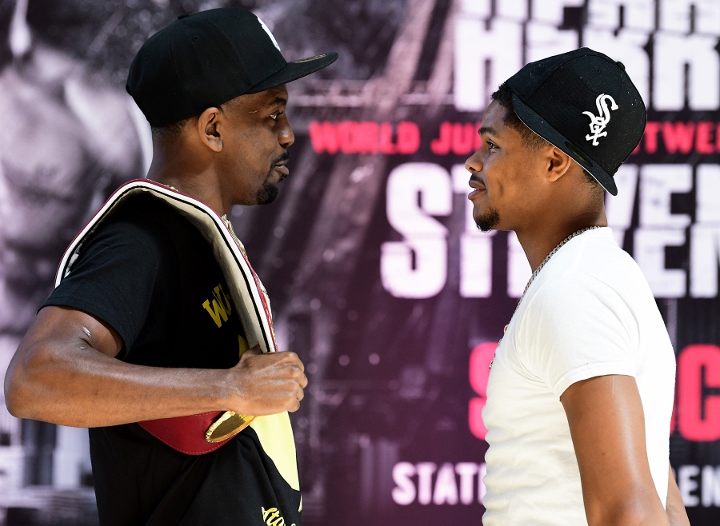 Much has been made of Stevenson’s uninspiring—though ultimately effective— effort in his twelve-round, unanimous decision win over Namibia’s Jeremia Nakathila. Their June 12 fight in Las Vegas to determine the next challenger in line for the WBO junior lightweight title held by Herring, who already banked on facing Stevenson (16-0, 8KOs).

Nothing about the process to lead to their upcoming October 23 clash has prompted the defending champion to view his upcoming challenger any other way than as another fighter after his crown.

“I was there, I heard the reaction but I didn’t go off of that,” Herring admitted to ESPN’s Crystina Poncher during the official press conference to announce his title defense versus Stevenson. “I know how talented Shakur is at the end of the day. I don’t feed off what people say.

“That’s their opinion. At the end of the day, they’re not in with a guy like Shakur, an elite fighter.”

Stevenson has barely lost a round since turning pro in April 2017, less than a year after claiming a Silver medal in the 2016 Rio Olympics. The unbeaten southpaw from Newark, New Jersey breezed to a WBO featherweight title during third year as a pro before moving up to the 130-pound division in pursuit of a second major title.

The journey has led to Stevenson taking on a familiar foe in Herring (23-2, 11KOs), who has held the WBO junior lightweight title since May 2019. The win came four fights into his union with head trainer Brian ‘Bomac’ McIntyre following a two losses in a three-fight span which left many to write off the Long Island-bred southpaw.

Faith was fully restored in his career following a sixth-round knockout of former two-division champion Carl Frampton this past April in Dubai. Still, Stevenson enters as the betting favorite ahead of their forthcoming ESPN headliner from State Farm Arena in Atlanta, Georgia. Herring is perfectly fine with that role, though doesn’t expect Stevenson to come in overconfident but rather with a chip on his shoulder.

“I believe in terms of him, he sounds a lot more hungrier,” insists Herring, who attempts the fourth defense of his title. “It’s going to bring a long more out of him, and will make for a better fight between the two of us. We both have something to prove in our own right. He’s young, he’s hungry and wants to be a two-division champion, which I respect.

“Me, I feel like I’m always counted out. I’m still fighting for my respect. That’s what keeps me motivated and hungry. This fight especially will bring out the best in us.”

‘CONOR BENN IS THE BAD GUY! Cancellation benefited CHRIS EUBANK JR’ – Roy Jones
Benavidez vs Plant Is ON for March 25 on SHOWTIME PPV in Las Vegas
De La Hoya Optimistic that Tank-Garcia Will Lead to More Collaboration With PBC
Jake Paul, Tommy Fury finalize deal for Feb. fight
Frank Warren: Beterbiev Is A Monster, But Our Guy (Yarde) Is, Too; If He Catches You, You Go