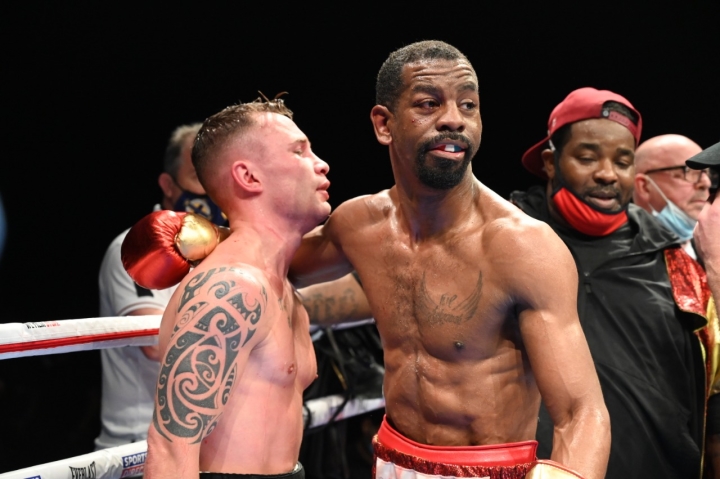 The undefeated Stevenson has seen only highlights of Herring’s sixth-round technical knockout of Frampton. Stevenson nevertheless cannot help but feel Herring has been given more credit than he deserves for stopping someone Stevenson considers an older, smaller fighter.

Herring (23-2, 11 KOs) successfully defended his WBO junior lightweight title by flooring Frampton twice, once in the fifth round and again in the sixth round, April 3 at Caesars Bluewaters Dubai.

“Other people was a lot more impressed than me,” Stevenson told BoxingScene.com. “I wasn’t really that impressed.”

Stevenson, who will challenge Herring for his 130-pound crown October 23 at State Farm Arena in Atlanta, wasn’t especially impressed because he views Herring as a bigger boxer who basically beat up a faded fighter who was better fit for lower weight classes. Though the since-retired Frampton fought at the lightweight limit of 135 pounds in his previous bout, the 34-year-old Irishman, a former champion in the 122-pound and 126-pound divisions, competed at the junior lightweight limit of 130 pounds for the first time when he fought for Herring’s championship five months ago.

Cincinnati’s Herring, meanwhile, was a lightweight before he moved down from 135 pounds to 130 following a 10-round, unanimous-decision defeat to Ladarius Miller (21-2, 6 KOs) in August 2018.

“I feel like Frampton is a dude – I don’t know if he fought at 118 or 122 – but I know he came [up] from a lower weight class,” Stevenson said. “Jamel is a dude coming from fighting in the [2012 Summer] Olympics at 141 pounds, like he’s a naturally big person compared to Frampton. And I just feel like he kind of bullied him, if I’m being honest with you. Don’t get me wrong – they both old, they both was at the end of they careers. But it was like a bully, you know, a big, old dude versus a little, old dude, you know? I don’t give that performance that much credit to be honest with you, like everybody else do.”

The first 13 of Stevenson’s 16 professional fights were contested at or near the featherweight limit of 126 pounds. The 24-year-old Stevenson (16-0, 8 KOs), a 2016 Olympic silver medalist from Newark, New Jersey, moved up to the junior lightweight maximum of 130 pounds early in 2020.

The 5-feet-10 Herring still stands three inches taller than Stevenson, a fellow southpaw. Herring held a five-inch height advantage over the 5-feet-5 Frampton (28-3, 16 KOs), who lost inside the distance for the first time in 12 years as a pro.

In his most recent appearance, a defensive-minded Stevenson out-boxed Jeremiah Nakathila and won a 12-round unanimous decision. Stevenson captured the WBO interim junior lightweight title when he beat Namibia’s Nakathila (21-2, 17 KOs) on June 12 at The Theater at Virgin Hotels Las Vegas.

Artur Beterbiev Ready For Weekend Throwdown With Anthony Yarde
Benavidez vs Plant Is ON for March 25 on SHOWTIME PPV in Las Vegas
Gary Russell Jr: “I Would Fight Isaac Cruz, I’ll Burn His Ass Up”
A Life’s Work: Anthony Yarde and the eight-year training camp
Mayweather Jr to fight reality star Chalmers