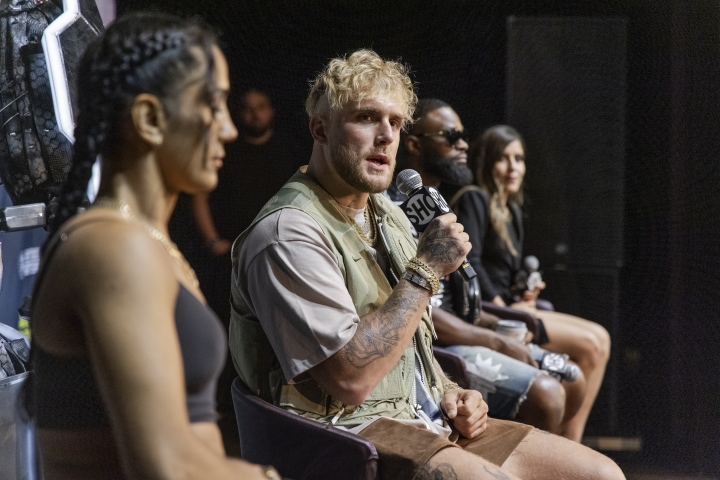 The YouTube phenom recently revealed that he will be helping his friend and training mate Amanda Serrano navigate the business end of her boxing career. In fact, Paul says he is currently involved in talks with promoter Eddie Hearn to stage a title bout between Serrano and Hearn’s client, Ireland’s Katie Taylor, the undisputed women’s lightweight world champion. Paul founded his own promotional company – MVP – earlier this summer.

“We’re excited to announce that we’re going to be working with Amanda Serrano, who is one of the greatest female pound-for-pound fighters of all time,” Paul told Ariel Helwani on The MMA Hour. “We are actively in talks with Eddie Hearn, and Most Valuable Promotions, which is my promotional company, to try and figure out Amanda Serrano and Katie Taylor, to make it like the biggest women’s fight of all time.”

Serrano (41-1-1, 30 KOs) herself recently hinted that the Taylor fight was a real possibility and confirmed that she was working with Paul (4-0, 3 KOs) and his manager Nakisa Bidarian.

“GOD IS GREAT!” Serrano, 32, wrote on her Twitter account. “I’m in a Great position to do huge things. I have @EddieHearn on board to make this mega fight & pay me my worth. My new business team @jakepaul @BAVAFASports making sure I’m PAID. DID I already say GOD IS GREAT? Oh OK cause he is!”

An unlikely duo, Paul and Serrano have both unreservedly expressed their admiration for each other, with Paul praising Serrano’s boxing abilities and credentials, and Serrano admiring the upstart’s fresh approach to marketing a sport often criticized for its outdated appeal. Both appeared on the same card headlined by Paul’s eventual eight-round cruiserweight split decision over Tyrone Woodley on Aug. 29 at Rocket Mortgage FieldHouse in Cleveland, Ohio on Showtime pay-per-view. In the wind-up, Serrano, a seven-division champion, scored a dominant decision over Yamileth Mercado to defend her WBC/WBO/IBF featherweight titles.

As far as maneuvering his own promotional label goes, Paul says he expects to take on a more managerial role rather than as an out-and-out promoter.

“Yeah, that’s part of the plan [signing fighters],” Paul said. “We don’t necessarily want to be mixed up in the weeds of being a typical promoter, but I think we more so want to be on the management and advisory side because I think that’s where we can provide more help. And on the promotional side of just acting like a promoter, but not actually being one, like posting on social media, YouTube, Twitter. That’s really what matters now for fighters, getting their names out on social media and that translates to pay-per-view buys. That’s where I come in, that’s our differentiating factor.”