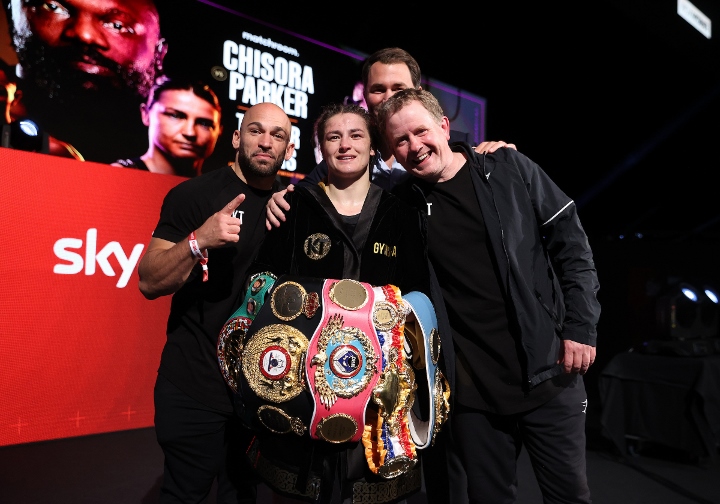 A visit to the gym where Katie Taylor trains in Connecticut in early 2018 said everything you needed to know about the undisputed lightweight champion.

It’s a small place, no tanning beds, no smoothie bar, with the only “ornaments” being various banners celebrating some of the fighters who work there.

Taylor had no banner at the Manchester Ring of Champions Society (ROCS) gym, and she was fine with it. More than three years later, nothing has changed.

“We still don’t have one,” laughed Taylor’s trainer, Ross Enamait. “You wouldn’t even know we train there.”

Back then, Taylor only had one 135-pound belt and was about to pick up a second by beating Victoria Noelia Bustos. Today, the two-time Irish Olympian has all the belts while sitting atop the women’s pound-for-pound list with a perfect 19-0 record. She was getting a lot of attention in 2018, and things have only gotten bigger for the Bray native. But as far as it all getting to her head, nope, not happening.

It’s very possible that the secret to the 35-year-old’s success is that she doesn’t pay attention to such matters. It probably helps that she couldn’t even fit an entourage into the gym on Main Street.

“It certainly helps,” said Enamait. “She’s not caught up in the hype or changing who she is or acting a different way, so it certainly doesn’t hurt. I don’t know if it’s the secret, but it’s definitely not hurting her. If she had changed who she is, who knows what she’d be doing, but she’s never gonna change, I can tell you right now for a fact.”

Enamait, who has been in Taylor’s corner throughout her entire pro career, is more no nonsense than most no nonsense folks. Maybe it’s an east coast thing, or having seen the good, the bad and the ugly of the fight game, but whatever it is, he’s going to give it to you straight, and if he vouches for the character of the pound-for-pound queen, you can take that as gospel.

So with real life under control for Taylor, that’s translated into her day job, where she scored her 19th win on September 4 by throwing a shutout over Jennifer Han. It was a workmanlike effort for Taylor, who was steady, but not spectacular, from start to finish, and that was good enough for her coach.

“It went kind of the way I thought it would,” said Enamait. “I remember Jennifer from the amateurs; she’s been around forever, and I knew that she moved well and she’s fairly elusive. Louie Burke, her trainer, he’s a good coach and a good fighter himself, and I had a feeling they weren’t gonna engage too much, so it’s tough hurting someone that’s not trading with you, so I had a feeling it was going to be a distance type of fight. It went ten rounds, and she didn’t really get hit and won every round, so it’s not a bad night.”

Getting three 100-89 scores in your favor is a pretty damn good night, but Taylor has reached the point in her career where fans are starting to nitpick to find something wrong with what was a steady performance from a champion who controlled a fight without having to kick it into a higher gear. And while Han wasn’t a big name, she was a respected veteran and former featherweight champ who was certainly well known to women’s boxing fans. But to the casual followers of the sport…

“I think you get that probably more with the women just because there’s not too many household names,” said Enamait. “I remember Jennifer Han because she fought a girl from Connecticut a couple times in the amateurs, probably 15 years ago. So I knew of her, and she’s from a boxing family. Her brother (Abraham) was a good fighter, he fought Sergio Mora tough. She’s not one of these girls that picked up boxing in a fitness class and decided she wanted to fight. She grew up in a fighting family. But when you win every round and don’t really get hit, you can’t be too upset about it. Not taking punishment and getting a W, if people don’t like that, you can’t please everybody.”

“She (Han) is better than a lot of people realize that are just looking at her name without knowing who she is,” he continues. “People were saying she’s smaller and was coming up in weight, but the thing that a lot of people don’t realize is that Katie’s small for a lightweight. She’s really fighting above her natural weight just because there’s more competition at 135. She eats all week the week of the weigh-in, so we’re already small. Even if you look at the fight, it’s not like we were bigger than Jennifer Han; we probably looked smaller in the ring if you look at some of the pictures.”

Enamait laughs, glad that these are the only “problems” he has to deal with. He’s not worried if Taylor is going to show up to the gym, if she’s out partying or putting on pounds that will be difficult to run off. She’s a pro, and her rise to the top of her sport proves it. But when you’ve reached the top, won all the belts and have established yourself as the best in the game, does motivation now become an issue? If it has, Enamait doesn’t see any inkling of it.

“She loves her boxing,” he said. “She feels blessed to be able to do what she does. When she stops loving it is when she probably would walk away, but she’s not even close to that. She’s from a fighting family herself. Katie’s father fought, her brothers fought, this is in her blood and it’s all she’s ever done, and she loves it. So as far as motivation, she’s a competitor and she wants to win, whether it’s rock-paper-scissors or whatever. She wants to go out there and compete. And Katie wants to fight everybody. She wants to fight the best and she wants all these fights, and she’s hoping that they’re coming sooner rather than later.”

I guess that’s the million-dollar question. If business matters weren’t an issue, who would Enamait like Taylor to fight?

“I think Amanda Serrano is the biggest fight out there you can make,” he said without hesitation. “I know there’s been talks of (undisputed welterweight champion) Jessica McCaskill as an option, and she’s solid herself and I’m sure that would be a great fight, but we outboxed her pretty clear already. I know she’s improving but I’d rather fight Amanda Serrano because we haven’t fought her yet. It’s something new and Serrano’s got her own following, she’s been successful for a long time and that, to me, is the biggest fight in all of women’s boxing. I think it’s a tough argument for any other fight to be as big as that. We wanted it before and we still want it, so the ball’s in their court and they gotta decide do they really want this or not.”

And if it happens?

“It will be a real exciting fight for the fans because they’re both gonna be there trading.”

Oscar De La Hoya Believes Ryan Garcia – Gervonta Davis Will Be Announced “In The Next Few Days”
OFFENSIVE? YOU DECIDE! The Smith comment to Eubank Jr SKY SPORTS APOLOGISED FOR
It’s official, Jake Paul and Tommy Fury will settle things once and for all 🥊#PaulFury
Jake Paul-Tommy Fury Officially Set To Fight February 26th In Saudi Arabia
“Yarde is the special one, not Beterbiev,” says Tunde Ajayi