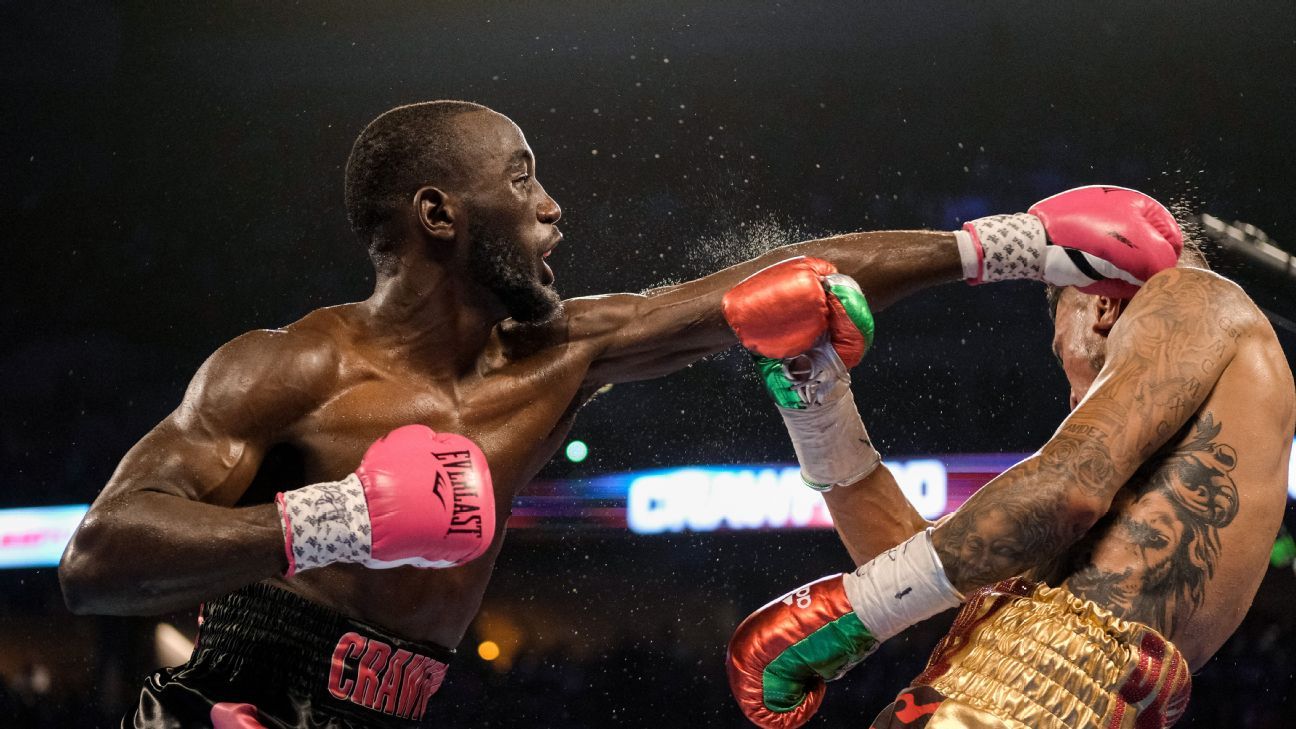 WBO welterweight champion Terence Crawford will get the signature fight he’s wanted when he faces former champ Shawn Porter on Nov. 20 at the Mandalay Bay Hotel and Casino in Las Vegas.

Crawford (37-0, 28 KOs), 33, of Omaha, Nebraska, hasn’t fought since a fourth-round TKO victory over Kell Brook in November 2020. He won the title against Jeff Horn in 2018 and has victories over Jose Benavidez Jr., Amir Khan, Egidijus Kavaliauskas, and Brook, but none of those names are at the top of the welterweight division, like Errol Spence Jr. Keith Thurman, Danny Garcia, Yordenis Ugas and Manny Pacquiao, to name a few. So Porter becomes that name that can solidify Crawford as the best fighter in the division and further enhance his status as one of the best pound-for-pounders.

On the other hand, Porter (31-3-1), 33, of Akron, Ohio, has fought pretty much everybody. He has victories over Ugas, Garcia, Andre Berto, Adrien Broner and Paulie Malignaggi, and close loses to Brook and Thurman.

His style could give Crawford some problems, but can he do something nobody else in boxing has done — hand Crawford the first loss of his career?

Editor’s note: Responses have been edited for clarity and brevity.

I think all boxing fans understand what both these guys bring into the ring. Porter is a tough out for anybody. It’s hard to look spectacular, or even great against Porter. He brings this sort of roughhousing style into the ring which doesn’t allow his opponents to get comfortable. He’s a bully, a tank inside that ring.

But he’s also very intelligent in the ring. He’s a guy that understands his strengths and he understands his weaknesses. He understands what he’s capable of doing at this point in his career. I’m sure he has no doubt in his mind that he can beat Crawford, and he actually wanted this fight. He wanted Crawford! He called him out.

Crawford has been needing a fight of this magnitude, needing a dance partner that can not only test him physically, but also test him mentally. Crawford’s career had kind of come to a halt due to the lack of top competition with Top Rank. I applaud Porter and also applaud Crawford for taking this fight.

We’ve been talking about Crawford for some time now, how special he is and that’s the reason why he’s been the No. 2 pound-for-pound fighter in the world. But now we get to see him in a tough test, and if he can execute this test in spectacular fashion, then everything that we’ve been saying about Crawford is true, and no one should have any questions about how great he is after this fight.

How can Porter give Crawford problems?

It’s going to be extremely difficult to outbox Crawford. He’s taller, rangier than Porter. He can box off his back foot, is great in transition — he really is a complete fighter. The only other thing that I can see Porter doing is being Shawn Porter. Changing up his rhythm, surprising Crawford when Crawford is relaxing or is trying to rest. Be aggressive, be relentless, give Crawford something he has never seen before inside the ring during his professional career. Show him you are a guy that’s going to be tenacious, a guy that’s gonna try every single minute of every round. Porter will be in his face, keeping the pressure on. He’ll be cerebral also, changing rhythms and be an opponent who will bang down to the body. Taking that approach will show his strength on the inside and prevent Crawford from getting his own rhythm. Crawford is a rhythm type of fighter, and once he starts getting comfortable he’s tough to deal with. But if you never let Crawford get going and you always throw him off his game, then you can give him problems, there’s no doubt about it.

But the risk has to be calculated and I think that Porter understands that. Porter has a really good chin and is someone who doesn’t shy away from the action. He has the mindset that he’s willing to take your best to give his best. He kind of reminds me of myself in that aspect of having that determination, that will to win. That’s something that you can’t teach.

Porter wants to be the best so it’s hard to stop a guy like that. If you don’t hurt Porter or knock him out, it’s going to be a tough out for you. The fact that Crawford is double-fisted, the fact that he can switch things up and the fact that he’s fantastic in transition, it’s not like Porter is going to be able to rush in on Crawford, because Crawford can throw his combination moving backwards and still have punching power and catch Porter on the way in.

It’s going to be a very difficult fight for both guys. Both have their advantages, Porter being a really busy guy and Crawford showing his impeccable timing. For me, Crawford is a once in a generation talent. His skill set and his mindset is what makes him who he is, and it’s gonna be tough to beat him, but Porter brings the style that could do just that.

How does the fight play out?

The first four to six rounds are going to be extremely interesting. Whether people think this or not, Crawford is a slow starter — a guy that will look at you to see what you are trying to do and then make his adjustments.

Brook had a good first couple of rounds, and he was catching Crawford. Crawford was trying to find his rhythm and Brook kept him occupied with his jab, kept him outside, occasionally landing a right hand. He made it difficult for Crawford to get where he wanted to be. And then when Crawford switched to southpaw — that’s when everything changed. Crawford figured it out and made that adjustment. I think we could see some similarities in this fight.

Porter is going to have to deal with the southpaw stance as well as with the orthodox stance. And he’s going to have to switch his attack instantly once he sees that, and that’s the hardest thing when you’re fighting a guy like Crawford. He’ll need to be ready for everything. Training camp is a lot more expensive when you fight a guy like Crawford. Not only do you need to get southpaws to spar against, but you also need to get orthodox fighters as well.

You definitely have to raise the bar when fighting Crawford because he is very methodical. He takes his time and, as soon as you miss, he makes you pay for everything that you do wrong. You must think twice before doing what you want to do, because Crawford will just take his time and capitalize on every mistake you make. Fighting him is like a chess game. Be smart or you’ll pay the consequences.

I fought Crawford three times as an amateur, and the best fight was the first time in Oxnard, California. I just pressured him and got close to him and I danced around. Although I lost that fight I really didn’t think I lost. It came down to the judges. The crowd was booing because I gave him an 8 count and then right after that, Crawofrd landed a 1-2 and the referee gave me an 8 count. The second time around, in Colorado Springs, he just had me figured out; that fight was tough.

How do you beat Crawford?

To beat him, do what I did in that first fight. I pressured him and I closed the gap. Porter is someone who fights dirty, he fights at close range, and he pressures his opponents. That’s the way I felt I did best, when I thought I’d beaten Crawford at the town nationals. Putting constant pressure and making it a dogfight and making him lose his head, because when he’s in there, he’s very focused. But if you take that away from him, then he has to readjust and while he’s doing that he’s going to be more prone to making mistakes.

Porter leans on you, he holds you, he throws punches time after time, round after round, and that can really devastate a fighter and throw him off his game. Porter needs to make this fight ugly, not let Crawford get comfortable because if he does, that’s where Crawford gets in rhythm and fights relaxed. And when he’s relaxed, and you give him the time and the space he needs to figure you out, he’s gonna do it and he’s gonna do it fast.

So, try to keep him off his feet constantly, be in front of him, move to the side, pressure him, get him uncomfortable, hold him a little. Porter has to throw him off his game — that’s the key to beating Crawford.

Prediction: Crawford’s always been a master at his craft. If Crawford uses his reach and his movements and keeps the fight at the distance he wants, he’s gonna get the victory. He’s a smart guy, he’s talented, he’s very focused. He’s one that’s always been true to himself and to the sport, so I feel that it’s gonna be Crawford with the victory. Although Porter has what it takes to beat him, I just don’t see it.

Porter’s strength is fighting at close range and throwing his left and right overhands. Because of his height, those are Porter’s best punches. I remember that he gave me a lot of trouble when we fought. He kept getting closer throwing the overhand left. He landed a few on me, and I can say that he hits very hard. He has a strong punch and he’s very comfortable fighting inside.

Crawford manages the distance very well, he’s a tough fighter, but I feel that if Porter has the confidence to get inside while taking some punches, and he’s willing to take a couple of hits to land his punches to the body and head, I think he can give Crawford something to think about.

The overhand left is Porter’s best shot. Porter knows how to cut the distance to land that punch — he’s smaller than Crawford but he knows how to use his height as an advantage. He is always looking to get inside. But his mental toughness and the fact that he never gives up, that’s his best weapon.

When I fought Porter, I hit him with a lot of shots, but I almost got desperate because he kept coming. His mentality is that he has no problem taking two hits to land one. He always goes forward, and he doesn’t mind being hit, just as long as he can land a power punch. That was exactly what happened when I fought him. I kept hitting him, but he kept coming forward. I hit him with uppercuts, the straight right, and he didn’t go down, he kept coming. That is going to be key against Crawford. If Porter can do that and force Crawford to get frustrated and a little desperate, Porter can get him in trouble with one of his overhands or body shots.