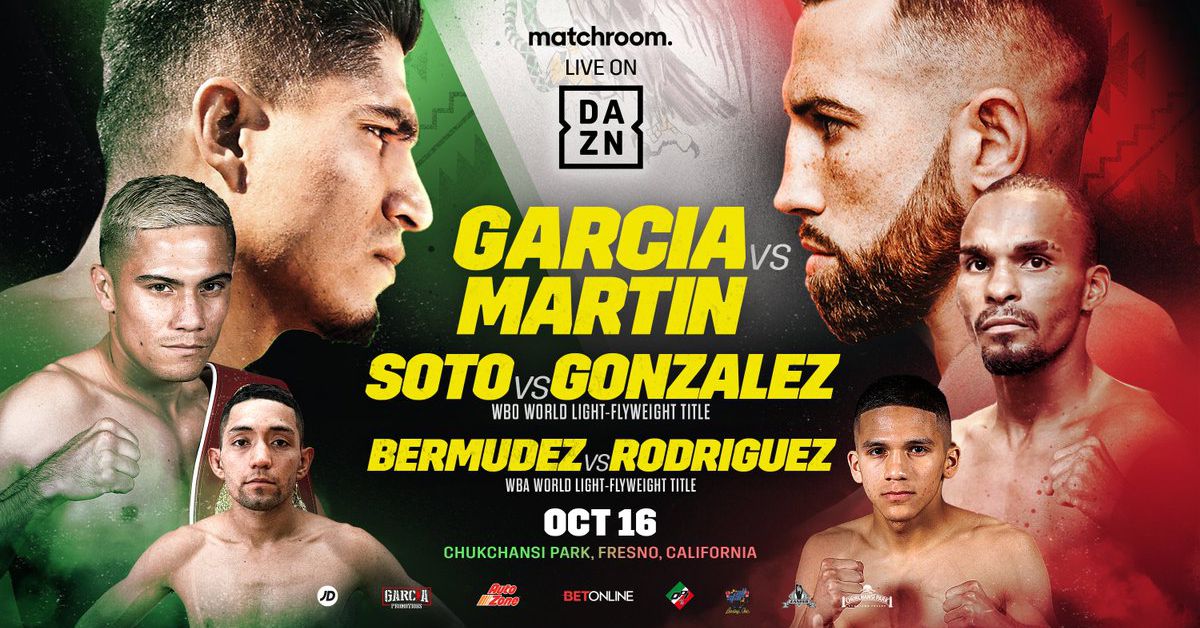 Garcia (40-1, 30 KO) had been linked to a genuinely interesting fight with former unified titlist Regis Prograis, but that’s either dead or on the backburner. He’ll instead fight Spain’s Martin (38-2, 13 KO), who’s defended his title three times since recapturing it against Andrea Scarpa in 2019. He was last seen cruising past Kay Prospere in April.

“I’m very excited to get back in the ring and give my fans another night to remember,” said Garcia. “I’m looking forward to seeing everyone on October 16 in Fresno – it’s going to be a great night of boxing.”

“I’m so excited for this opportunity,” said Martin. “The sport of boxing brings me the chance to change my life. There will be a before and after for everyone in this fight.”

The co-feature pits WBO light flyweight champion Elwin “La Pulga” Soto (19-1, 13 KO) against mandatory challenger Jonathan “Bomba” Gonzalez (24-3-1, 14 KO) in a Mexico vs. Puerto Rico clash originally planned for this month. Gonzalez is a fair bit better than his record suggests, having put forth an excellent effort against Kosei Tanaka in his last title bout, and Soto’s loads of fun to watch. This could very easily steal the show.

“I can’t wait to get back in the ring and defend my title,” said Soto. “Texas was a great night and I think this will be too. Gonzalez is a proud Puerto Rican contender, and we all know that when Mexico and Puerto Rico step through the ropes, there are fireworks, so the fans are going to love this fight.

“I’ve been waiting for this opportunity for a long time,” said Gonzalez. “Soto’s style fits me perfectly. It will be a war of Puerto Rico vs. Mexico.”

The opener sees WBA “world” light flyweight champ Esteban Bermudez (14-3-2, 10 KO) defend his belt against #2 contender Jesse “Bam” Rodriguez (13-0, 9 KO). On the one hand, it’s a real nice matchup; Bermudez came out of nowhere to demolish Carlos Canizales earlier this year and Rodriguez is a solid prospect making a good step up. On the other, I’m not exactly sure how this came to be. The WBA previously ordered Bermudez to fight “Super” champ Hiroto Kyoguchi, and the two sides were far enough along in negotiations to delay the purse bid. I have to assume that Kyoguchi’s injured or otherwise unable to compete at the moment; maybe Japan’s COVID protocols are keeping him out of the States?

Why yes, that is wildly unfounded speculation. What do you think Scott pays me for?

Update: Turns out the WBA didn’t actually approve the matchup and Bermudez is still ordered to fight Kyoguchi, so this could get weird.

“This is going to be a great fight,” said Bermudez. “Jesse is a really talented fighter, and I am sure that he will be in great shape and ready to rock on October 16, but I worked too hard to become World champion to let it go in my first defense, so this will be a war.”

“I know it won’t be an easy fight, but I plan on walking out of the ring October 16 as the new World champion and bring the title home to San Antonio. It will be an honor for me and my brother Joshua to be World champions at the same time. I am training very hard and promise I won’t disappoint anybody.”