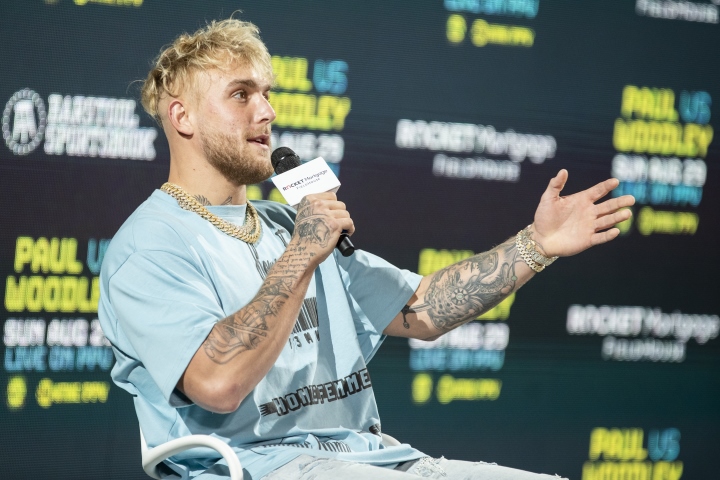 The fight drew a mountain of negative coverage, because most observers felt Holyfield, 58-years-old, had no business being in the ring.

The Holyfield-Belfort event was staged by the Triller app.

During his post-fight interview, Belfort continuously called for a fight with Paul. Two of the top executives from Triller joined in – offering $30 million for Paul to take the fight.

Triller had promoted two of Paul’s pro fights. Paul has since signed an exclusive multi-fight deal with Showtime – and made his debut with the network last month, with an eight round decision over Tyron Woodley.

“It just seems a little bit desperate with them getting Vitor to call me out,” Paul told the MMA Hour.

“It’s like clout-chasing, this guy has been in my DMs since 2017, you know, begging for a fight.”

Paul would later explain that his first in-person interaction with Belfort took place at a college football game earlier this year.

“I’m sitting at Ohio State NCAA championship football game. And he’s like, in the stands; comes running up to me with his son,” Paul said.

“His son asks for a picture and he’s like, sitting there and looking at me, like, kind of mad, and I’m like, ‘What’s going on, sir? Is everything okay?’ And he wouldn’t leave and he said, ‘Do you recognize me?’ So just out of respect I said, ‘You look kind of familiar’. and he’s like, ‘I’m Vitor Belfort. You know, I’ve been thinking about it…’

“And he starts to go on this five-minute pitch about why we should fight – I’m like, ‘Dude, like, I’m watching a football game. Like, please leave me alone, old man’. Since that day, he’s been obsessed with this idea of fighting me.”