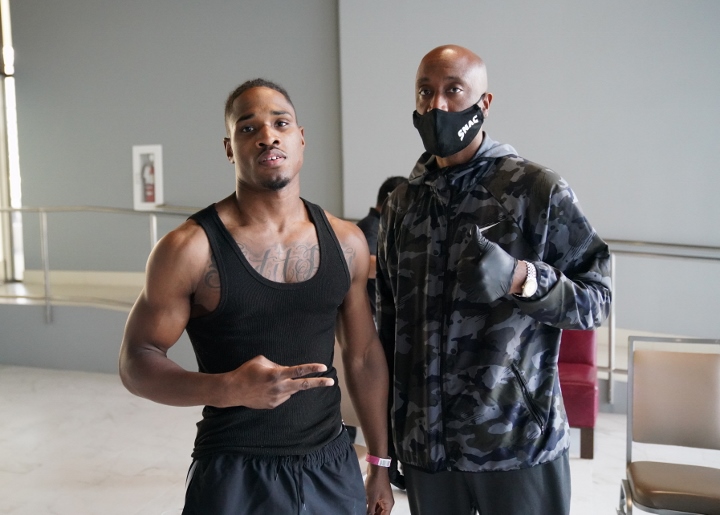 Earlier this month, Kyrone Davis improved his record to 16-2-1 when he defeated Martez McGregor (8-5) by unanimous decision at The Armory in Minneapolis. The fight topped a FS1 card that preceded a Premier Boxing Champions on FOX telecast.

The foul marred fight was close with three point deductions against McGregor proving to be the difference on the scorecards. The final tallies in favor of Davis were 75-74 twice and 77-72.

After the fight Davis’ trainer Stephen “Breadman” Edwards explained that they took the fight on short notice and that he felt the opportunity to stay busy was too good to pass up.

“We took the fight on 2 weeks notice. Considering that, I thought Kyrone did decent,” said Edwards.

“McGregor is a tough, athletic guy and he showed up but I thought Kyrone won 5 or 6 rounds. I take full responsibility if his performance wasn’t as good as the Dirrell performance. But we last fought in February. Kyrone is a kid who had been off for a year before that fight with no injury. So in this climate, I made the decision to stay busy and that’s on me, not Kyrone.”

Edwards was referring to Davis’ February 27th fight against Anthony Dirrell that was ruled a draw. Many observers felt that Davis had done enough to earn a victory over the former world champion.

“We have to get Kyrone back down to 160, which is his natural weight. I’m not a trainer that needs 8 weeks but we probably pushed it with a 2 week notice as far as stamina. Kyrone was sharp early but he didn’t have his usual second wind,” Edwards told BoxingScene.com.

As for the point deductions and roughhouse tactics, Edwards, who is also a BoxingScene.com contributor, said that comes with the territory of being a professional fighter.

“The fouls are the fouls. It’s part of the game. I think that effected him but he didn’t complain. Part of boxing is keeping your composure. McGregor didn’t keep his so he was penalized for it,” Edwards said.

Ramirez vs Dogboe interim title fight official for Apr. 1 in Tulsa
Editor’s Letter: It’s likely to be a long road back for Chris Eubank Jnr
Overcoming Artur Beterbiev is Anthony Yarde’s toughest challenge yet, but he’s entering the ring without fear
Rocha Knocks Out Ahsie In Seventh
BN Verdict: Brilliant Yarde does everything but win against brutal Beterbiev