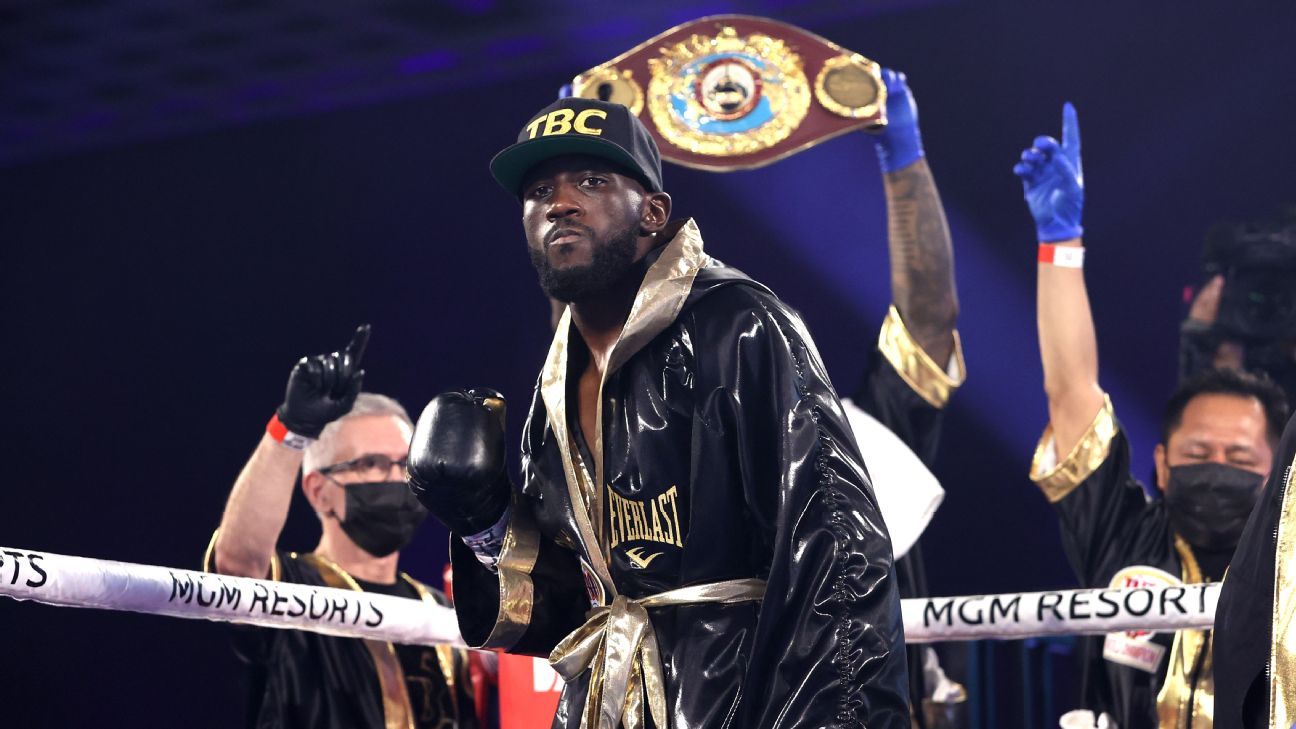 Terence Crawford is one of the best pound-for-pound fighters in the world, the current WBO welterweight titleholder and a former undisputed junior welterweight champion. However, he’s been critiqued for not facing the best fighters in the welterweight division. One of the issues is that most of the top 147-pounders are with a different promoter and it has been hard to make the fights. That’s all changing in November as Crawford will face Shawn Porter in the final fight of his contract with Top Rank. After that, is he ready to move on and look for those other big fights?

Another Top Rank fighter, lightweight champion Teofimo Lopez, has expressed his desire to move up to junior welterweight after his Oct. 4 fight against George Kambosos Jr. and face undisputed champion Josh Taylor. But should he stay at 135 to face Vasiliy Lomachenko in a rematch?

One of Lomachenko’s training partners, former cruiserweight king Oleksandr Usyk, moved to heavyweight in 2019 and has scored victories over Chazz Witherspoon and Dereck Chisora. But he hasn’t looked dominant in his new division, and not many would be surprised if he gets run over by unified champion Anthony Joshua on Sept. 25.

Canelo Alvarez is also looking to become undisputed when he faces Caleb Plant on Nov. 6 to unify all major super middleweight world titles. Is his next goal to move up to light heavyweight to unify belts at 175 pounds, or will welterweight titleholder Errol Spence Jr. make a move that could keep Alvarez where he is?

Coppinger: The welterweight champion’s fight with Porter is the final bout on Crawford’s latest contract with Top Rank. He’s been with the company since 2011, but since last year, the relationship has grown sour.

Arum publicly asked, “Do we want to keep him?” while explaining that Crawford “could build a house in Beverly Hills on the money I’ve lost on him in the last three fights.” Those comments were ahead of Crawford’s November victory over Kell Brook.

There have been no substantial talks between Crawford and Top Rank toward an extension, sources tell ESPN. Crawford’s inability to land a name opponent has been a source of frustration for ESPN’s No. 2 pound-for-pound boxer. The Porter assignment, at long last, finally delivers the kind of foe he’s been seeking.

At this juncture, it’s hard to see Crawford re-upping. Tuesday’s deal for the Nov. 20 fight can only help matters, but Crawford, 33, will surely have plenty of suitors. PBC, of course, is home to the rest of the world’s best welterweights. Whatever Crawford decides to do next, the fight with Porter — and how he performs in his biggest test yet — will help decide how much interest there is and what kind of money he’ll command.

Alvarez hopes to change that, and has a chance when he meets Plant on Nov. 6 (there’s also never been an undisputed 168-pound champion with all four belts).

Assuming Alvarez wins — and he’s a heavy favorite to do so — he has plentiful options at super middleweight, where he’s rated No. 1 by ESPN. He could fight David Benavidez, a volume-punching Mexican-American whom many experts tab as the man with the best chance to upend Alvarez. There’s also Jermall Charlo, the middleweight champion with plans to move up in the near future. Both Benavidez and Charlo are aligned with PBC, the company that will promote Canelo-Plant. Alvarez is a promotional free agent.

There’s also the prospect of a trilogy fight with Gennadiy Golovkin, only this time at 168 pounds. But if none of those options are appealing to Alvarez — or don’t materialize — he could always return to 175 pounds.

Alvarez has competed once at light heavyweight, a brutal knockout of Sergey Kovalev in 2019 to win the championship. After talks with Plant initially stalled, Alvarez entered negotiations with light heavyweight titleholder Dmitry Bivol. However, the biggest fight of all at 175 pounds is a matchup with Russia’s Artur Beterbiev, a power-punching fighter who is bigger — and stronger — than Alvarez.

Undoubtedly, Alvarez will make a run at 175 pounds in the near future. The pound-for-pound king is just 31.

Baby: There is no question Lopez is one of boxing’s rising stars and deserves all the credit for fighting — and then beating — Vasiliy Lomachenko.

However, Josh Taylor is the undisputed champion at junior welterweight for a reason. He won the World Boxing Super Series tournament with a gritty decision over Regis Prograis, and announced himself as an elite fighter with that performance. Taylor also won all four major belts by taking down Jose Ramirez, who had won his share of the 140-pound crown the hard way before losing to Taylor.

The combination of Taylor and trainer Ben Davison, who is arguably the frontrunner to be the top trainer of ’21, will be a lot for Lopez to overcome. Lopez is certainly capable of knocking Taylor off. But Taylor is a handful for anybody at 140 pounds right now — Lopez included.

Parkinson: Expect Joshua to storm to his best win since stopping Usyk’s fellow Ukrainian Wladimir Klitschko in 2017. Usyk hasn’t been hit by anyone as powerful as AJ, who also has the boxing skills to open up Usyk on his way to inflicting his first defeat.

Usyk’s movement and precision will be a challenge for Joshua, but the English heavyweight is no slouch and can box himself. Remember, they both won Olympic gold medals at London 2012, but it is Joshua who is more experienced at heavyweight.

Usyk has had just two heavyweight bouts since stepping up a weight class, and the power of Joshua could come as a shock. Needless to say, Joshua is a step up from Usyk’s last opponent, Derek Chisora, who last challenged for a world title in 2012. Usyk contained Chisora rather than seriously threatening a knockout in his first real heavyweight test, which he won by scores of 117-112, 115-113 and 115-113 in November. A similar performance won’t work against Joshua.

AJ has only gone to decisions twice as a professional (against Andy Ruiz Jr. in the rematch, and Joseph Parker), and he looked dominant when he knocked out Kubrat Pulev in the ninth round in his most recent fight. In that bout Joshua also showed how he’s able to capitalize once he’s opened up his opponent.

It’s simply too soon for Usyk to challenge for a world title. Expect him to be under pressure in the late rounds when Joshua looks for the KO. Joshua only needs to land once, and it’s likely he will hit the target late in the fight as he did against Klitschko in the 11th round.

Don’t be surprised if Errol Spence Jr. vacates his welterweight titles and moves up in weight to chase bigger fights

Dansby: Errol Spence Jr. missed out on his welterweight title fight with Manny Pacquiao due to injury, but there’s still a route to other big-money bouts if he chooses. It may come as a surprise to some, but that path does not go through WBO welterweight champion Crawford.

Don’t be shocked to see Spence vacate his WBC and IBF welterweight titles in pursuit of chasing those same belts at junior middleweight and beyond. Spence underwent surgery for a retinal detachment/break in his left eye in August, which forced him out of the aforementioned Pacquiao bout, so a lengthy rehab stint could hinder his ability to continue to campaign at the 147-pound limit. A career welterweight, Spence has been ripe for a step up in weight class. That jump in division offers matchups with Brian Castano, Golovkin, Demetrius Andrade and PBC stablemates Jermell and Jermall Charlo.

Most fans and pundits assume Spence returns to face fellow pound-for-pound fighter Terence Crawford, but neither has cracked the one million pay-per-view sale number in his career. Collecting titles at higher weight classes not only builds Spence’s legacy as a champion in multiple divisions but also sets him up as a worthy opponent for pound-for-pound king Alvarez within the next few years. Although it’ll take a considerable jump in weight, a fight with Alvarez in 2022 or 2023 is considerably more profitable than a welterweight unification bout with Crawford or any other champion in the class immediately upon his return.

Editor’s Letter: Yarde’s performance against Beterbiev demonstrated not only his quality but the importance of experience
Baumgardner: I Definitely See A Rematch With Mayer; Second Fight Will End By Knockout
Heather Hardy Returns To Action on February 23 at Sony Hall
10 takeaways from Artur Beterbiev’s thrilling eighth-round stoppage of Anthony Yarde
Luna vs Commey FULL FIGHT: March 10, 2018 | PBC on Showtime