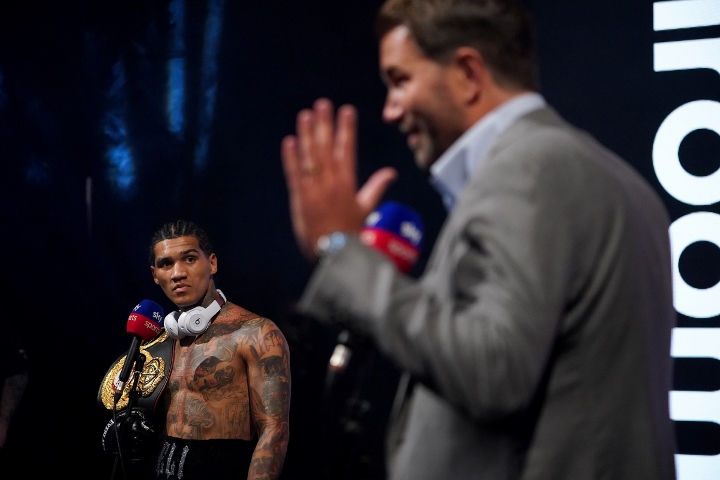 Conor Benn will keep his team intact as he aims to advance from prospect to contender.

The unbeaten welterweight continues his working relationship with Matchroom Boxing, with the two sides confirming a new multi-fight deal in place. News of the extended agreement comes on the heels of Benn’s recent ten-round win over veteran contender Adrian Granados earlier this month in Leeds, England.

“I am extremely excited to extend my professional relationship with Matchroom Boxing,” said the 24-year-old Benn. “Matchroom believed in me from the start, they gave me an amazing opportunity and have supported me to grow as a professional fighter.

“Now with the backing of a global streaming platform in DAZN we have made huge plans to be involved in big fights, headlining major events across the globe and making progressive moves towards achieving my goal of being a World Champion in the near future.”

Benn (19-0, 12KOs) has fought on Matchroom-promoted events since his celebrated pro debut in April 2016. The moment came on the undercard of Anthony Joshua’s second-round knockout of Charles Martin to claim his first heavyweight title. At the time, Benn was merely known as the son of Nigel Benn, the former two-division titlist and an integral part of the United Kingdom boxing scene during the 1990s.

In the five-plus years that followed, the second-generation boxer has carved out his own reputation as a welterweight to watch.

The 2021 campaign for Benn opened with an explosive performance, scoring a first-round knockout of veteran trialhorse Samuel Vargas this past April. The feat forced the boxing public to take notice, even as Vargas remains best known for his losses (Errol Spence Jr., Danny Garcia, Amir Khan, Luis Collazo, Vergil Ortiz Jr.) though none as brief as his 80-second blitzing at the hands of Benn.

Granados never quite presented the same opportunities this past September in Leeds. The bout came five weeks after its originally scheduled July 31 date which was postponed after Benn tested positive for Covid. The delay moved the fight from its own headliner at Matchroom headquarters in Brentwood, Essex to the undercard of the celebrated, though anti-climactic rematch between Mauricio Lara and Leeds-based former featherweight titlist Josh Warrington.

Benn prevailed via unanimous decision in a fight where Granados offered good work early before transitioning to survival mode down the stretch. It provided Benn with another quality win and the opportunity to close out the year on a high note.

“He next fight will be in December,” confirmed Hearn. “[A]n announcement on this will be made soon.”

Mike Tyson Taken To Court By Woman Claiming He Raped Her In Early 90s
Photos: Richard Riakporhe Blasts Out Krzysztof Glowacki in Four
Matias vs Ponce SHO tripleheader official for Feb. 25 at The Armory
‘When I do hurt him… I’ll finish the job’ Anthony Yarde is ready to put on show 🆚 Artur Beterbiev
Vargas vs Baez FULL FIGHT: November 6, 2021 | PBC on Showtime PPV