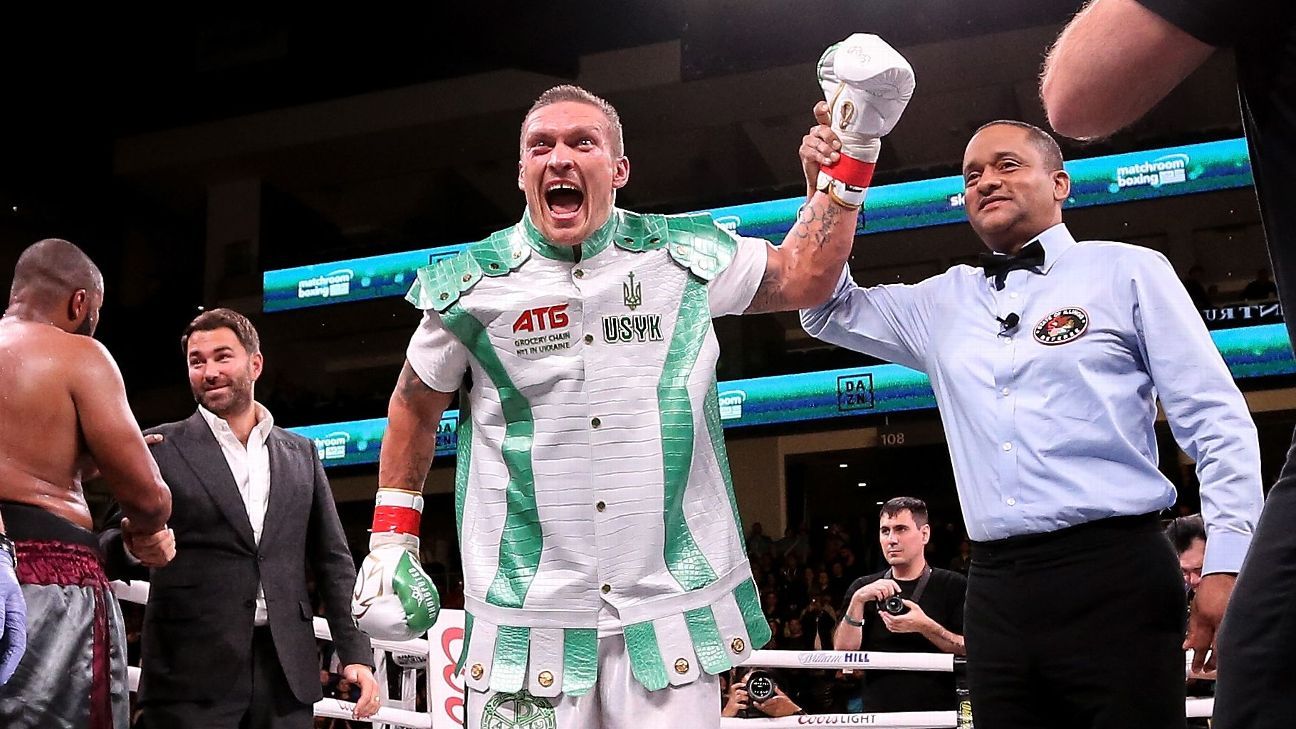 Oleksandr Usyk’s journey to his heavyweight title fight against unified champion Anthony Joshua in London on Sept. 25 has not been without success or recognition. But a victory would shine the spotlight on him like never before and invite comparisons to former champions Vitali and Wladimir Klitschko.

Usyk (18-0, 13 KOs), 34, is attempting to become Ukraine’s first world heavyweight champion since the Klitschko brothers, who dominated the division while reigning as champions from 2004 to 2015, including one period when they held all four belts between them.

Wladimir’s career ended at the age of 40 after an epic encounter with Joshua in front of 90,000 at Wembley Stadium in 2017. Usyk now has the opportunity to avenge that loss by his countryman and silence Joshua’s home crowd. About 60,000 fans are expected at Tottenham Hotspur Stadium for the fight.

After winning a gold medal at the 2012 London Olympics and then unifying all four major cruiserweight world titles in 2018 to become undisputed champion, Usyk made his move up to heavyweight in October 2019. Now, after only two fights in the division, the biggest fight of Usyk’s career has arrived and his team insists this opportunity has not come into his life as a heavyweight too soon.

Alexander Krassyuk, general director of K2 Promotions, the Ukraine-based promotional company of Vitali and Wladimir Klitschko, has helped guide Usyk’s career since he turned professional in 2013. Krassyuk is not shy about disclosing what the strategy will be against the 31-year-old Joshua (24-1, 22 KOs), a naturally bigger man.

“Boxers can just throw a punch to the chin and hope to get lucky, and they might be once out of 10, but can they do it 10 times in a row?” Krassyuk mused to ESPN. “You have to box and win each and every round to win the title. Boxing is the art of defense first and foremost, landing punches and not getting anything back. Footwork is the basis for throwing punches and defending. This is very important for any fighter, and Oleksandr is very good at this.”

Joshua weighed 240 pounds for his last fight, 40 pounds heavier than the cruiserweight limit at which Usyk was operating not so long ago. But Krassyuk said that that is in the past. His fighter is now a legit heavyweight contender.

“He has been working hard … building his body for the heavyweight division, and he’s a true heavyweight now,” Krassyuk said. “No one can say he is a cruiserweight fighting as a heavyweight like Chris Byrd was. Oleksandr is a natural heavyweight now.”

Usyk, who weighed 217 pounds for his second heavyweight fight in October, will try to move and box his way to victory rather than stand toe-to-toe with a heavier puncher. It is not an impossible task. History shows fighters from lighter divisions can conquer the best at heavyweight. David Haye and Evander Holyfield have previously succeeded in winning world titles at cruiserweight and then at heavyweight, and Roy Jones Jr. and Michael Spinks stepped up from light heavyweight to win the world title in their first fights at heavyweight.

Usyk, who made six defenses as a world cruiserweight champion, stepped up to heavyweight after his eighth-round TKO win over Joshua’s fellow Englishman Tony Bellew in November 2018.

“Fighting Joshua is my goal,” Usyk said after ending Bellew’s career. And after wins over Chazz Witherspoon in October 2019 and Derek Chisora in October 2020, Usyk gets his wish.

Avenging Wladimir Klitschko’s 11th-round defeat to Joshua would increase Usyk’s fame around the world, but he already has a big profile back home.

Krassyuk says Usyk is already a bigger star in his homeland than the brilliant Vasiliy Lomachenko, who became a world champion in just his third professional fight after winning gold medals at two Olympics. Lomachenko, a three-division world champion, is currently rebuilding his career after losing a decision to Teofimo Lopez in 2020 and has enjoyed big nights in the United States with the help of promoter Top Rank.

But Krassyuk said that at this point, Usyk is probably the most popular athlete — not just boxer — in the country.

“You can’t compare him to the Klitschkos because that was 10 years ago. It’s more about the heritage than the fame. When you have the achievement of beating Joshua, something Wladimir couldn’t do, it will be huge.”

Krassyuk noted that Wladimir is always in touch with Usyk. “They are texting, calling and exchanging information,” Krassyuk said. “Vitali might be travelling to the fight; I had a meeting with him last week, and he’s one of Usyk’s biggest fans — he has been at most of his fights.”

After winning a gold medal at the 2012 London Olympics, Usyk returned to Ukraine as a hero.

“His face was everywhere in the country on billboards,” Krassyuk said. “His fights have been televised here in Ukraine, by one of the biggest stations, and people have been able to watch his fights on TV. Lomachenko started his career in the United States, and his first three fights were not even televised here [Ukraine]. The time difference was also a factor. Oleksandr has fought in Ukraine, Russia, Europe as well as America.”

Usyk and Lomachenko are good friends, and Usyk has been described as a bigger version of the fleet-footed Lomachenko.

“If you ask Usyk who his favorite fighter is, he will say Loma,” Krassyuk said. “Lomachenko has played a big part in his career… he’s like his brother. They have been working together since 2006, 2007; they are from the same school of fighters and have the same trainer.”

Usyk lives in Kyiv with wife Yekaterina and three children (two boys and a girl) and has prepared in the Ukrainian capital with trainer Anatoly Lomachenko, Vasiliy’s father.

“Anatoly Lomachenko has been his mentor since the Olympic Games [in 2012], and he still is,” Krassyuk said. “He will be in his corner in London.”

All the pieces are in place for Usyk to overcome the challenge before him. Usyk has the skills, a talented corner and an entire country behind him on Saturday. And if he wins, he’ll have the gold and the fame — just like the Klitschkos before him.