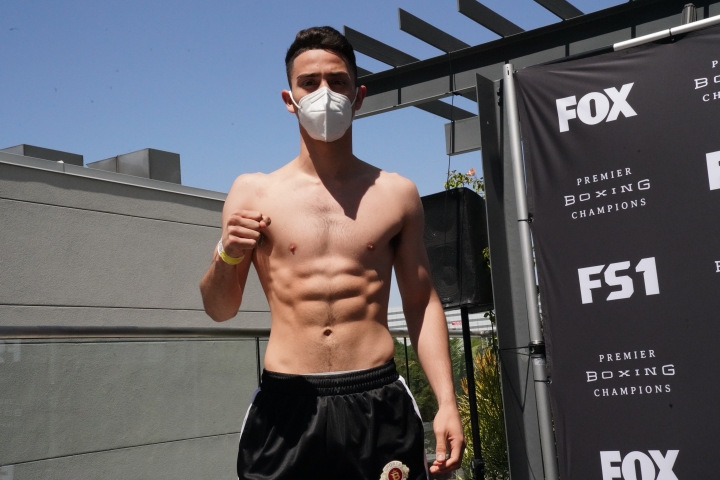 Rising lightweight prospect Jose Valenzuela will look to impress in his first main event appearance when he faces Colombia’s Deiner Berrio in a 10-round showdown that headlines FS1 PBC Fight Night and on FOX Deportes this Saturday, September 18 (7 p.m. ET/4 p.m. PT) from Mechanics Bank Arena in Bakersfield, California.

“I’ve dreamt about this moment since I was a little kid,” said Valenzuela. “Now I’m just ready to put on a show Saturday night and make a big statement. I have to let the whole division know that I’m here.”

The 22-year-old impressed in his last outing, stopping Donte Strayhorn in the fourth-round of their bout that aired on FOX prior to the Pacquiao vs. Ugas pay-per-view on August 21. While Valenzuela was pleased he was able to show off his aggressive style, he also saw facets of his game where he can improve on.

“I love putting on a good performance for the fans and getting them up out of their seats,” said Valenzuela. “I’m a very active fighter, because I grew up watching and appreciating fighters like Manny Pacquiao and Julio Cesar Chavez.

“You’re going to see better footwork from me in this fight. I’m a good boxer and I’m good on my toes, but I sometimes get bored of that. I like to fight in the trenches, but I know I have to be smart and use my defense also. I’m going to be using my jab and different angles in this fight. I’m not going to be standing straight up in front of Berrio.”

Berrio represents the most accomplished fighter who Valenzuela has faced so far in his young career. The 30-year-old Berrio has never been stopped and most recently lost a 10-round decision to unbeaten Juan Pablo Romero in April. Despite the gap in experience, Valenzuela believes he has the edge in ring IQ that will help him come out victorious.

“Berrio has a style where he fights off his back foot, gets low and then explodes with wild overhand rights,” said Valenzuela. “It’s a weird style and definitely a little awkward. I don’t think he’s going to be able to adapt and make the adjustments he’ll need against me. I’ll be expecting a lot of wide shots from him.”

A native of Los Mochis, Sinaloa, Mexico, Valenzuela now trains in Seattle, Washington, where he is trained by Jose Benavidez Sr. alongside Jose’s sons, unbeaten two-time world champion David Benavidez and longtime contender Jose Benavidez Jr. Valenzuela has worked with the Benavidez family for the last four years, soaking up the knowledge from an accomplished boxing family.

“It’s a great experience working with the Benavidez family,” said Valenzuela. “They always push me extremely hard and they really believe that we don’t have any limits. David is also a fast-paced fighter and I think that comes from the type of training we do.”

In a stacked lightweight division with numerous big-name champions and contenders, Valenzuela knows that he has to take advantage of every opportunity he receives. That knowledge is motivating him to make sure he looks impressive on September 18.

“I have to show everybody that Berrio is nowhere near my level,” said Valenzuela. “I can’t just win. I have to win in tremendous fashion. A knockout would be great, but the most important thing is to dominate and look-good winning.”

Boxing pound-for-pound rankings: Canelo loses support, even after GGG win
Video: Stevenson and Conceicao get intense during stare down
Jared Anderson: “I Would Love To Fight Daniel Dubois”
Serrano back on track, unifies 126-pound titles
Tyson Fury On Joe Joyce: “He Wouldn’t Land One Punch On Me”