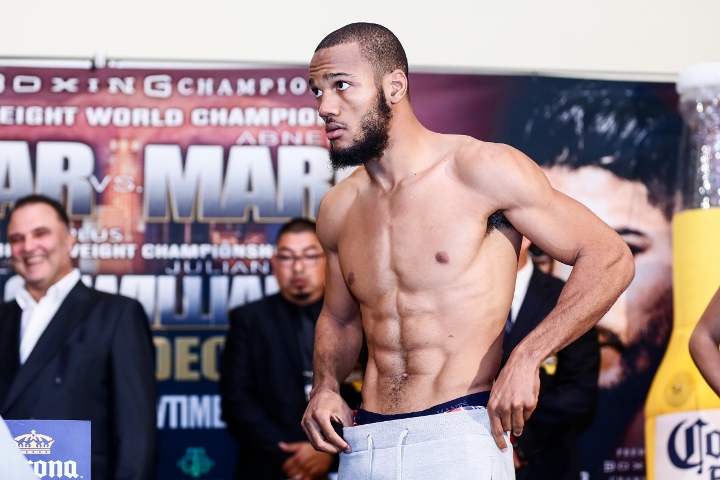 Julian Williams will encounter an opponent October 9 who pulled off an upset in his most recent fight.

BoxingScene.com has learned Williams will battle Vladimir Hernandez in a 10-round bout that’ll be part of the Tyson Fury-Deontay Wilder undercard at T-Mobile Arena in Las Vegas. Hernandez undoubtedly is an underdog against the former IBF/IBO/WBA 154-pound champion, but the Denver resident defeated favored Alfredo Angulo by unanimous decision in a 10-round super middleweight match that took place in August 2020 at Microsoft Theater in Los Angeles.

The Williams-Hernandez and Berlanga-Cocerces contests will air just before the ESPN/FOX Sports pay-per-view portion of the Fury-Wilder undercard starts at 9 p.m. EDT.

The 32-year-old Hernandez, a southpaw from Mexico, has not boxed since he upset Angulo a year ago. Though Hernandez has weighed in as a super middleweight for each of his past two fights, the 5-feet-7 veteran has competed mostly as a middleweight or junior middleweight during his 12-year pro career.

The 31-year-old Williams, meanwhile, will end an even longer layoff than Hernandez. The Philadelphia native hasn’t boxed since Jeison Rosario upset him by fifth-round technical knockout in January 2020 at Temple University’s Liacouras Center in Philadelphia.

The Dominican Republic’s Rosario (20-3-1, 14 KOs) was a 30-1 underdog entering his fight with Williams, who lost his three titles that night. Williams declined his contractual right to an immediate rematch versus Rosario in favor of surgery to repair scar tissue above both eyes.

Williams was supposed to box Brian Mendoza twice before he agreed to face Hernandez, first last December 26 in Los Angeles and again June 26 in Atlanta. Both bouts were scrapped, however, first because Williams contracted COVID-19 and again because Williams suffered an elbow injury.

Rather than rescheduling his fight with Williams again, Mendoza (19-2, 13 KOs) fought Jesus Ramos (17-0, 14 KOs), who out-boxed the Albuquerque, New Mexico, native and won a unanimous decision over him September 5 in a main event FOX televised from The Armory in Minneapolis.

Old Habits: Billy Graham, refreshed and recovered, prepares to go again
Showtime Merges With Paramount+. Will It Stop Broadcasting Boxing?
Serrano-Cruz: Two unlikely paths merge for a chance to make history
Heather Hardy Returns To Action on February 23 at Sony Hall
Broner: I had to dig myself out of dark place, now I’m ready to go