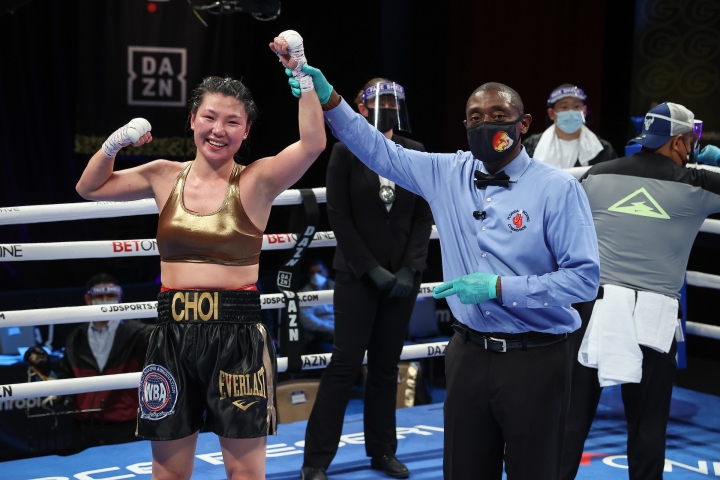 She instead settles for her first win inside the distance in nearly six years.

The difference in class was evident from the opening bell, with Choi controlling the action throughout the contest. Da Silva was less of a qualified challenger as she was someone who was available take a fight designed to keep Choi active while in pursuit of bigger opportunities. The two-division and reigning super featherweight champ—who has held a major belt since her first pro fight in 2008—used her jab to push Da Silva around the ring, often followed by straight right hands and left hooks from long range.

Da Silva was in trouble late in round four, pinned against the ropes and briefly wobbled as Choi connected with a left hook. The visiting Brazilian took the shot well, though changing her tactic and spending the next few founds playing keep away.

Choi applied steady pressure, successful in cutting off the ring. The unbeaten champ was on point with her jab throughout round six, following up with a left hook and later with a right hand straight down the middle.

Da Silva enjoyed her best round of the fight in the seventh. Most of the action took place at center ring, with the challenger at least letting her hands go and forcing the defending titlist to back up for the first time in the fight.

Choi resumed control in round eight, throwing her jab with conviction and wisely playing defense whenever Da Silva attempted to counter. Choi landed a right hand to the body late in the round, with Da Silva wincing in pain but able to remain on her feet.

It wasn’t the case for long. A right hand to the body floored Da Silva early in round nine. The challenger beat the count but found herself under attack, attempting to clinch out of trouble. Choi only briefly relented before landing the fight-ending blow, a left hook to the body which forced Da Silva to double over and take a knee. It was enough to prompt the referee to immediately halt the contest.

The 30-year-old has never left the ring without a title around her waist, a remarkable run that began with her WBA featherweight title win over Chunyan Xu in her October 2008 pro debut. Seven defenses followed before moving up in weight in 2013, where she claimed an interim title while waiting out a shot at Peru’s Kina Malpartida, who never returned to the sport following a December 2012 title defense in Kingston, Jamaica.

From there came an upgrade in title status for Choi, the longest reigning titlist in the talent-rich junior lightweight division. A distant second in terms of longevity is France’s Maiva Hamadouche (22-1, 18KOs), who has held the IBF belt since 2016 and is due to collide with unbeaten WBO titlist Mikaela Mayer (15-0, 5KOs) in a title unification clash later this year in the United States.

Choi was on course for a title unification bout of her own, as she was due to face reigning WBC/IBO champ Terri Harper (11-0-1, 6KOs) of South Yorkshire, England. The two were scheduled to meet May 15 in Manchester, England, only for the unbeaten Brit to suffered fractured bones in her right hand in a sparring session just nine days prior to the bout. Harper previously fought through a broken arm in a ninth-round stoppage of Katharina Thanderz last November, with her latest injury once again forcing surgery and subsequent physical rehabilitation.

The likely plan for Choi—who is now 18-0-1 (4KOs) in title fights, with just one non-title fight in her 13-year career—will be to revisit those plans, which will serve as a second career road trip should the fight come back into play. Choi made her U.S. debut in her previous outing, a ten-round, unanimous decision win over Calista Silgado last December at Seminole Hard Rock Hotel & Casino in Hollywood, Florida.