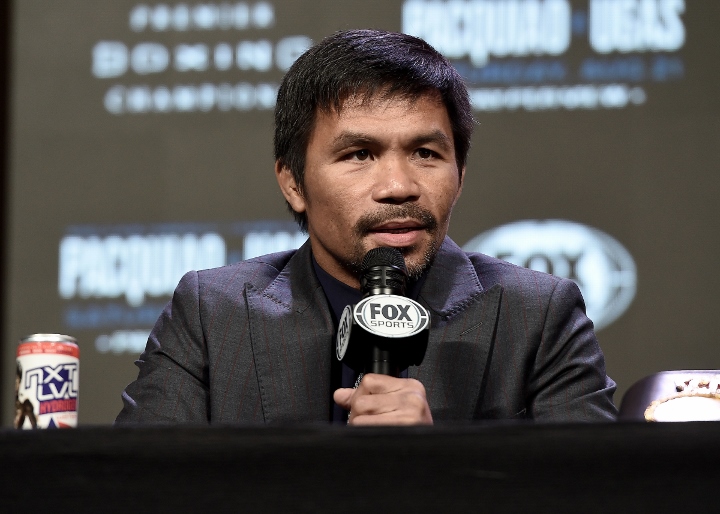 Nearly a month after suffering a surprising loss in a boxing ring, Manny Pacquiao has officially embraced a long-discussed political fight to become president of the Philippines.

Pacquiao announced Sunday that he has accepted the Partido Demokratiko Pilipino-Lakas ng Bayan (PDP-Laban) party’s nomination in his home country’s 2022 presidential election. If Pacquiao wins the election scheduled for May 9, it would essentially end his storied boxing career.

Presidential terms in the Philippines last six years. If Pacquiao were to win, his term would end when he is 49.

A law in the Philippines prevents presidents from seeking second terms.

The 42-year-old Pacquiao announced his candidacy Sunday during his party’s national assembly in Quezon City.

“I am a fighter and I will always be a fighter inside and outside the ring,” Pacquiao said. “In my whole life, I have not backed out of a fight. Because in the name of principle, the nation’s pride, I stand reaffirmed and strong.”

Pacquiao promised during his speech that corrupt government officials in his homeland should expect to serve time in prison if he is elected president. The legendary Pacquiao’s incredible rags-to-riches story is well-documented, and he is largely beloved in the Philippines.

He has given a considerable amount of time to public service in his six years as a congressman and five years as a senator. The eight-division world champion also has donated enormous amounts of money to charitable causes in the Philippines.

Pacquiao expressed during the post-fight press conference following his 12-round, unanimous-decision defeat to Cuban underdog Yordenis Ugas on August 21 at T-Mobile Arena in Las Vegas that the loss might’ve marked the final fight of his epic career. Though he still loves boxing, the compassionate Pacquiao (62-8-2, 39 KOs) admitted he is more committed to helping impoverished people in the Philippines.

“You know, as long as I live in this world,” Pacquiao said, “I want to leave a legacy, not only being a good fighter, but I want to leave a legacy as an inspiration to everybody, like I said, inside and outside the ring. I’m not talking in a politician way, but I am a public servant. I want to help people. Even my own money, I give back to the people. So, that’s my mission.

“I think, for me, material things in this world, you cannot bring that to the grave. I mean, when our lives are finished in this world, we can’t take nothing. We came to this world naked and we will depart naked. Let’s remember that. And in this sport, this is my passion. That’s why I’m here, keep on fighting at age of 42. I’m enjoying it, but you know, sometimes you have to think about the response of your body.”