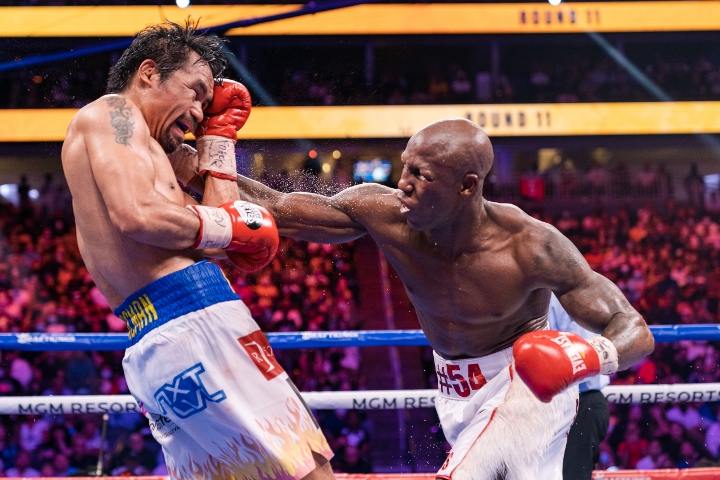 Porter won a very close, and some felt controversial, decision over Cuba’s Yordenis Ugas a few years ago.

Last month, Ugas retained his WBA welterweight title when he pulled off a big upset with a twelve round unanimous decision over eight division champion Manny Pacquiao.

Porter believes a rematch would play out differently, because he feels the Filipino superstar was not ready for the boxing style of Ugas.

The Cuban was a very late replacement for IBF, WBC champion Errol Spence, who withdrew with severe eye injury.

Pacquiao, 42-years-old, has mentioned the possibility of seeking a rematch with Ugas – but it’s more likely that he will retire from boxing after recently announcing that he plans to run in the Philippines’ presidential race in 2022.

“[Ugas’ win over Pacquiao] was impressive. It’s very difficult to be one hundred percent, but as long as you work hard you can achieve it, but he was impressive, with an excellent fight plan. He executed it, Manny was not ready for him. I’d love to see the rematch,” Porter told George Ebro.

“Yes [I think a rematch would be different]. I think in a rematch Manny would prepare better than he was. He has already seen what Ugas has. Ugas must return with something different. Manny has to use his legs. If he can’t do that, then don’t waste time talking about a rematch. If he can’t use his legs, then the result would be the same.”

Should Porter win the WBO belt from Crawford, a unification with Ugas would be possible in the future. They are both promoted by Premier Boxing Champions.