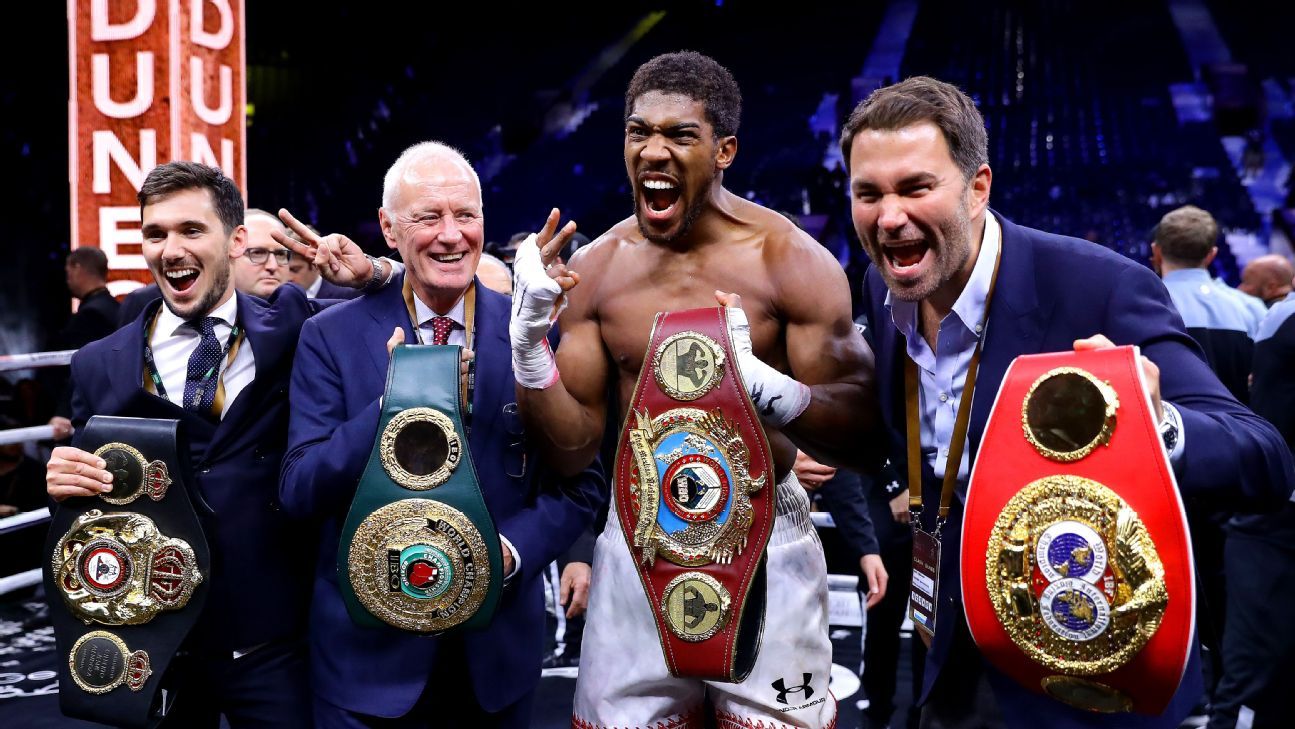 World heavyweight champion Anthony Joshua has signed a new “career-long” agreement with Eddie Hearn’s Matchroom, the promoters announced on Tuesday, although the length of the deal is undisclosed.

Joshua will put his WBA, IBF and WBO world title belts on the line when he fights Oleksandr Usyk at the Tottenham Hotspur Stadium in London on Saturday.

He signed with Matchroom after turning professional in 2013, shortly after he capped his amateur career by winning Olympic gold at London 2012.

“We’ve built some great foundations over the years and I appreciate Matchroom — the company, the team, the family business,” Joshua said in a statement.

“I’ve felt comfortable during my years as a boxer and I always felt that the business outside of sport is harder than the actual fighting due to the history and some of the problems that some fighters have had. So, to be with Matchroom Sport has been a blessing for myself, my family and my team.

“Outside of that, what Matchroom Sport have done is created an environment for boxing fans. The shows that we have managed to put on have been phenomenal. When I walk out to fight, I look around and I’m like, ‘mate, this is unbelievable.'”

No end date or length of contract regarding Joshua’s latest deal with Matchroom was detailed in the statement.

Joshua built a record of 15 knockouts in a row to take the British title in 2015. He became heavyweight world champion for the first time soon after, beating Wladimir Klitschko in 2017 to earn the WBA title in a bout later named Fight of the Year by Ring Magazine and Boxing Writers Association of America. He went on to beat Joseph Parker to secure the WBO title in March 2018.

He suffered his professional defeat in a high-profile TKO loss to Andy Ruiz in June 2019, but Joshua returned in a rematch six months later to reclaim his IBF, WBA, WBO titles and No.1 rank.

Joshua’s most recent fight was a ninth-round knockout victory over Kubrat Pulev in his mandatory IBF bout in December 2020.

Promoter Eddie Hearn said in a statement: “There is something quite special about sharing a journey together from the professional debut to the day the gloves are hung up, but it takes a huge amount of belief and unwavering loyalty. Over those 8 years, AJ has been the face of British boxing, inspiring a new generation and audience to the sport we love.

“This is the fourth and final promotional agreement we have signed together, and I am honoured that AJ has confirmed his future with Matchroom. Just like we did from the debut, myself and the great team at Matchroom will continue to work relentlessly for Anthony in the many chapters that remain.”

De La Hoya Optimistic that Tank-Garcia Will Lead to More Collaboration With PBC
When it comes to Artur Beterbiev, sparring partner Callum Simpson says: “Believe the hype”
PODCAST: Smith’s win over Eubank , Beterbiev vs Yarde preview, more
FURY to USYK “If Contract Not Signed Soon WE’RE MOVING ON!”
Anthony Yarde: I Wouldn’t Know What I’m Made of Without Losses