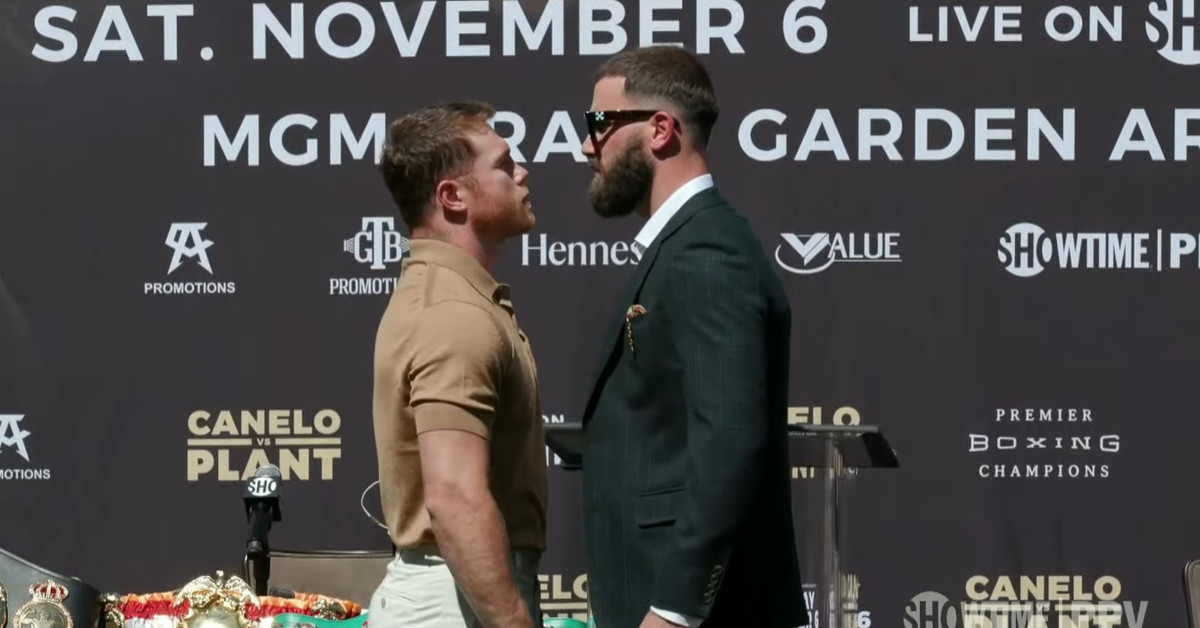 Canelo was abnormally chatty in their face-to-face to lead off the event, and while you couldn’t hear what was being said, the Mexican superstar gave Plant a hard shove that sent him backwards. Plant came back into Canelo’s face, the two threw some hands, and Plant wound up with a cut under his right eye.

After a while, things settled down and the normal actions of the press conference got underway, but Plant and Canelo did get into it again toward the end of Plant’s remarks.

“There’s only one thing better than proving people right, and that’s proving people wrong. And I’ve been doing that my whole life. … Where I’m from, there is no boxing community. There were no other pros I could look to and be, like, ‘Man, if he can do it, I can do it.’ There were no other boxers that I could look at and be, like, ‘He did steps A, B, and C, so that’s what I need to do to get it done.’ I had (my brain) and (my heart).

“I don’t do this to be famous, I don’t do this to get attention. When we first started it was just me and my dad, and we didn’t get any attention. No one believed in us, they certainly didn’t think that I’d be standing here today. I can remember when we first started, him and my grandfather scrounged up just a little bit of money to open up a little boxing gym. There was nothing but white tile on the floor. We had a ring taped off on the floor with nothing but tape, we’d spar and stand around and hold hands so people wouldn’t fall around everywhere.

“When you really want something, you don’t need all the fanciest things, you don’t need the latest technology. All you need is (your brain) and (your heart). I know a lot of you when I say I’m gonna win — ‘cause I am gonna win — that you don’t believe me. But let me explain something to y’all: All of you who tell me what I can’t do and blah blah blah, bullshit, a lot of you live believable lives and you’ve accomplished believable things. But when I set out on this, I promised myself that I was gonna run this all the way to the top, where I had no problem crashing and burning and dying on the way. I set out to live an unbelievable life and accomplish unbelievable things. I don’t need you guys to believe in me when I say what I say. Matter of fact, I want you to keep doing what you’re doing and keep not believing in me, because you’re the very reason that I’m here. I know that sounds silly to y’all.

“A lot of you boxing writers, everybody on YouTube and social media, remember what you said Jose Uzcategui was gonna do to me? You said he was gonna dog-walk me, and what happened? He got his ass dog-walked and he got set on his ass twice. So Miguel Cotto’s brother can make you do the chicken dance, but I can’t? Yeah, OK.

“You think that’s funny? Well keep laughing. Keep laughing, motherfucker. You’re gonna find out real soon. Mark my words, you bitch. (Eddy Reynoso) is a fatass bitch and you’re a bitch, what the fuck are you gonna do? And you’re a drug cheat! … You’re a cheater! You’re a cheater! You got suspended for six months. Fuck you! Fuck you. Suck my dick.”

“You’re not on my level, and you will see. You don’t want to find out, I promise you.”