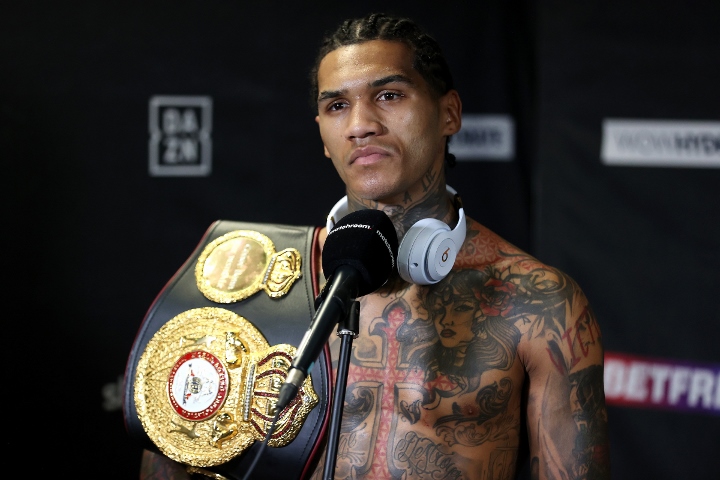 Conor Benn will be back in the ring before the end of the year.

Benn (19-0, 12 KOs) outpointed Adrian Granados at Emerald Headingley Stadium in Leeds, exclusively live on DAZN, earlier this month, on the undercard of the technical decision between Josh Warrington and Mauricio Lara in their rematch.

After remaining undefeated, the son of former world champion Nigel Benn signed a new multi-fight deal with the Essex-based outfit.

And Hearn revealed that the 24-year-old, nicknamed ‘The Destroyer’, will appear again on December 18.

Benn has been confirmed as an undercard addition to the heavyweight rematch between Joseph Parker and Derek Chisora at the AO Arena in Manchester.

A whole host of other names will be added to what Hearn calls his “banging Christmas cracker” in due course.

Meanwhile, promoter Hearn has offered an update as to what will appear as part of the supporting cast to Dillian Whyte’s return next month.

‘The Body Snatcher’ meets Otto Wallin on October 30, exclusively live on DAZN, at the O2 Arena in London and it has already been confirmed that Alen Babic, the Croatian heavyweight who is managed by Whyte, will meet former WBA ‘regular’ champion Lucas Browne on the undercard, while Chantelle Cameron will take on Mary McGee in a unification showdown for the WBC, IBF and Ring Magazine world female super-lightweight titles.

But Hearn confirmed that there will be a number of additions to the card announced in the coming days, including Johnny Fisher and Ellie Scotney.

Fisher has stopped all three of his opponents to date since turning professional, while Scotney has a pair of wins in the paid code following a successful amateur stint.

Former British light-heavyweight champion Craig Richards will return from his defeat, at the hands of Dmitry Bivol in a challenge for the WBA Super world title at 175 pounds back in May, on the card and undefeated British and Commonwealth middleweight champion Felix Cash will fight for the first time since stopping Denzel Bentley in April.

Recent Matchroom acquisition Jordan Thompson (10-0, 8 KOs) will see action for the first time since November 2019 and Youssef Khoumari, another Whyte-managed fighter who is coming off a decision win in Barcelona earlier this month, will take on once-defeated Texan Jorge David Castaneda who last time out beat previously undefeated prospect Otha Jones III.