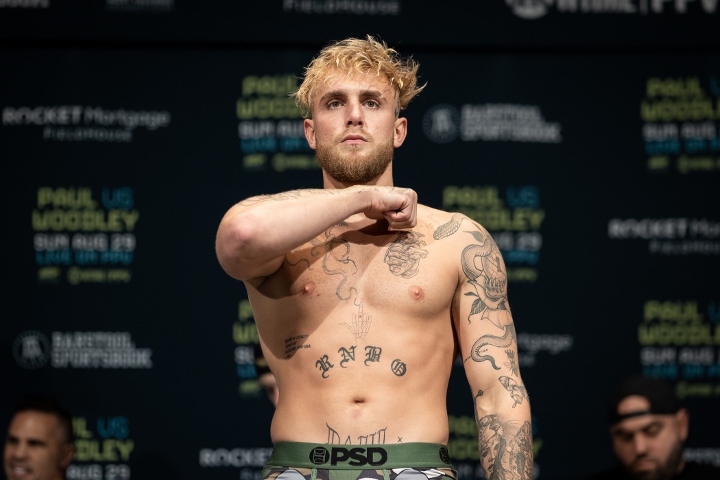 In his last two fights, Paul has defeated two of White’s former fighters.

Paul took out Ben Askren in one round in April. And he followed that up with a decision win over Tyron Woodley in August.

Masvidal had actually called for a fight with Paul in the past.

But, White would like to see Paul face a fighter closer to his size – like UFC legend Anderson Silva.

After parting ways with the UFC in 2020, Silva pursued his aspirations to be a boxer.

He picked up an upset decision win over former middleweight champion Julio Cesar Chavez Jr. in June – and then he blasted out Tito Ortiz in one round earlier this month.

White will not allow one of his top contracted stars to fight Paul on a competing outlet.

“Come on, Masvidal is 170 pounds. He likes 170 pounders. Go fight somebody your own size. Anderson Silva is not in contract, he’s 46 years old, that’s the age group you love to fight, and he’s your size, and he’s actually winning fights. If you look at Jake Paul’s history, Jake Paul either fights basketball players who have never fought, or he wants to fight washed-up older guys who haven’t fought in years,” White told the Australian Daily Telegraph.

“Anderson Silva has actually been boxing, he’s won some fights, he’s 46 years old, and he’s in your weight class. There you go, that’s a no brainer, fight Anderson Silva. You’re not gonna fight 170-pound Jorge Masvidal who’s ranked top 10 in the world. No. He fights here, he’s under contract with us. Go f—— fight somebody your own size. He just fought Tyron Woodley.

“Tyron Woodley is 40 years old, hasn’t won a fight in three years, hasn’t knocked somebody out in his weight class in five years. That’s who Jake Paul wants to fight, and he barely got out of that fight. He barely won that one. Now you want to fight a guy who’s ranked in the top 10, that weighs 170 pounds, is still relevant in the fighting world when you have Anderson who’s not under contract with anybody and has just won two boxing matches. There you go. You’re welcome. I just made your next boxing match for you, but I bet you don’t see that one happening. Wanna bet?”

Paul (4-0, 3 KOs) is attempting to make a fight with unbeaten boxer Tommy Fury (7-0, 4 KOs), who is the younger brother of WBC heavyweight champion Tyson Fury.

Rocha Knocks Out Ahsie In Seventh
“Yarde is the special one, not Beterbiev,” says Tunde Ajayi
Gary Russell Jr: “I Would Fight Isaac Cruz, I’ll Burn His Ass Up”
It’s official, Jake Paul and Tommy Fury will settle things once and for all 🥊#PaulFury
Liam Smith’s Trainer: Truly Believe Chris Underestimated Him; He’s Just A Fantastic Fighter