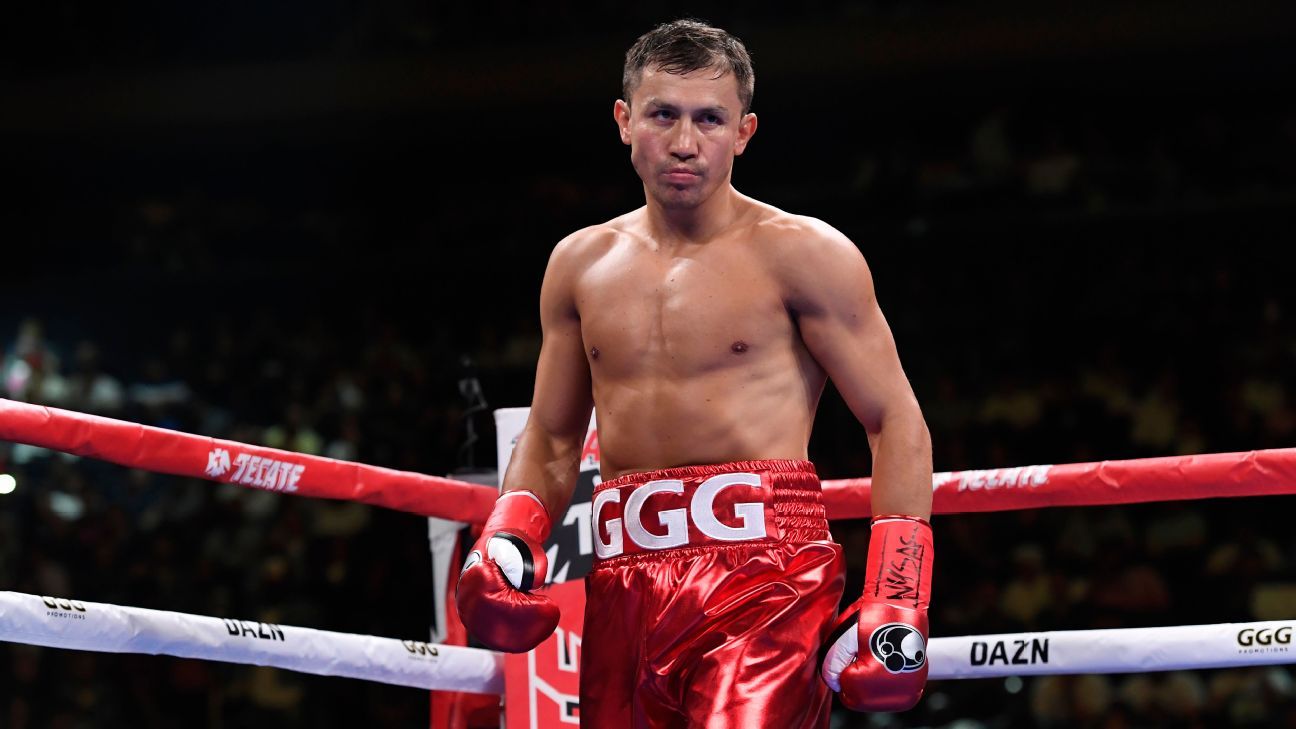 Boxing has myriad issues, but chief among them is inactivity.

That problem was exacerbated by the COVID-19 pandemic and the inability to hold fights in front of capacity crowds. But even with many of those restrictions behind us, many notable boxers have no fights officially scheduled despite not having competed at all in 2021.

Any boxer who hasn’t competed in 15 months and has no bout in the works is dropped from ESPN’s divisional rankings, and that’s exactly what happened last week to two stalwarts, Gary Russell Jr. and Keith Thurman.

Beyond that group of inactives, there are many others who competed in the first half of 2021 and still have no concrete plans for the second half of the year.

We’ll try to sort out what lies ahead for some of the big names missing from the spotlight.

Where’s GGG and what could be next?

Gennady Golovkin was once among the biggest stars in boxing, a menacing puncher whose catchphrases endeared him to fans. But inactivity is the great momentum killer. And not just inactivity, but lack of big-time fights since he was narrowly defeated by Canelo Alvarez in their September 2018 rematch.

Since signing an exclusive deal with DAZN in 2018, he’s competed just three times. His bout with Sergiy Dervyanchenko wasn’t anticipated, yet ended up being one of the best action fights of 2019. Since that October scrap, GGG has fought only once, a stay-busy bout against Kamil Szeremeta in December 2020.

The long layoff could end soon, though. Golovkin is slated to fight Ryota Murata in a middleweight championship unification bout on Dec. 28 in Kobe, Japan, sources tell ESPN. Both sides agreed to the deal and are simply waiting for DAZN to sign off on the bout.

That’s a big reason why GGG has been so inactive: a dispute with the streaming service. After Alvarez sued DAZN last year, GGG became embroiled in a battle with the platform connected to its expectation that Alvarez and Golovkin would fight a third time.

While Golovkin-Murata isn’t a major fight — and a far cry from Canelo-GGG 3 — it is compelling. GGG, who turns 40 in April, was pushed to the brink against Derevyanchenko. It’s hard to know just how much he has left. Murata, a plodding fighter, is a superstar in Japan and an Olympic gold medalist but has proven to be below the top level in the pros. GGG is ESPN’s No. 2 160 pounder while Murata is No. 4. The winner will be primed for a big fight in 2022.

And speaking of inactivity, this will be Murata’s first fight since a fifth-round TKO of Steven Butler in December 2019.

Where’s Andy Ruiz Jr. and what could be next?

Ruiz outpointed Chris Arreola in May in a tougher-than-expected fight, Ruiz’s first bout since his loss to Anthony Joshua in the December 2019 rematch. Then in August, Ruiz had arthroscopic surgery on his right knee in Guadalajara, Mexico.

The plan, sources said, is for the heavyweight contender to return for the end of the year. Two potential opponents: Luis Ortiz and Charles Martin. Martin is a former heavyweight titleholder, but a fight with Ortiz is far more compelling.

The 42-year-old Cuban has big pop in both hands and showed off his boxing ability in two losses to Deontay Wilder. Ortiz was ahead on the cards in both fights before being knocked out. Ortiz was ringside in May to scout Ruiz, and with both fighters aligned with PBC, it makes a lot of sense. Ruiz is rated No. 5 at heavyweight by ESPN, while Ortiz is No. 10. Martin is a fringe contender who would be installed as a sizable underdog vs. Ruiz.

Where’s Keith Thurman and what could be next?

Thurman hasn’t competed since July 2019, when he narrowly lost his welterweight title to Manny Pacquiao. A source told ESPN that PBC was exploring a rematch between Thurman and Shawn Porter — a fight Thurman won in 2016 — but that was before Porter was installed as the mandatory challenger to Terence Crawford. Crawford and Porter meet on Nov. 20.

In the meantime, Thurman has nothing planned, per sources. He was dropped from the ESPN welterweight rankings last week due to inactivity and desperately needs a fight to stay relevant. When he was active, he was a force to reckoned with — a smooth boxer-puncher with good size for the division.

A fight between Vergil Ortiz and Thurman would be enticing, and the best fight you could make for Thurman at the moment when you consider who’s available. But there’s almost zero chance that happens; Ortiz is with Golden Boy and Thurman with PBC.

A Thurman-Jamal James bout is viable and would be a good test for the 32-year-old coming off the long layoff, as is a rematch with Josesito Lopez, who surprisingly gave Thurman a scare in January 2019.

Where’s Gary Russell Jr. and what could be next?

Remind me if you’ve heard this before: Gary Russell Jr. doesn’t have a fight lined up and hasn’t competed this year.

The last year Russell fought more than once? 2014. Starting in 2015, he’s fought every year, once a year. But so far, he hasn’t competed in 2021. There was talk of him fighting Rey Vargas in the spring, but that never materialized.

Despite the inactivity, there’s no doubting Russell’s immense talent. His only loss came in 2014 to Vasiliy Lomachenko. Since then, he’s been dominant, with wins over Joseph Diaz Jr. and, most recently, Tugstsogt Nyambayar.

On Tuesday, the WBC ordered Russell to defend his 126-pound title against Mark Magsayo. The undefeated 26-year-old Magsayo is coming off the biggest win of his career, a brutal KO of Julio Ceja in August, on the undercard of his promoter Manny Pacquiao’s loss to Yordenis Ugas. Magsayo, of the Philippines, was dropped in the fifth round but rallied for the win. And with his aggressive, come-forward style, a fight with Russell is a fascinating matchup.

PBC, which handles both Russell and Magsayo, hopes to finalize the fight before the end of the year. Russell, formerly ESPN’s No. 1 featherweight, was dropped from the rankings due to inactivity.

De La Hoya Optimistic that Tank-Garcia Will Lead to More Collaboration With PBC
Artur Beterbiev vs. Anthony Yarde – CompuBox Punch Stats
Puerto Rican Olympian Rivera signs with Matchroom, set for Serrano-Cruz undercard
The Beltline: Just as boxers must do better, we must know not to expect perfection
Ennis vs Dulorme FULL FIGHT: October 30, 2021 | PBC on Showtime