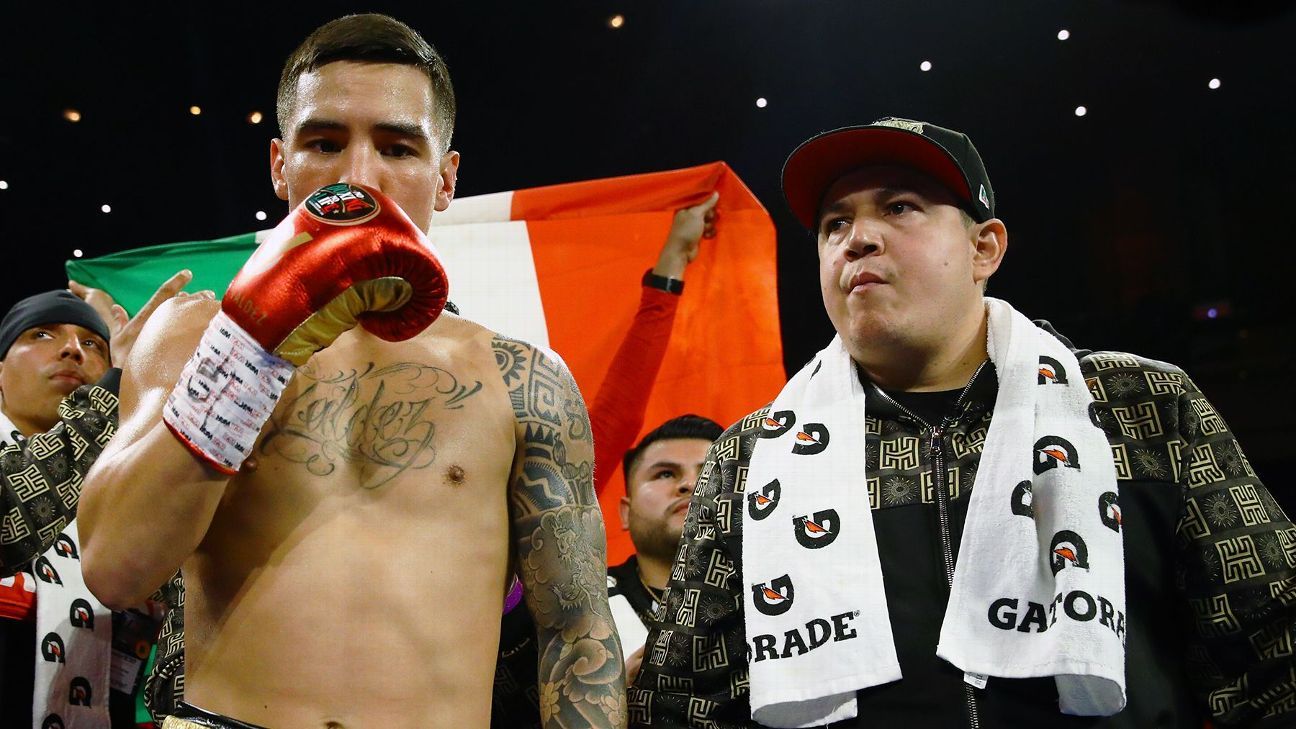 Oscar Valdez wasn’t the only person to be scrutinized by the boxing world after he tested positive for the banned substance phentermine ahead of his victory over Robson Conceicao earlier this month.

His trainer, Mexico’s Eddy Reynoso, was dragged into the controversy, and had his reputation called into question by champions like Devin Haney, Caleb Plant and Sunny Edwards on Twitter.

“All of them are suspect, everything out of that camp is intentional,” wrote Plant, who continued the barrage at Tuesday’s explosive press conference in Beverly Hills, California, to promote his Nov. 6 undisputed super middleweight championship fight with Canelo Alvarez (trained by Reynoso since the amateurs), accusing both of cheating.

Reynoso, 44, told ESPN in Spanish last week through a translator that the wave of criticism has caused him to think twice about which fighters he trains going forward and to even consider having his boxers sign waivers stating “that I’m not their nutritionist, I don’t give medical advice. I’m the trainer, I teach technique and that’s it.”

“I’ve been training for 20 years and in this time I’ve trained 15 world champions and my job is just to train them,” Reynoso said. ” … These people like Caleb Plant don’t know anything about my career, my accomplishments, everything I’ve done in my role with these fighters. This is something they’re ignorant about and trying to tarnish everything I’ve worked for.”

Alvarez, ESPN’s No. 1 pound-for-pound boxer, tested positive for the banned substance clenbuterol ahead of his 2018 rematch with Gennadiy Golovkin and was suspended six months, postponing the bout. He said the positive test was the result of tainted meat consumed in his native Guadalajara, Mexico.

The claim wasn’t outrageous. NFL all-pro tackle Duane Brown tested positive for clenbuterol in 2015 and had his 10-game suspension overturned the following year after the league believed the NFLPA proved the substance came from tainted meat eaten in Mexico.

That led to a warning from the NFL to its players that consumption of too much meat in Mexico and China could lead to a positive test for the banned substance.

Three years later, Valdez’s positive result (which he blamed on herbal tea he consumes) brought the controversy back to the surface.

“I feel disappointed that I’m being criticized,” Reynoso said. “I’m the trainer. I teach boxing, I teach technique, I prepare the fighters to fight. That’s my role. Unfortunately, there are some people in the press that are trying to take me down and attacking me for something I’m not responsible for. Haters.

Valdez has blamed his test failure on the appearance of phentermine in the herbal tea he consumed.

“So far, I’ve been having a great year in terms of my career and I’ve been taking a lot of criticism here and I don’t think it’s justified because I’m the trainer and I had nothing to do with this,” Reynoso said. “I feel like I have to come out and defend myself.”

Indeed, Reynoso is in the running to repeat as trainer of the year. Alvarez scored a third-round KO of journeyman Avni Yildirim in February before unifying titles with a orbital-shattering TKO of Billy Joe Saunders in May.

Garcia delivered a career-best performance in January, a knockout of Olympic gold medalist Luke Campbell. Martinez successfully defended his title in June with a stoppage victory over Joel Cordova, and Valdez brutally knocked out Miguel Berchelt in February to win a 130-pound title.

Yet Valdez’s positive test for the stimulant last month called it all into question for many in the boxing industry. That Valdez was allowed to fight despite the positive result seemed to make the criticism even louder.

“With fighters that I am fully in charge of like Saul (Alvarez), and some other fighters in the past, something like this wouldn’t happen,” Reynoso said when asked if he thought Valdez should be allowed to fight. “It wouldn’t get to this point. I just don’t think we would be in this situation with a fighter that I’m 100 percent in charge with.

“When [the WBC] say they’ll allow the fight to go forward, me as the trainer, I need to go forward with the fight. … If I was his manager, maybe things would have been different than they were today.”

Reynoso also took issue with criticism from ESPN’s Timothy Bradley and Andre Ward for not attending the fighters’ meeting to address the issue. The trainer said he wanted to wait until after the fight to conduct an interview because he didn’t want to create more distraction for Valdez (and also that he wasn’t aware of the meeting.)

“It does hurt,” he said. “It hurt because these are not things that were within my reach to be responsible for. … What’s taken me to the world level of champions is the discipline I teach, the boxing technique I teach; it’s the responsibility I instill in fighters. That’s what I do. My fighters don’t come in overweight, my fighters don’t give low blows, my fighters don’t do things they shouldn’t be doing. I became trainer of the year for those things and nothing else.”