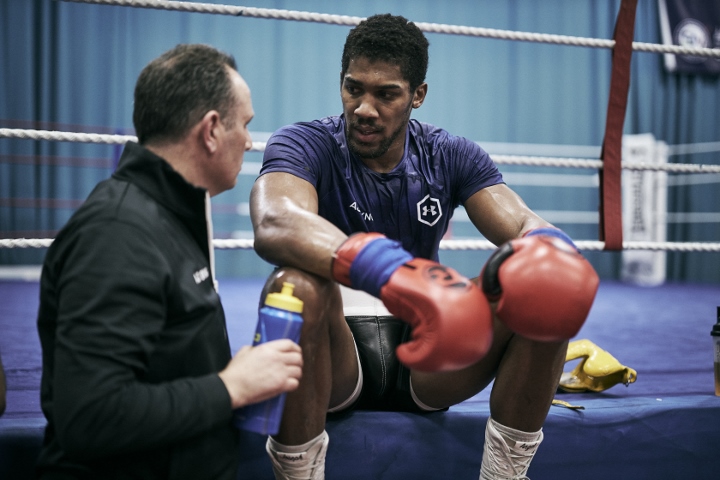 Anthony Joshua must control the space and not leave himself open to counterpunches if he is to successfully defend his heavyweight titles against Oleksandr Usyk on Saturday night, according to his trainer, Robert McCracken.

“Usyk is smaller, he’s quicker, he’s a southpaw so if you leave something out there, he is going to counter you,” McCracken said. “He’s very good with his counter, you have to set everything up. You got to control the space you’re in all the time. Whatever space he is – whether it is this big or that big – you have to control it. Josh has got good feet for heavyweight and he is mobile. With that reach, the way he sets things up, he’s formidable.”

Joshua is written off as some critics as robotic, but he has proved pretty formidable, using his size, reach and power to great effect. And while Joshua has worked hard on improving his technique and handspeed, he should not forget the things that have made him successful.

“He has got to use his main attributes, which are a really good jab, good reach, good right hand, good balance, side to side movement and he has to use his physicality up close too,” McCracken said. “Josh is very good on the inside, he is effective at close range as well as long range. He has to stay in that rhythm and do what he does.

“He has already achieved a lot in the sport, he has beaten numerous world class operators. He has to show his experience. He has got good experience at the top level and he has to dictate.”

Joshua has a three-inch height advantage and a four-inch reach advantage over Usyk, as well as a 19lb weight advantage. The Ukrainian, who won an Olympic gold medal at heavyweight at the London Olympics the night before Joshua won super-heavyweight gold – is the first southpaw Joshua has faced since winning the IBF title from Charles Martin in 2016.

McCracken was away from Joshua’s training camp for more than three weeks during the Tokyo Olympics in his other role as Great Britain’s performance director, but he says that did not interrupt Joshua’s preparation.

“He has been boxing southpaws for the best part of four months,” McCracken said. “It’s another challenge, but he has boxed southpaws before and he is heavyweight champion of the world, you are going to be facing good opponents all the time at this level. Usyk is obviously a very good fighter and very skilled. He has got plenty about him and he is the best contender out there.

Joshua still trains alongside the GB squad and stands out as an inspiration to the teams that have followed him since he won gold at the London Olympics in 2012.

“I’ve been at GB 12 years now, done three Olympics. It’s been tough but it’s been rewarding. It’s been a nice experience to be honest.

“With big Josh, he showed up in October 2010 and he was different to other boxers. He trains with them now but I say that to them [amateurs] all the time. He was very different, he was keen to get on with things and go to the European Championships as soon as he could. When wasn’t going to the Commonwealth Games, he wanted to know why not. Basically, his mindset was what stood out for him.

“He’s formidable and very powerful, he can box, he’s got a good jab and he is really good on the inside. His record speaks for itself, you don’t beat all these guys he has unless you’re very good.”