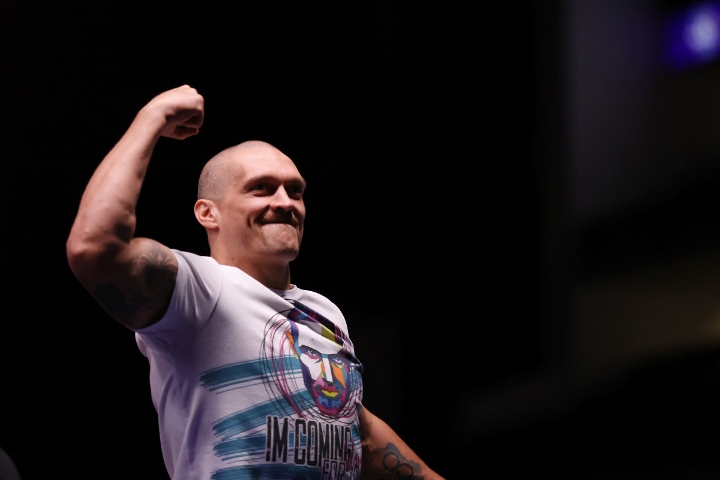 Alexander Krassyuk heaped praise upon Anthony Joshua throughout his speech at their press conference Thursday afternoon in London.

As he wrapped up his comments, Krassyuk matter-of-factly informed them that they also should expect to share a dais with Usyk again before Joshua’s next fight. Joshua has said he has an immediate rematch clause in his contract, which Krassyuk predicted he will need to exercise when Usyk upsets him Saturday night at Tottenham Hotspur Stadium in London.

The undefeated Usyk is slightly less than a 3-1 underdog against Joshua, according to most online sports books. Krassyuk assured Joshua, though, that he will face the best opponent of his eight-year pro career when he encounters his fellow 2012 Olympic gold medalist.

“Every ambitious fighter is chasing for glory, is chasing for recognition, for success, for fame,” Krassyuk said. “And there’s only one way to get all of those things. It’s to fight the best fighters. And AJ is the best. He is the king of the division. But if you wanna become a king yourself, you have to dethrone the king. So, let this fight happen, let the best man win and we’ll see you again for the rematch.”

The 34-year-old Usyk is 2-0 in heavyweight fights since the former undisputed cruiserweight champion relinquished his IBF, WBA, WBC and WBO belts in that division.

The Kiev native stopped Philadelphia’s Chazz Witherspoon (38-4, 29 KOs) after the seventh round of their October 2019 fight at DePaul University’s Wintrust Arena in Chicago. In his most recent appearance, Usyk unanimously out-pointed veteran heavyweight contender Dereck Chisora (32-11, 23 KOs) in a 12-round fight that took place last October 31 at Wembley Arena in London.

Joshua stopped another mandatory challenger, Bulgaria’s Kubrat Pulev, in his last fight. The Watford, England, native dropped Pulev (28-2, 14 KOs) once in the third round and twice during the ninth round on his way to a ninth-round, technical-knockout victory December 12 at Wembley Arena.

The Joshua-Usyk clash will be the main event of a Sky Sports Box Office pay-per-view show in the United Kingdom and Ireland (6 p.m. BST; £24.95). It also will headline DAZN’s stream in the United States (1 p.m. EDT) and more than 170 additional countries and territories.