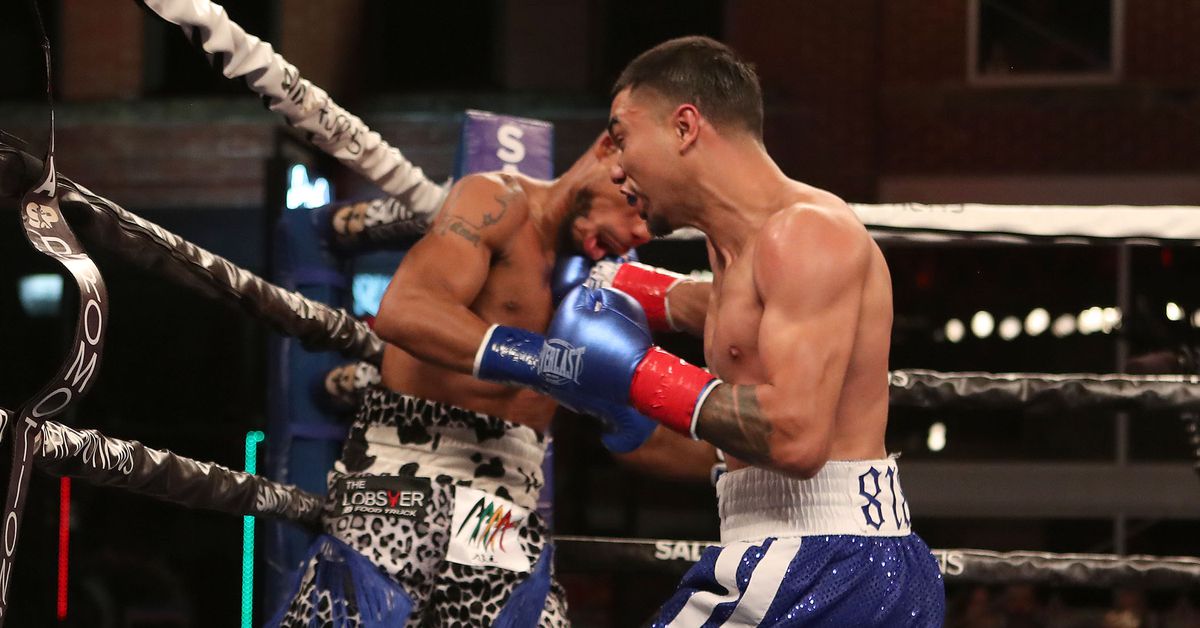 The good people of Broken Arrow, Oklahoma didn’t get to see Saul Sanchez and Ja’Rico O’Quinn fight for very long. It was certainly a lot of fun for the one minute and fifty eight seconds that it lasted.

He certainly didn’t get it, as Sanchez scored a staggering knockdown 1 minute in on a beautiful counter left hook. O’Quinn rose on unsteady legs, but seemed to have composed himself right around the time Sanchez dropped him again just 45 seconds later on a straight right to the temple.

O’Quinn got up again. But, less than 15 seconds later, Sanchez had him on the ropes, pummeling O’Quinn’s skull with both hands until the referee stepped in and stopped things after less than two minutes.

If you missed it live and you have a minute to spare, enjoy a three knockdown real-time highlight reel!

Not much to say here, as every round was largely the same story: Jayvon Garnett stayed outside and threw sparingly, and Luis Nunez (12-0, 8 KO) did just enough to clearly win rounds without actually injecting any excitement into the matchup.

Credit to Garnett’s (10-1, 5 KO) strengths, as he was good enough at defense and managing distance to effectively strangle the life out of the fight and kill what was a pretty amped up crowd after a much more exciting opener.

Garnett fought early as though he was contractually prohibited from throwing more than one punch at a time, and didn’t really shift out of that gear until the fifth round. Even then, Nunez did more, better, cleaner, round after round.

Nunez looked capable if not exactly thrilling in his first fight outside of the Dominican Republic. He swept all three cards, 100-90.

This was Otar Eranosyan’s 6th fight of the year, and his 10th in just 13 months as a professional. But he put on a show like a seasoned pro, moving well from head to feet, and landing crisply throughout.

Alejandro Guerrero (12-2, 9 KO) came out throwing fast and hard, but Eranosyan (10-0, 6 KO) handled it well and landed strong punches through it.

Both men made strong claims on the early rounds, with the round score seeming to swing back and forth every 30 seconds. But, Eranosyan landed cleaner and more consistently. Every time Guerrero started building momentum, Eranosyan landed an eye-catching punch.

The fight tilted more and more clearly towards Eranosyan as the rounds went on, and Eranosyan started pushing harder and fighting with the initiative in rounds 6 and 7. By the 8th and final, Eranosyan was dancing, taunting, and working a very game Oklahoma crowd.

Other than a moment of ugliness in Round 7 where he rammed his shoulder into Eranosyan’s jaw on a clinch, Guerrero put on a great show and never stopped pushing aggressively. Judges scored it unanimously for Eranosyan on two cards of 78-74 and one 79-73. I had it a clean sweep for Eranosyan, but the fight was much more even and enjoyable than those cards would suggest.