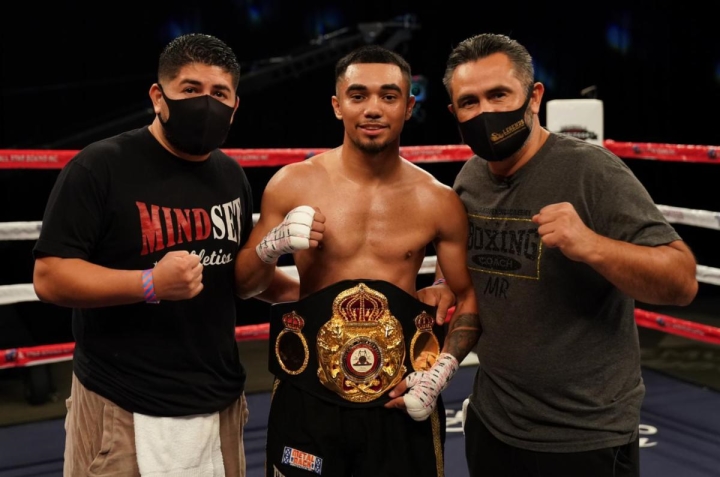 Bantamweight Saul Sanchez has been able to bounce back from a setback earlier in his career. A win over an unbeaten prospect could lead him down toward contender status in a very competitive division.

In his last bout on March 19, Sanchez dropped Frank Gonzales three times before the fight was stopped in the opening round. He has now won his last four bouts since suffering the only loss of his career at the hands of Edwin Rodriguez in August 2019.

Sanchez, who resides in the Los Angeles suburb of Pacoima, will be making his second appearance on the popular ShoBox series. In his first fight, which took place three months before the Rodriguez fight, Sanchez overcame a strong challenge from Brandon Leon Benitez before stopping him in round 8.

The 24-year-old is grateful to receive another opportunity to fight in a televised bout, one where he is in the main event.

“I’m very grateful to my promoter Thompson Boxing for getting me this fight on Showtime,” said Sanchez earlier this week from training camp. “It’s been a long time coming for me to get on this stage and I’m going to take full advantage of this opportunity. A lot of champions fought on ShoBox and I want to be the next fighter to follow behind them and win a world title.”

O’Quinn (14-0-1, 10 KOs), who resides in Detroit, Michigan, has now fought since January 2020, defeating Oscar Vasquez by unanimous decision. Tonight will be the third appearance on ShoBox for O’Quinn.

Tonight marks a big fight for the two fighters as the winner takes a major step forward towards contender status. Both believe recent setbacks will not play any significant role during the fight.

Despite the lone loss, Sanchez believes he has overcome more and is the more-complete fighter between the two.

“Like me, O’Quinn is coming off an impressive win against a fighter with a good record,” said Sanchez, who made his pro debut in February 2016. Although he hasn’t fought since (January) 2020, I know he’s been training hard like all fighters during the pandemic. He’s had a lot of time to prepare for this fight and I know he’s hungry, like me. Someone is going to take a step backwards (after this fight), and it isn’t going to be me.”

After a stint with Joel Diaz, Sanchez is back with trainer Manny Robles, whom he began his pro career with. Sanchez believes his defense needed to improve, prompting the move back to Robles.

“My trainers Manny Robles and Edgar Jasso have been pushing me hard. A lot of tough sparring, a lot of working on fundamentals, and fine tuning, is what we’ve been working on. My body feels great and I’m going to give the fans a great fight. I’ll be all-action come this Friday.”

“Winning this fight will get me one step closer to getting a world title shot. The time is now for me to perform at my very best. In addition, a victory will get me to bigger paydays. I want to be a fighter that everyone wants to see, so I must win, and win impressively.”

Francisco A. Salazar has written for BoxingScene since September 2012 and has covered boxing in Southern California and abroad since 2000. Francisco also covers boxing for the Ventura County (California) Star newspaper. He can be reached by email at santio89@yahoo.com or on Twitter at FSalazarBoxing

Editor’s Letter: It’s likely to be a long road back for Chris Eubank Jnr
Yesterday’s Heroes: Among London’s small hall venues, Dagenham’s Roundhouse always hit the right note
AWKWARD! Artur Beterbiev BITES BACK at question ‘YOU WANT TO BE ANGRY WITH US?!’ | #shorts
Oleksandr Usyk To Tyson Fury: “I’m Ready To Box You Even Without Any Prize Money!”
It’s Official: Caleb Plant To Face David Benavidez March 25th