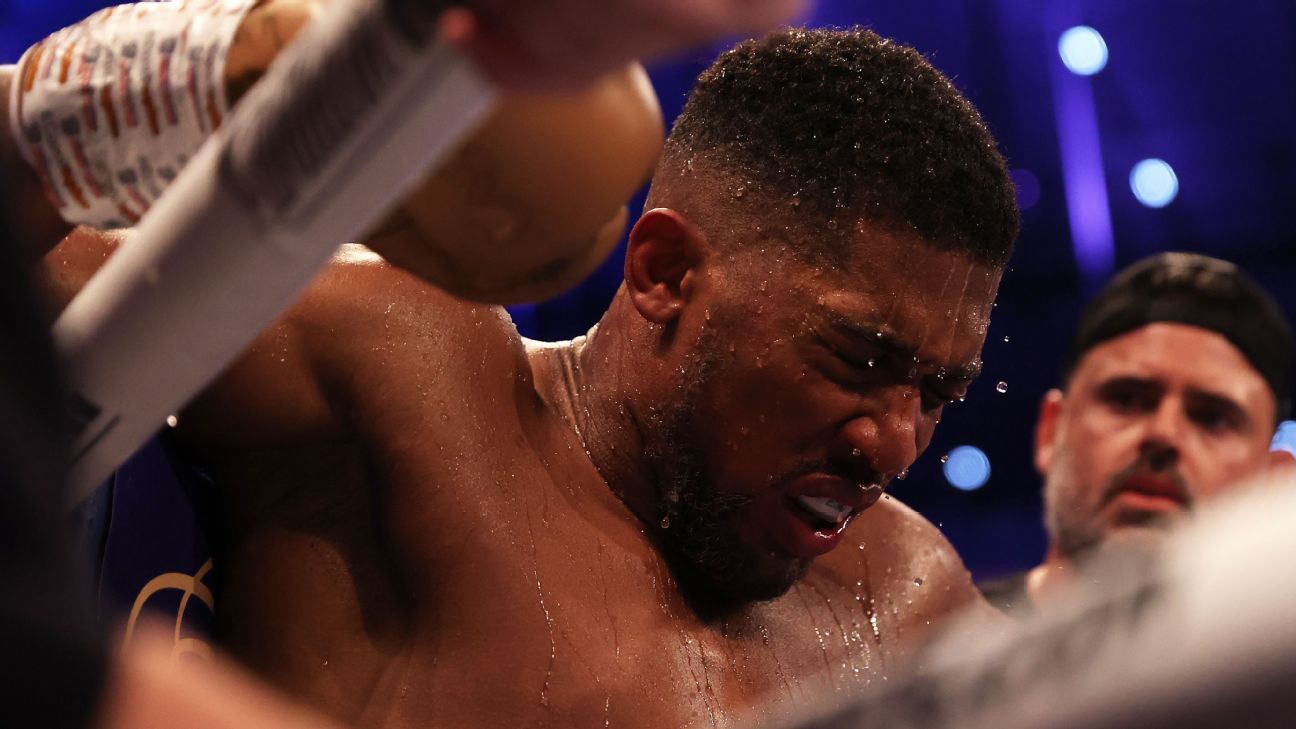 Oleksandyr Usyk didn’t just rip up the script, he set fire to it and then threw it in the face of the heavyweight division.

The 66,267 pairs of eyes in Tottenham Hotspur Stadium, north London, could have been forgiven for not believing what they were seeing. Usyk threw shot after shot at Anthony Joshua, the hometown hero and WBA, IBF and WBO world heavyweight champion. After 12 long, bruising rounds, Joshua sat on the edge of the canvas, his belts gone after a unanimous points defeat to Usyk and a unification fight against fellow British fighter Tyson Fury kicked to the kerb once again.

Joshua looked so calm walking into the Tottenham Hotspur Stadium – this was his home turf. But an hour later there were only a few boos as the scores, all in favour of the new heavyweight champion of the world, were read out. There will be some post-mortem into this fight but the basic reality is Joshua was out-thought and out-boxed on what was supposed to be a glorious homecoming.

All week, Joshua had promised to deliver. The packed Tottenham Hotspur Stadium expected as much. They came to see the Joshua show, expecting him to roll back the years to those pre-pandemic days when he floored Alexsandr Povetkin in front of 90,000 at Wembley. That was three years ago this week. Since then Joshua has been to New York for what they put down as a momentary blip against Andy Ruiz Jr, and then he got the Joshua show back on track in Saudi Arabia in the rematch and kept it rolling in front of just 1,000 socially distanced fans at Wembley Arena against Kubrat Pulev last December.

So when this fight came around, neither fighter had to sell it, literally (it sold out in 24 hours) or figuratively. It had the star power of Joshua back in front of a packed UK stadium, against the undefeated Ukrainian Usyk. Joshua treaded the boards in the stadium like it was his own. This part of London was where he used to go for nights out back in his amateur days. Joshua and a few mates used to frequent the Opera House nightclub – if they got in a fight, they’d usually win (they even had their old coach on the door to help them out). But time is merciless; that nightclub is now student accommodation and though Joshua spent much of lockdown expanding his knowledge of the sport, this was a brutal lesson.

Joshua said he loved the anonymity of lockdown, but his standing means he is hardly inconspicuous. He has been at the forefront of British sport for nearly a decade – a run similar to compatriots Lewis Hamilton or Sir Andy Murray. For so long he had that cloak of invincibility but that’s a long lost memory. Usyk reduced him to just another statistic as he secured his own 19th straight victory and remained undefeated. This was a monumental win for Usyk in a stadium overwhelmingly in favour of Joshua.

The pre-fight atmosphere was like that Wembley evening three years ago. The songs were the same; the crowd danced to the same tunes and responded to the same musical triggers. Those beats of the White Stripes’ Seven Nation Army are the catalyst for the Anthony Joshua chants, while the customary ring walk invites unbridled Joshua acclaim.

It all felt so familiar. Perhaps even too familiar. Soon came the realisation that this wasn’t going to be a night that followed the usual cues. By the third round, many observers’ scorecards had Joshua three rounds down, and he had been rocked hard by Usyk, too. That famous Joshua right-hand wasn’t as locked and loaded as it normally was. The expected knockout, the turnaround in fortunes that would bring the crowd back roaring simply wasn’t materialising.

The excitement dissolved into nervousness, with reactionary singing in response to the disparate pockets of support for Usyk. The crowd swayed with the punches Joshua threw, but then winced and drew breath as the sweat and blood sprayed off Joshua’s head as Usyk went about his slippery, elusive, brilliant plan.

On a night where the atmosphere was claustrophobic, and reverberated through your chest, Usyk had the rare gift of bringing silence on this packed stadium. First through the punches he landed, but then the scorecard he owned. Once everything had gone in favour of Usyk, the once orderly procession had descended into the unknown. While Joshua was left standing as his belts were passed over to Usyk, there was disorder. Promoters, broadcasters, boxers, devotees suddenly realised that all best-laid plans were in tatters. And the crowd departed into the dark, lifeless night wondering exactly what had happened. Worse still, many would be realising that it could be many months before they would be back for what was supposed to come next: Joshua-Fury, the two British heavyweights fighting for all the titles in the world.

There will now be those awkward questions for Joshua’s camp. He signed his career-long deal with Eddie Hearn’s Matchroom earlier this week. He will fight again – likely in a rematch with Usyk, but there is a sense that tonight robbed the UK of the heavyweight match up which has been talked about for so many years. Joshua walked out to Robert Tepper’s No Easy Way Out, the theme for Rocky IV. It proved to be a horrible premonition. This wasn’t a homecoming for Joshua. It was a reminder that — though it all felt the same as it did three years ago — everything’s different now.

Highlights and results: Saracho upsets Francis in ProBox TV’s first Wednesday night show
Liam Smith on KO of Eubank: I Told You All Week, Don’t Be Surprised!
Oleksandr Usyk To Tyson Fury: “I’m Ready To Box You Even Without Any Prize Money!”
Bradley: An open letter to Beterbiev and Yarde — with a game plan for each
Dillian Whyte Wants Both Boxing, MMA Fight With Francis Ngannou: ‘I Would Bash Him’