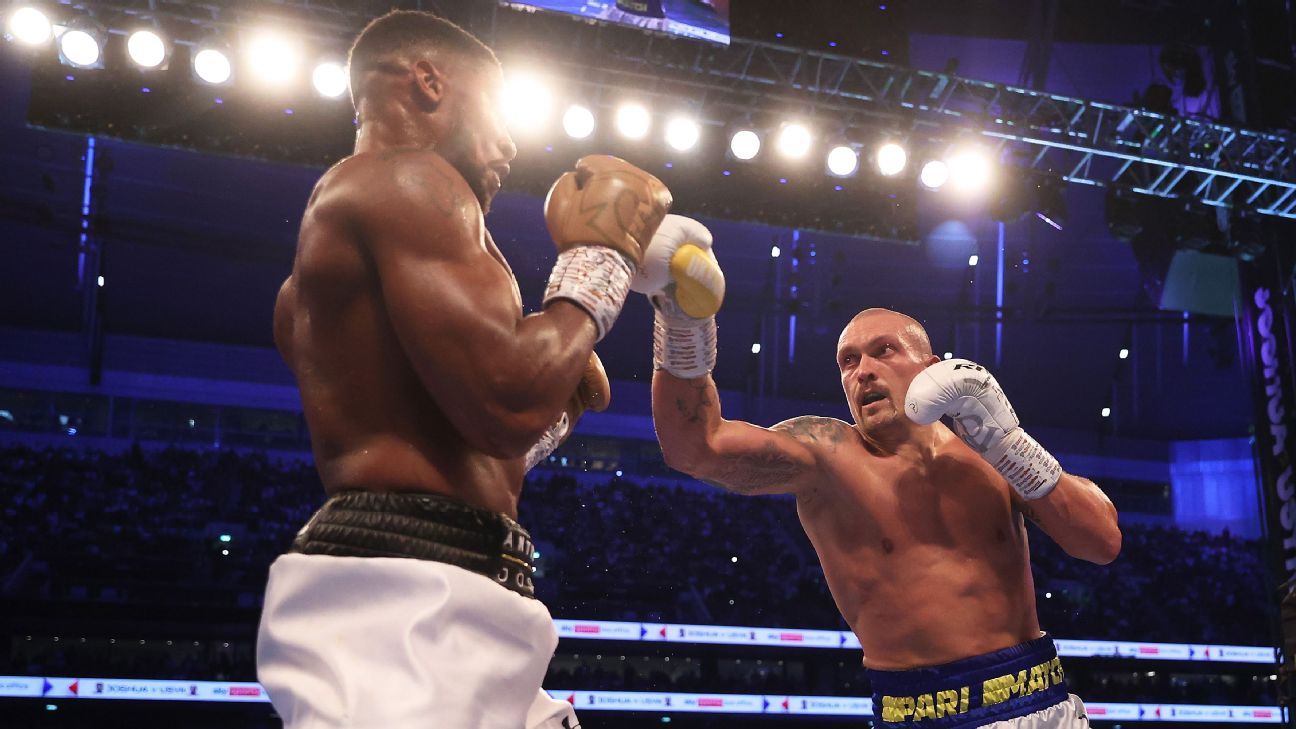 After all of the talk about a fight between Tyson Fury and Anthony Joshua, you can kiss it goodbye. Even if the bout eventually happens, it will never be the mega fight it should have been.

Not after Oleksandr Usyk dominated Joshua on Saturday to win the unified heavyweight championship — handing AJ his second career loss with a brilliant performance inside of London’s Tottenham Stadium in front of more than 66,000 fans. Not after Usyk seemed to be on the brink of stopping Joshua at the end of the fight, which he could have if Joshua wasn’t saved by the final bell.

This was a star-making performance for the Ukrainian. The 34-year-old Usyk answered any and all doubts, showing heavyweight pop, a heavyweight chin and incredible boxing ability. Even as boxing lost its biggest fight before it could happen, the heavyweight division gained a new star on Saturday.

If we’re ever going to see a Super Bowl-type heavyweight championship fight featuring Fury and Joshua, AJ will have to score revenge on Usyk the same way he avenged his loss to Andy Ruiz Jr.

Only I can’t see it happening. Joshua will have an opportunity for redemption — there is a rematch clause in the contract that must be activated within 30 days. However, if he does indeed do that, Usyk might finish him the second time around. Unlike Ruiz, Usyk won’t come into fight night out of shape. And there was nothing fluky about this win.

This was boxing in its finest from Usyk, who beat Joshua to the punch, and somehow, was the most heavy-handed fighter in the ring despite being the far smaller man. Usyk was dominant at cruiserweight, becoming the undisputed champion at 200 pounds, but he looked shaky in his early days at heavyweight, especially his second bout in the division — a hard fought win over Derek Chisora in October.

On Saturday, Usyk was anything but shaky. He was light on his feet and used plenty of angles. He hammered Joshua with overhand lefts and double jabs. Joshua’s right eye was badly damaged, and he took a long time to get off the stool after the fight. His promoter, Eddie Hearn, believes Joshua’s eye socket could be seriously damaged.

“I don’t think it was a great performance from AJ,” Hearn said. “He looked tired as the fight went on. … I think the rematch is very tough, but there’s absolutely nowhere to hide.”

Joshua said before the fight that he would exercise the rematch clause if he lost, just like he did when he lost to Ruiz. Hearn said after the bout that he’s confident Joshua will still want the rematch, despite being dominant from bell to bell.

What’s more clear: it’s hard to see Joshua ever returning to his post as one of the two best heavyweights in the world. It was surprising to see AJ come in light (for him) at 240 pounds and attempt to outbox Usyk. That was never going to happen. And mentally, he was a beaten man as he sat on his stool. Ever since he was stopped by Ruiz, it’s been apparent his punch resistance — and Joshua’s confidence in his own chin — is suspect at best.

The heavyweight champions at the moment are Fury and Usyk. Fury meets Deontay Wilder for a third time next month, and another win was supposed to set him up for a high-stakes showdown with Joshua in Saudi Arabia in 2022 that would net both boxers nine-figure paydays.

With Joshua upended, maybe Fury turns to fellow Brit Dillian Whyte, who’s been waiting for his crack at the WBC heavyweight title for years. That’s assuming, of course, that Furybeats Wilder again.

Usyk’s path is more clear. He’s now one of the three best pound-for-pound boxers in the world, along with Canelo Alvarez and Terence Crawford, and the second best heavyweight in boxing after Fury.

As Usyk stakes his claim to the No. 2 spot in the heavyweight division, the best fight for him, the division and perhaps the sport as a whole is a matchup with the winner of Fury-Wilder III.